Today I decided I’d ride outside no matter what. Yesterday I avoided the 30+ mph winds by riding at the Velodrome. I put in a hard 30 miles in 1:38. It was a great workout, but at this point in the game I need more time in the saddle than that.

So, today I set a goal of at least 40 miles with a stretch goal of 50 miles. Keeping a moderate, sustainable pace and a low heartrate was a secondary goal of this ride.

It was just over freezing when we fed the ponies their breakfast and not much warmer when I headed out at 10:30am. My plan was to ride southwest to Lyons or CO36 towards Boulder.  The skies to the north were DARK and threatening (I think there was snow in those clouds!) and I definitely wanted to avoid them. But, as I rode south I found that the dark, threatening skies were enveloping me and winds gathering speed all around! I only got as far as Woodland St. and had second thoughts. Not about the route — but about riding outside today at all!

I turned east and then north towards home into the dark  skies and winds.  I applied “positive thinking” to the situation, adjusted my position to maximize my power and just leaned into the work. As I neared home, the snow started to fly and I was convinced that my ride was almost over for the day. As I cruised into our driveway, the sun poked through and I could see the front range mountain ridge again. Almost like a miracle! Since I was home, I stopped in briefly but left within a few minutes. No more threatening dark skies so I was back on a mission to get my miles in.  Only the winds remained — and they stayed with me the rest of my ride. 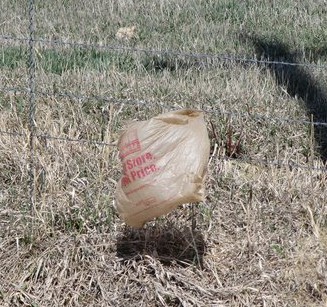 A King Soopers bag works great as a wind indicator. There was one conveniently stuck to a barb wire fence. 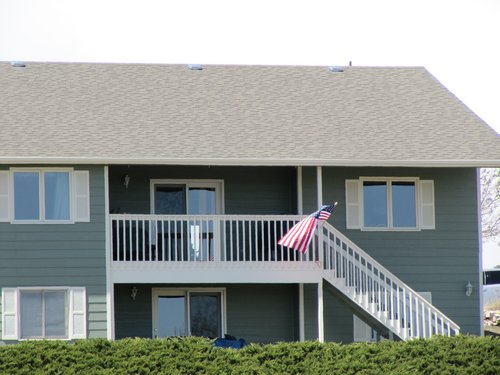 A bit later I passed a house with a flag on its porch -- telling me the same thing! There was definitely a wind out there!

At the top of the climb, the Ranger Station flag told of an easterly wind.

Funny thing about wind — there is such a small sector of the circle where you get the benefits of a “tail wind.” Today’s winds were variable in both direction and strength. The one common theme of the day was that the wind was never my friend! It was a great training aid though and the crosswinds I experienced were steady and I can deal with those just fine. It’s the gusty winds (either head or cross) that stress me out. Having to constantly adjust to gusty winds is exhausting as well as dangerous!

All in all, the ride was positive. I hit a convenience store on the way back to see how I would fare with their beverages and snacks. The G2 gatorade gave me an acid stomach but the 2 Fig Newtons cookies hit the spot! I’ll have to try a different beverage next time. Actually, I should try as many as I can so I at least know how my system reacts to them all. I see another spreadsheet in my future….