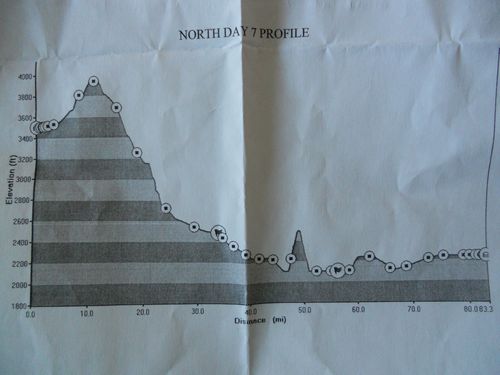 This was our last full day in Oregon. Nice to end with a downhill! Geesh, this is a wide state! And, it is just as diverse as it is wide. To think that just a week ago, we were at the Pacific coast in lush forest and today we went through sage brush with hillsides covered with scrub brush and brown grasses.  I was told by a local at our second SAG that we needed to watch out for rattle snakes (like I’m not already!). He had a large stick mounted on the handlebars of his bike so he could encourage them to move along if (when?) he came upon one. From the photo you can see that I use the term bike loosely — it really looks more like a tank! 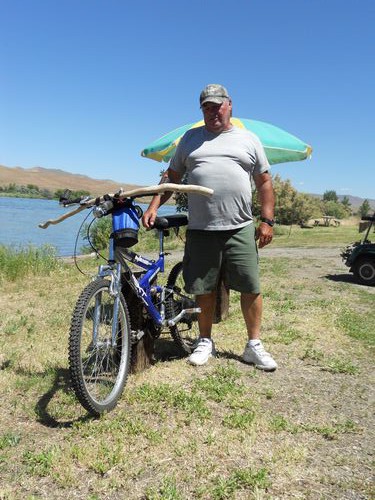 Early in the day we got our first taste of riding on the interstate as a group. Many of us have done this before and I-84 on a Sunday is a piece of cake compared to I-70 on a weekend! Traffic was light and the shoulder was wide and clear. I remember reading blog entries from year’s past about this stretch and debris on the shoulder was a big issue. Didn’t seem to be today. We did have a little tricky section where they were doing construction. As far as I know, everyone got through without incident.  Leo is a very experienced rider and had no trouble even when the big rigs came up along side him. 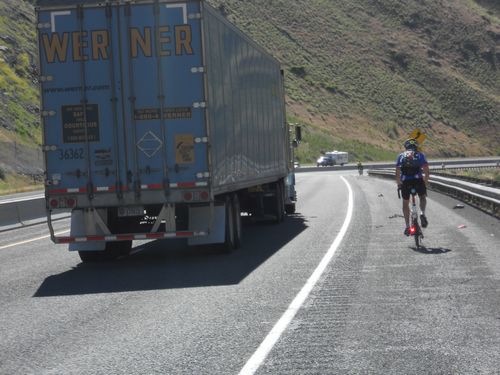 You can see from the profile that we lost quite a bit of our hard earned elevation. The winds were variable.  Up until the last 20 miles or so, the winds were mostly favorable or only moderately annoying. I’m not sure where the winds were coming from during that last stretch as I was tucked in behind Michael and Matt’s tandem or Leo’s Bike Friday most of the way — and when it was my turn to take a turn at the front, I just grabbed my drop bars and leaned into it. The winds must not have been straight on though because we were really hauling (between 18-21 mph the whole way!).  Even so, my average heart rate for the day (includes our short stops, climbs, descents — everything) was 105 and my max heart rate was 157.  I have found that while riding, I track three values from my Garmin pretty closely — my heartrate and cadence and the grade. A distant fourth is the current elevation. So far, all the values are within the ranges I had hoped to maintain on this ride. If anything, my heartrate is a bit lower than I expected. I am reluctant to increase my intensity since I’ve never done so many ride days in a row without a long break before. As it is, I haven’t felt spent when I finish and I haven’t had any trouble getting up and doing it again. So, I think I’ll just keep doing what I’m doing.

There was a SAG stop right after we got through with a stretch of the interstate. I’m not sure what this stone structure is, but we thought it looked like a castle and should be scaled! This is the group of guys I ride and hang with most of the time. This is the same group that took the road (climb…) less travelled the other morning when we left the casino. The trip mechanic, Jim, referred to us as kinda like a bad penny when he stopped to help with my flat — that we just kept turning up! So, now we refer to ourselves as the four bad pennies… ah yes, but there are five of us aren’t there…. well, when Todd  (standing, center in the photo below) joins us were a “bad nickel.” The bad pennies are (l-r, standing) Leo, Todd and Rod. I am sitting to the left as you look at the photo and that’s Andrew over there across from me on the right side of the castle.  We have a running joke about castles back at work, and I was tempted to see how much it would cost to have this one shipped back to Colorado for installation into our new facilities. Would probably spruce the place up a bit, eh? 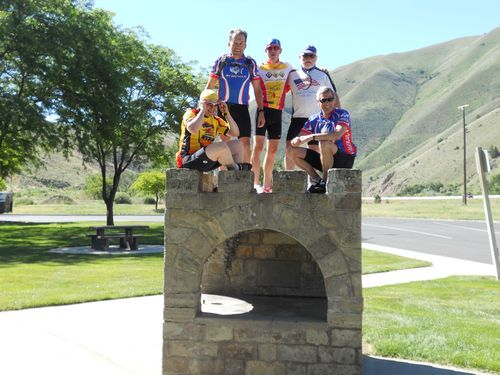 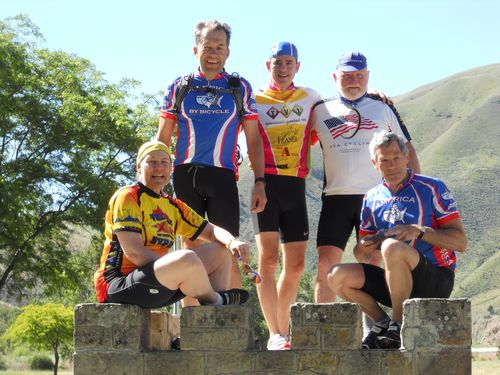 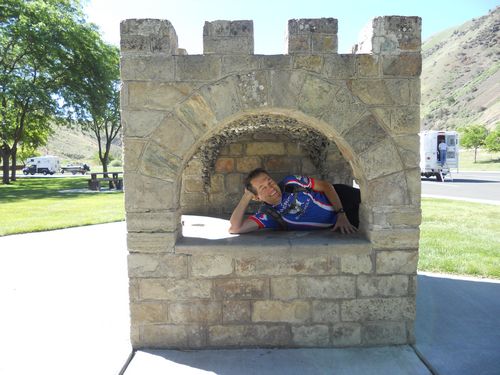 I’m starting to get a good feel for how much folks from previous rides enjoyed their experience and how special the relationships built with the staff and fellow riders is. At this same SAG, we were treated to fresh strawberries and HOMEMADE oatmeal bars by a wonderful gal who rode this same ride two years ago. Now, let me be clear — she knew no one on this year’s ride, yet she asked if she could come to our SAG and make is special for us!!!! To me, this speaks volumes. Her face absolutely lit up as we swapped stories with her and as she saw just how appreciative we all were of her and for the homemade goodies she brought along!

It was hard to leave that rest stop — but we didn’t linger because there were still many miles to ride and there was the threat of extreme heat and an unfriendly wind in the afternoon. We rode on through Huntington — home of the Huntington Locomotives (we rode by their football field and track). 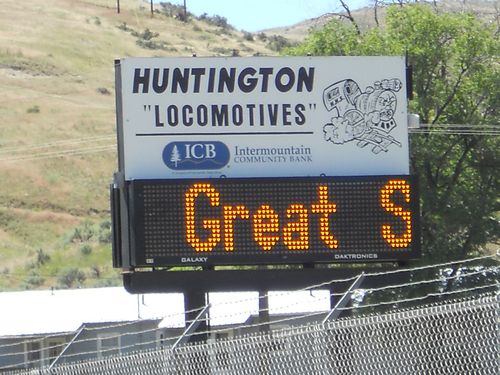 Not sure what keeps this part of the state busy, but this was sure a sleepy little town. As we rode into town, we passed a train….no, a truck….no, I really do think it was a train — with a truck — on the tracks.  Whatever. 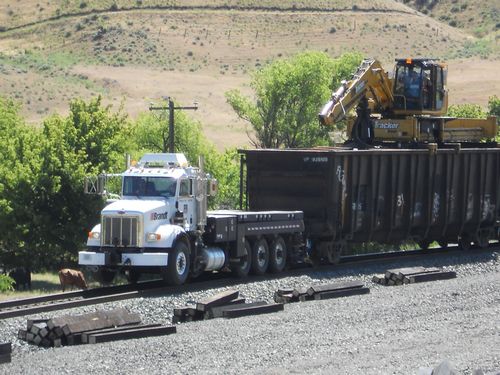 After a week of riding, I think we’ve seen everyone’s riding jersey collection. However, I must’ve been riding with a different group of folks the last time John (left) and Mark wore these. John’s is a wild Shrek motif and Mark’s is Ride for the Cure. Mark is doing this ride as a benefit — check out his blog for details, www.MarksTrek.com. He also has links to about a dozen other blogs (mine included, I think). 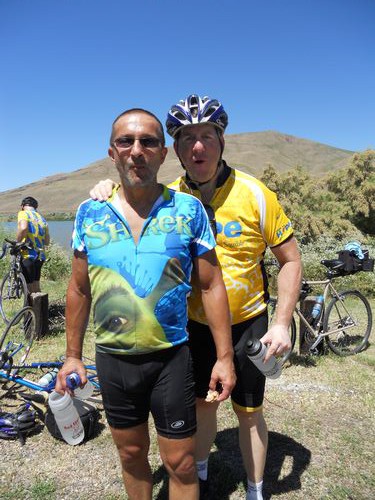 Since I rode the last 20 miles at break-neck speed, I finished relatively early – there were 15-18 people already signed in when I arrived. And, the early finishers get the special privilege of unloading all the luggage from The Box Truck. 54 riders…time 2 bags each…. getting lifted up to and down from the bed of a box truck. It’s almost as bad as doing hay at our farm in the summers!…. Almost.

Well, my parting shot for today is the sign we all saw as we rode up to our lodging (which is very nice). That’s Steve in the red shirt. The staff everywhere we have stayed has been just wonderful. Most of us tend to arrive in a pretty short window and since our group is so large, we often fill up the entire place! At least the hotel didn’t have to feed us tonight too — we ate about a half mile away or so at a the Sizzler restaurant. Really good salad bar along with a small steak and a baked potato. What more could I ask for? 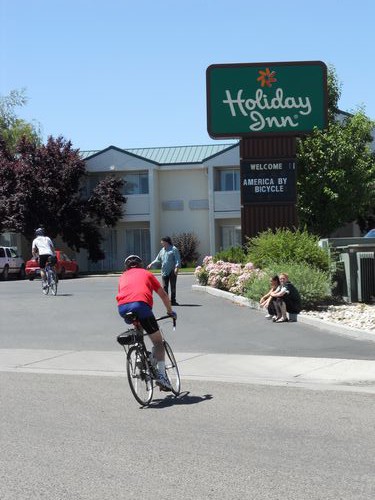