Just when I think it couldn’t possibly get any nicer outside — it does! Of course, it might have been about the same as Friday when I rode with Eddie (Dave Newport) but today I put thin wind/rain booties over my winter riding shoes so I was nice and toasty. The air temperature was in the upper 40’s, low 50’s but felt quite a bit chillier when we were flying down the hills after climbing.

As usual, Sara brought out my best effort. Both of us are competitive — with ourselves, and to a lesser degree, each other. It’s not so much that we need to be “better” than the other. For me, I want to make sure I’m putting out as much effort as she is on a ride. I don’t want to be seen as being a lazy rider!

I left the route selection up to Sara — much the way I left Friday’s ride up to Dave. Sara chose to ride to Carter Lake….but instead of doing the ride in its “normal” clock-wise direction, she chose to do it backwards. That is the tougher way to tackle the ride. Going backwards means we had to climb up the “killer hill” from the north. Sara did this to avoid riding up the hogsback — which, as we all know, is one of my favorite little climbs. A very gradual 2-3% grade hill. So I don’t exactly follow Sara’s logic. She’s willing to take on a quarter to half mile climb with sustained grades between 9-15% to avoid about a mile of 2-3%. Not a good trade in MY book! That being said, I love the challenge of the “killer hill”. I should have taken a photo of it as we approached today. I’ll get one next time, I promise. You can tell it is a steep climb just from the way the road wraps itself around the hillside.

We came upon a sizable herd of elk as we rode DOWN the hogsback. They were off in the distance, but there were so many of them that they caught my eye as we were riding along. 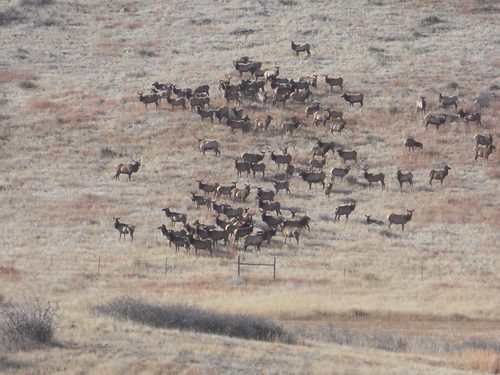 To give you an idea of how far off they are, here’s a photo with Sara in the foreground. 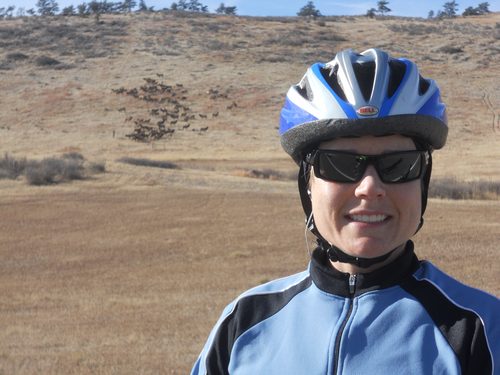 Now about “THE’ climb…. Before heading up, both of us took off our outermost top layer and our gloves. We knew that we’d be overheating in no time. I started off first and hit the hill ahead of Sara, but within a minute or so, she caught and passed me with ease. Both of us were riding fairly well, however, I out weigh Sara by about 30-35 lbs and that meant I was working a lot harder to get my “mass” up that hill than she was. Gravity is a tough customer! When she went by, I did not hear her breathing — although, I’m guessing she found it a challenge as well. She quickly put 25-30′ between us before I found my breath and started to inch closer. I had set a personal goal for the climb to be with her (or ahead….) when we crested to the first plateau. It took some serious effort, but I managed to close the gap and pull ahead right before the top of the climb. My heart rate reached 170 — doesn’t happen often for me anymore — and I was breathing about as heavy as I can remember in recent times. It felt GREAT!  We rode together from that point to the second (shorter) and final climb. Sara spurted ahead when the road turned upward and my legs said that it was unfair of me to ask so much of them so soon after their last maximal effort. As a result, I wasn’t able to attack the climb. Scooter and I made good time, but we were no threat to Sara on that one!

Carter Lake was just around the corner once we’d gotten to the top. Carter Lake provides water to area communities — irrigation water for sure and I think household (drinking) water as well. Sara and I were both shocked when we saw how low the water was. In the 16 years  Beth and I have lived in Berthoud we’ve seen the water at just about every level imaginable.  A few years ago, the took most of the water out to do dam repairs…. no, dam is not really the adjective there, maybe I should rephrase that…. to repair the dam. Anyway, today the water seemed that low again. Not sure if they’re doing more repairs or not. Since we haven’t had any significant rain or snow in a couple of months (or more?) then it could just be that low!

Here what we saw — 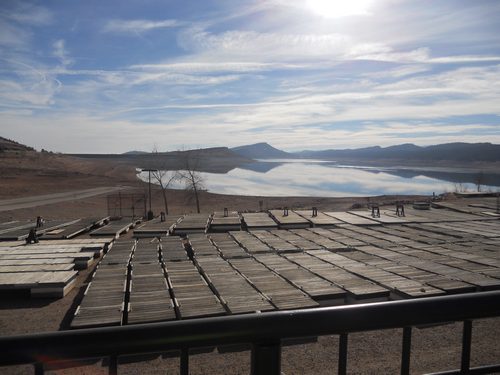 Those are boat docks in the foreground. As you can see, the water is a loooong way away. 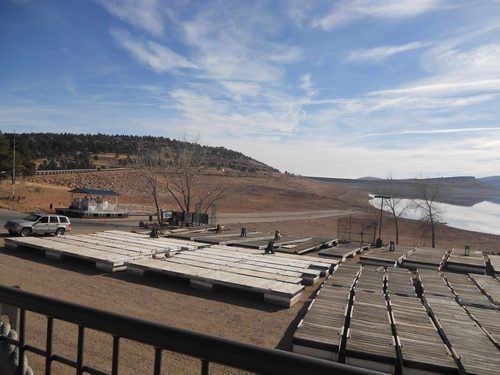 This shot was taken looking a little to the left of the last one. It is not uncommon to see the water up almost to the road running along the ridge at the left side about half way up the photo. 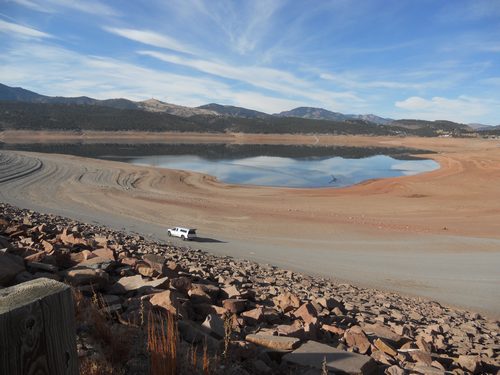 This shot is taken from the other end of the lake. There were a couple of trucks out on the lake bed with metal detectors. Wonder what they found? I joked with Sara that they probably picked up a bunch of fishing hooks in their tires! That would have been my luck anyway. 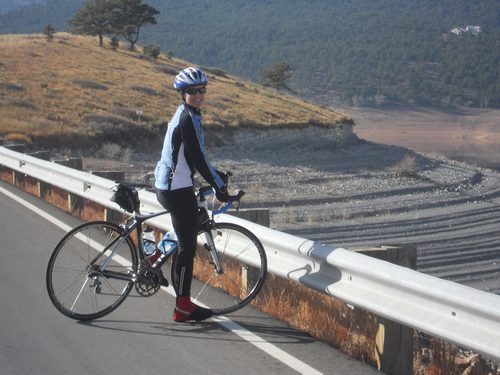 Again, a spot where we’d usually expect to see the water as we looked to our right. Today it was as dry as a bone!

The could’ve spent more time just looking at the lines made be receeding water. Reminded me of the Japanese sand drawings. Beautiful.

The weather is supposed to stay nice for a couple more days. Then, with any luck (I can’t believe I’m saying this…) we’ll get our first real storm of the season just a 2010 comes to a close.