It was down right dark when Scooter and I pulled out of the driveway at 5:48am. I had an eye-catching red-blinky light attached to the back of my helmet and Scooter had one on his rear triangle. I also wore lots of reflective clothing — especially on my feet and legs. Research has shown that reflective material on the body parts that are moving is much more effective than when it is on clothing worn on the cyclists torso which remains fairly still while riding. We also had our super bright head light mounted on Scooter’s handlebars. So, even though it was VERY dark out, we didn’t have any problems seeing — or being seen.

I took the long, safe route again this morning.  There are relatively short stretches at the beginning and end of the ride I feel a bit exposed to traffic. The frontage road that parallels I-25 doesn’t really have a shoulder to speak of, but it is lightly travelled and pleasant to ride.It took me just an hour to get from the farm to the I-25 overpass. From there I headed south on the frontage road for a little over an hour. As I got closer to work, the winds picked up a bit (out of the south & west). It wasn’t anywhere near as bad as Sunday, but it was enough that it noticeably impeded my progress. I had a customer meeting today so I could not afford to just kick back and go at any pace the winds dictated. Luckily, I was able to increase my effort just a little and make up enough time that my meeting was not in jeopardy. Perhaps it was because I got up so early, but by the time I got to work, I was a little tuckered. Some days are just like that, I guess.

I didn’t have Subby at work today, so I ended up riding right up to — and into — the building. Off to my lab to get my work clothes and shower stuff then off to the shower on the main level (as oppsed to the fitness center at the far end (and downstairs) of the building). To say I was disappointed is a bit of an understatement when I got there only to find a freezing cold shower!!!! UGH! No matter how long I let the water run, it never warmed up. I think it might have actually gotten colder. I should check the records because I think I may have taken the fastest post-bike ride shower in history! BRRRRRRRRR.

As always, I was glad I’d ridden in. I felt like a true adventurer as I rode along in the dark. I do believe this is the first time I’d ridden a significant part of a ride in the dark. I’ve avoided it in the past as I think riding in the daylight is safer, but I found that I was alert and focused on everything around me so I actually felt pretty safe out there on Scooter. I think this I could learn to enjoy riding in the dark.

Here are a few photos I took this morning on the way in — they were taken shortly after I started to head south on the frontage road. Before I came to the I-25/119 interchange. 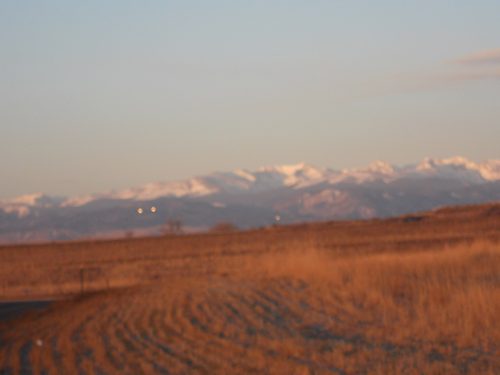 The mountains are my constant companions when I ride the frontage road. I never tire of looking over at them — they are very impressive! 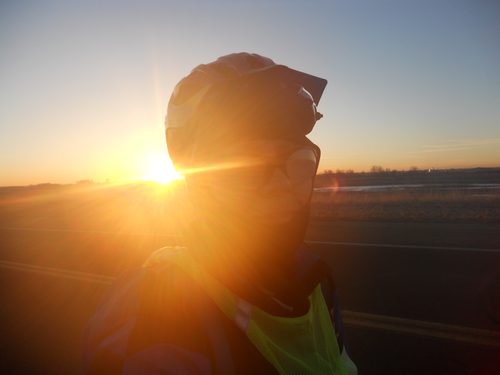 For a brief minute I forgot that the sun had come up! Oops, I guess I should face the sun and take this picture, eh? 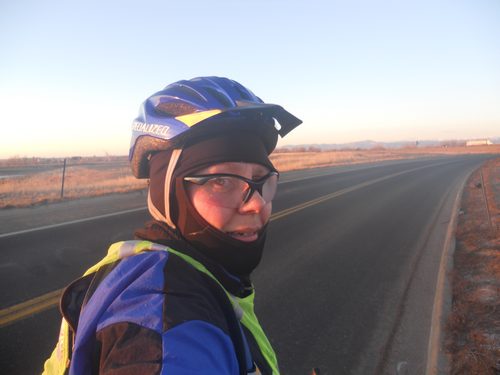 Ah, so much better. Well, kinda. I look pretty bundled up here. I almost didn’t wear my heavier jacket because it was supposed to be at least 30 degrees. Well, it wasn’t anywhere near 30 degrees. Maybe 20-25 degrees!  CHILLY! 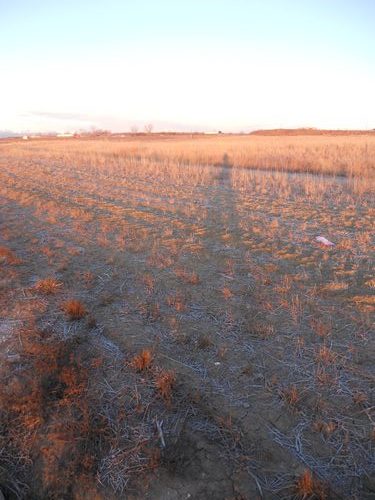 The ground was dry, dry dry. The mountains are acutally off in this direction too — but the angle must be wrong since they seem to have gotten cut off. Looooong shadows at 6:30am in these parts. 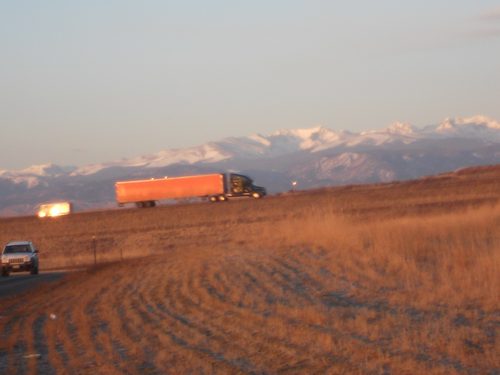 There are those pesky mountains! That’s I-25 and all of its early morning traffic. You can certainly hear the traffic from the frontage road — but it still feels more like riding on a country road than the highway.