No Garmin today — and a bummer because the data would have been fascinating (at least for some of us). I rode home from work this afternoon. It almost didn’t happen though. When I went in to the fitness center to change, there was a very mild breeze and the temperature had to be close to 70 degrees F.  Not 15 minutes later, when I came back out, the wind had picked up considerably and was blowing with some force out of the west and southwest. It was so strong, that I debated whether or not to head out on Scooter.

After taking both sides of the argument a few times, my desire to ride won out. Scooter and I hustled to get out of the parking lot as quickly as possible before the riding conditions deteriorated any further. It was immediately apparent that anytime there was even the slightest westerly component to my path, I would be struggling to make progress. However, whenever I headed north, I got a push on the left side of my back and we sailed along. Sometimes it was actually more of a shove! That’s not to say going north was easy – it was not. Scooter and I had our hands (and tires) full trying to hold our line. I used lots of core strength to keep from being blown around. Luckily, when a gust came, it usually came from my left which would merely push me off the road into gravel or a gutter. Not great, but much better than getting pushed into traffic. Given the conditions, I also took CO-287 home since it has a really wide shoulder. Unfortunately, that route dumps me at the southwest end of Longmont and there is no easy way to get across town. I ended up having to ride on the sidewalk and crossed at least two dozen streets and driveways which were by far the scariest part of my entire ride! I was super cautious — which slowed me down considerably. I made it though, and that’s what really matters. Even with the delay in getting across town, my average speed today was 17.2 mph over the 33.8 miles. Max was 39.5 mph and I arrived home in 1:57:21. Not bad for an early spring ride. And, just think, with any luck, I’ll get to ride back in tomorrow. As I write this, the wind is howling outside. Hope it blows itself out tonight so when I get up tomorrow morning it is perfectly calm! Here’s the wind chart for tomorrow….that peak is over 40 mph! UGH!  I don’t have to go west very far…. but, the cross winds could be hellish. 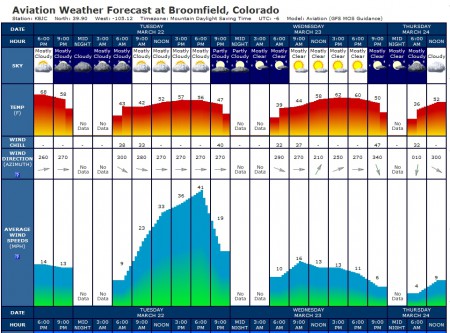 I have to share one story from today’s ride. I was flying northward on CO-287. I had to be going close to 30 mph at the time. There were rumble strips to my left and I was watching them as well as steering around rocks and debris on the shoulder. I’m not sure how long my focus had been right in front of me and I’m not sure why I looked up and down the road a ways ahead of me. But, it is a real good thing I did because there was a car parked directly in my path not more than 25-30 yards ahead of me. If I had stayed focused on the rumble strips or the debris a few seconds longer I might have found myself smashing into the rear end of the car. That would have hurt….a lot!!!! It reminded me of the America By Bicycle cross country ride. Mike Munk told us that one of the guys that did the ‘Fast’ ride (that ride averages over 100 miles a day) DID run into a parked car. At the time, I couldn’t imagine how that could happen. What else do you have to do when riding a bike but look ahead. Well, now I know. You can get mesmerized by stuff that is closer to you and lose sight of the big picture. I’ll be watching to make sure I don’t do that again any time soon.

No camera today either — wish I had it. I would have liked to show you the smoke plumes from the Golden Gate Canyon fire that is raging right now. The winds that tossed me around are whipping up the flames of that fire. Not good. There was visible smoke northward along the foothills all the way from Golden to Ft. Collins. My lungs didn’t bother me, but they might tomorrow.