It was a clear case of “on again, off again.” Two days before Team Evergreen’s Triple ByPass ride a co-worker came up to me in the break room and offered me her sister-in-law’s spot in the ride. The ride was sold-out and earlier in the week I had gone to their website in hopes of getting a late registration. Funny how things work.

I pondered it through-out the day and found that although I really wanted to do the ride, I didn’t want my co-worker, Kerri, and her fiancee Chirs to have to wait hours on end for me to finish. Last year, Kerri rode the 120 miles in 7 hours (total time…not just riding time!) The first time I rode it in 2008 it took me 14 hours and 11.5 of them riding. The next year, I shaved 2 hours off my riding time coming in around 11 hours with 9.5 hours riding time. I couldn’t hope for the same improvement this year.

As I was driving home I figured out a way for it all to work. I could ride part way – say to Breckenridge or up Vail Pass and when Kerri finished, she and Chris could come back and pick me up on the way home. I felt good about this solution so accepted the offer.

Wouldn’t you just know it that on Friday, Kerri caught me in the hall and gave me the bad news that her sister had given the slot to someone else before Kerri could let her know that I was interested. So — now what?

I was already pumped to ride. Kerri and I plotted and schemed. In the end, I decided to ride the route anyway, just not as an official rider. And, I’d provide all my own water and food. I didn’t rule out the possibility of using the organized ride’s port-o-lets though. 😉

Since I was such a late adder, there was no time to arrange a hotel room closer to the start — and I offered to pick up Kerri on the way in the morning. This meant I had to get up a 2:45 AM. Hell, that’s the middle of the night!!! I tried to go to sleep early but had trouble drifting off to sleep. No doubt it was partially due to the heat but also because I was excited to be doing the ride. As usual, I woke up 10 minutes before the alarm was supposed to go off, and miraculously, my head was not full of cobwebs when I got up. Thankfully, I have a well established routine for mornings when I’m heading out for an early ride. I followed that and got on the road with plenty of time to spare. When I got to Kerri’s apartment, she had just gotten up — but was out the door within minutes! It was dark on the drive, and starting to get light when we got to Evergreen. Kerri headed off to registration and I packed my stuff and hit the road at about 5:45 am. I was not alone! There were already large numbers of cyclists heading up the road to Squaw and Juniper Passes.

My goal for the ride was to keep my power numbers within a very conservative range and under a maximum of 160 watts. I’ve been practicing this style of riding for almost two weeks now and am starting to get the hang of it. At times, I have to back it off so much that I’m crawling along at 4.5-5 mph (and everyone in the world seems to pass me!). However, at other times when fellow cyclists are coasting along, I am going considerably faster since at those times, I am still keeping my watts in range and not coasting at all. The benefit of the consistency is that I don’t surge and my muscles don’t get depleted.

The ride up to Echo Lake is one of my all-time favorites. About half way up a black fox, complete with a white tipped tail, trotted across the street about 20 yards ahead of me. There were a handful of other cyclists riding with me and we were all awe-struck. That sighting made the entire day worthwhile, no matter what happened after that moment.

As I was riding along, thanking the volunteers and striking up conversation with fellow cyclists, I totally forgot that I was not a ‘card-carrying member’ of the club. I felt like I was a legitimate Triple ByPass rider. The only difference was, I blew right pass the first rest stop and found my own rest area with forest service pit-toilets down the road a piece and right before the descent into Echo Lake and beyond to Idaho Springs.

The descent was awesome. Smooth road, mild temps and no rain or fog. I flew down faster than most. Pogo was super stable and I was very confident in my ability to descend quickly and safely. When we reached Idaho Springs, I stopped at the Kum & Go gas station for some peanut butter crackers and a bottle of water. Then off again for the long tedious climb up to the base of Loveland Pass. This is a 30 mile stretch of steady uphill that is very decieving. It takes longer and takes more energy than most cyclists realize. Everyone focuses on climbing Loveland Pass — which is only 4 miles — when they should be thinking more about how they will deal with the 30 mile approach. I kept my rhythm and my watts in range and just motored along. The only time I stopped was for about 30 seconds to by a bottle of Gatorade from a young vendor along the side of the road. She was making a killing. The Gatorade was free, but there was a glass jars with a handmade sign “Gladly accepting Donations”. The jar was overflowing with dollar bills!

The new bike path that takes you the last 5 miles to the base of Loveland Pass is fabulous. Before the path was created a few years ago, we all had to brave riding on I-70’s shoulder. Let me tell you, there’s nothing quite like riding along at 8-10 mph while being passed by numerous 18-wheelers going 55-60 mph! I’ll take the bike path any day. I did hear several cyclists whinning about the short steep hills on the bike path. I’m not sure they’d ever ridden the highway version before or I doubt they’d have been complaining.

I confess, at the end of the bike path, I stopped and refilled my water bottle at the official rest stop. I also got a bottle of Muscle Milk that I’m sure helped propel me up the pass. The ride up the pass was interesting. I found myself passing many of the riders who had passed me earlier in the day on the climb out of Evergreen. My coaches approach was starting to pay off. I still felt relatively fresh (after almost 60 miles and 7,000′ of climbing!) and chugged up the hill with the same effort that I’d be putting out all day. I reached the summit easily and didn’t even stop. I took a few pictures of dark storm clouds while I rode over the top and moved into my descent position with my hands on the drops and my head tucked tight to the handlebars. It looked like there was a nasty storm to the north. Thankfully, it looked like it was already past us and that we might get down without getting wet.

A short way down the hill, maybe a quarter of a mile, I feathered my brakes to make sure they were working and to my great surprise, the front brake lever did not grab at all but pulled all the way to the handlebar! Immediately I realized that I must’ve forgotten to flick the little lever that opens the brakes and allow you to put your front wheel in place. Using mostly my rear brake, I manage to slow to a stop; flicked the lever; retested the brakes and started off again. That could’ve been nasty farther down the descent when I would’ve been going in excess of 35 mph. (Guess I didn’t brake much coming down into Idaho Springs since I didn’t notice the problem until the second major descent!) The rest of the ride was delightful. The only thing of note was that I passed another rider whose bike was shaking like a leaf. He was obviously trying to get it under control and to a stop. My guess is that his front fork was very loose. Hope he made it down safely! A clear reminder that you should always check your bike before a bike ride!

I cruised into Keystone and started to think about the next leg of the journey. My thoughts got interrupted by three or four big splats. I knew these were ‘warning’ drops. That in a few more seconds there would be a down pour. That storm must not have moved to the north like I thought, or another one was right on its heels. I don’t know if you’ve ever experienced these drops — they are not the light drizzle that somes with a slow, all-day rain. They are massive, plops that come in advance of nasty storms. There have been times when I’ve missed the warning and gotten drenched. Not this time! I high-tailed it for cover. Luckily I was right near a strip mall and able to get to the covered porch of a business within seconds. And, none too soon. The skies opened up shortly after I ducked under the porch and sheets of rain started falling. Lightning lit up the mountain side and a massive number of riders started coming in off the road to seek cover. The riders that came in after me were soaked to the bone and shaking. Some were shaking so hard that I was amazed they were able to handle their bikes. Some said that it had rained on them since before they crested Loveland Pass! Those poor riders.

We all watched as it poured. It kept up for a loooong time. Riders were texting their SAG support and bringing up weather radar on their smart phones. Gotta love the technology. When it did let up a bit, I ventured out to see what weather was coming at us from the south. It didn’t look any better! After 45 minutes of waiting and watching, I decided that I was done. It wasn’t worth risking injury in wet, slippery conditions with low visibility. I had already cooled down and the thought of going back out to ride in more storms just seemd insane. (That’s not to say I haven’t done exactly that before…but on this day, I just wasn’t up for it). I sent a text-message to Chris who was driving towards Avon on I-70. He swung by and picked my up on the way. While I as stuck in Keystone, Kerri was stuck on the top of Vail Pass! She was that far ahead of me!!!! There was a break in the storm where she was, so she decided to take the last downhill section into Avon and finish the ride. What an animal! Chris and I arrived in Avon at exactly the moment that Kerri finished. Our timing could not have been more perfect. It was not raining when we arrived, but clearly it had been recently and, of course, it started up again shortly after we got there. By the time we left, all three of us were soaked. Happy, but soaked! 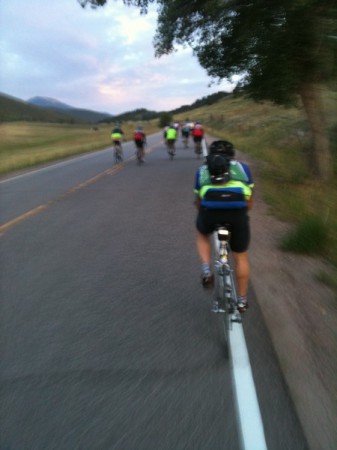 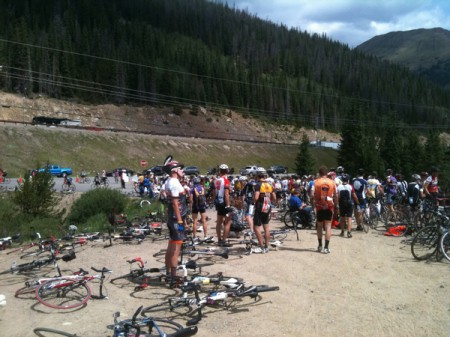 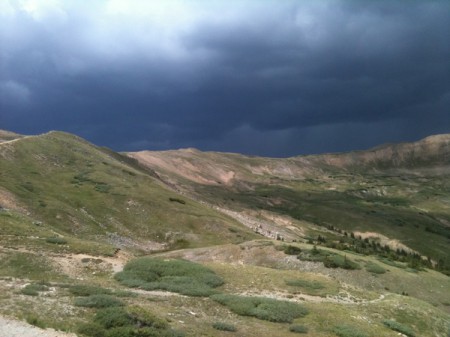