You can hardly squeeze more pain and suffering…and fun into one weekend!

This was my first time to experience the Superior Morgul in all its glory. I was signed up to compete last year but due to nagging calf muscle injuries I was a “DNS” (Did Not Start) for the event. This year, I started getting nervous about the event at least a week earlier, probably more. The thought of three all-out races in three days and knowing that “The Wall” was an integral part of two of those races made my stomach do flips! Anyone who is reading this and has seen photos of me will quickly agree that this race really does not suit me. I am built for power, not climbing long, steep grades  repeatedly at race-pace.

The weekend started Friday evening. After a very cold, wet spring, wouldn’t you just know that at race time (5:42:00 pm) it was 88F.  At least I didn’t have to think much about how many layers I needed to wear.  No arm warmers, leg warmer or toe covers for that race! I found a place to park in the Rock Creek development just down the road from the start. Initially I planned to warmup by riding around the neighborhood but that didn’t go so well. The terrain made it hard to regulate my power output and there were these nasty speed bumps everywhere. Not very comfortable on Darth, my time trial bike. So, I rode back to my car and quickly set up my trainer. Within minutes I was sweating pretty good — but I needed to put in a long enough and hard enough warmup that I could go full gas right from the start line. I needed my lungs and legs to be ready to go 100% from a standing start. I was the first one to go of the four SW55+ cyclists. I would have preferred to go last so I could see my competition. No one asked me. Well, actually they did. When we registered, they let us pick our start time and silly me, I thought that’s the time I would start. Simple enough. But, no. A couple days before the event, an official start list was sent out. Why they gave us the illusion of picking a time is beyond me. But, I digress. My plan for the race was simple. Ride REALLY, REALLY hard up the initial incline to the point where McCaslin Blvd starts to drop to the round-about. Then, just keep my watts around 200 as much as possible. When I got the countdown…5, 4, 3, 2, 1 … I shot off the line like I’d been poked with a red hot branding iron.  I rode like I was being chased by a bear for the next quarter of a mile or so. That’s when the rode turned downward and I let up just a tad. I got down in a crouch and felt Darth pick up speed. My coach suggested I ride Darth instead of Pogo — even though Darth is heavier and I’d have to get him up The Wall. There was enough flat & downhill in the course that a TT bike would be an advantage. It turned out to be good advice. Darth roared down the hill and we made steady progress up the incline towards The Wall. I was surprised how quickly I settled into a rhythm and was able to maintain a pretty high cadence. The last couple hundred yards were tough and I had to come up out of my aero position and work the handlebars along with my pedaling to keep moving forward and avoid stalling out.  To our credit, we made it up without me getting out of the saddle. I would have loved to take a little break at the top, but I could hear my coach telling me to “Power over the top and get back up to speed as soon as possible!” And, she’s right. I think this is where I put some time into my competitors. They probably climbed The Wall faster than me, but I kept pressure on the pedals the entire race. I never let up.  On the next section along the spine of Hwy 128 I just kept pushing the pace until I got to the big ‘U’. Dropping down into the ‘U’ was fast and fun. There wasn’t much (or any?) wind to speak of so Darth picked up some serious speed again. I pushed my butt off the back of the saddle an rested my chest where my butt had been moments before. I cruised down the hill in this modified Superman pose and part way back up the far side of the ‘U’. When I felt my speed start to drop, I returned to my normal TT position and started pedaling for all I was worth. Up ahead was Renee S. who started just ahead of me. She was getting BIGGER!! That was most unexpected. She immediately took on the appearance of a rabbit. My rabbit!! The chase was on!  My legs were like pistons and I focused on my breathing and my cadence. With reeling in my rabbit, time seemed to be suspended and before I knew it,  I was at the top going across the last false-flat thinking I could catch Renee and  praying I was going fast enough to stay ahead of Ruth Alexander’s time. There was one more long down hill, not quite as steep, but steep enough that I almost out ran my gearing. About half way down the hill, in my Superman pose again, I flew past Renee like she was going backwards. I don’t think she expected to see me! Once at the bottom of that hill there was a short but nasty incline to the finish line. No time to let up now – time trials are often won or lost by mere seconds. I pushed as hard as I could all the way across the line. Then gasping for air, I slowly spun down as I made my way to the Hwy 93 light. For my cool-down, I retraced my path — but at a much more “conversational” pace!

When I got back and checked the results board, I saw that I had, in fact gone fast enough to win the time trial. I came in 40 seconds ahead of Ruth Alexander. The other two SW55+ were not ever a threat. They turned in good performances, just not good enough to compete with Ruth and me.

The crit was held down in a neighborhood of the Rock Creek development. I’m too tired to give all the details now. It was fast, it had hills and I easily held off Ruth for the win. This meant that I had also won the Omnium. Even if Ruth won the Road Race and I place second to her – I would win.

I hadn’t counted on Carla F. showing up to join the SW55+ road race! That was a shocker. This put my Omnium win in jeopardy. If Ruth won the race, Carla finished second and I finished third — I think Ruth would win the Omnium! So, I had to either beat Ruth or finish right behind her.  I had my work cut out for me! In the end, it went Carla, Ruth, me. Whew!

Just Ruth and me on the podium. I was on the top step. It was a sweet victory. I worked VERY hard this weekend and feel I deserved the win. 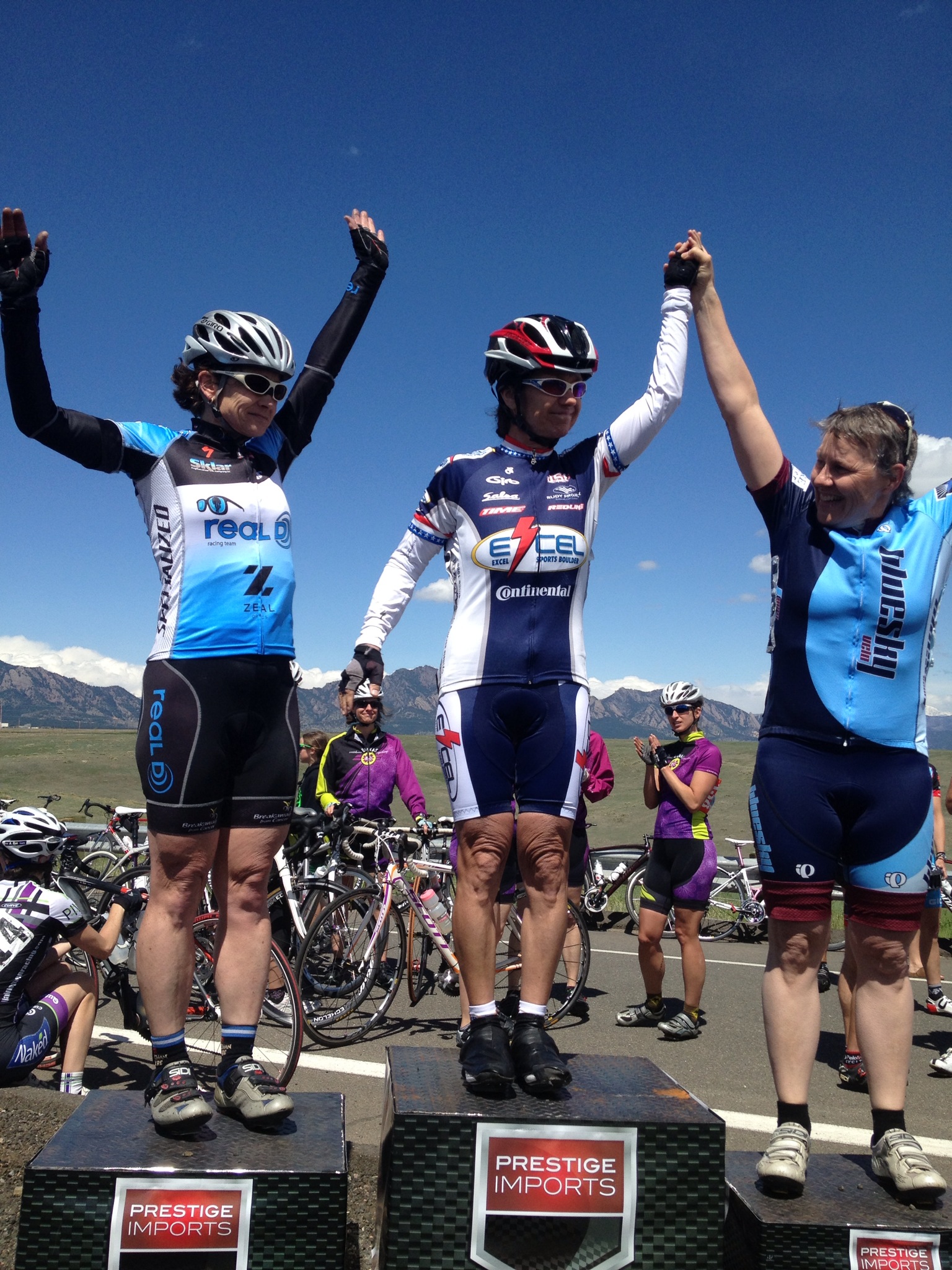 The Morgul-Bismark Loop is a popular cycling route or stage south of Boulder, Colorado. It was featured in the bygone Red Zinger Bicycle Classic and Coors International Bicycle Classic, and is still commonly ridden today. Riders who have traversed the stage include Greg LeMond and Davis Phinney. The course was also used by the Red Zinger Mini Classics youth road bicycle racing series from 1981-1992.

The loop is 13.1 miles (21.1 km), and includes undulating terrain and several steep inclines, including “the wall”, which is located at the south terminus of McCaslin Boulevard where it intersects with State Highway 128. “The wall” is a one-mile gradual incline that increases to a 12% grade.

It’s that laast part I want you to read again. The “increases to a 12% grade”. That’s the part that was a challenge about the courses this weekend.