This blog chronicles my 10 months of training leading up to a ride across the U.S.A. with America By Bicycle (www.abbike.com) and then, the journey itself!

This is the team that will do the cross country ride!

Riding a bicycle across the country has been in the back of my mind since the mid-80’s when a friend and I toured both the north and south islands of New Zealand for 6 weeks. On that trip, we did all our own route and lodging planning. Back then, New Zealand wasn’t the tourist destination it is now and even finding a reliable map of New Zealand was difficult. We carried all our gear and stayed mosly in youth hostels or small private B&Bs. We met some really wonderful people on that trip that we stayed in touch with for years and years after we got back to the states. On that trip, I came to realize that it just doesn’t get any better than traveling by bicycle, at a leisurely pace and exposed to all the sights, sounds and smells of the world around you. That first long tour in 1984-1985, now 25 years ago, planted the seed for this cross country trip.

Cycling has always been an important part of my life (got my first 2-wheeler on my 5th birthday), but after injuring my left achilles and severing the plantaris muscle in the same leg, it became my prime mode of exercise. After that first tour down under, I continued to organize tours with and for my women friends in Colorado. Our destinations have included – a second 6-week tour in New Zealand 4 years after the first one,  a whirl-wind tour of New England, coastal riding in Nova Scotia and on PEI,  a group ride with about a dozen women up into Wisconsin (from Madison on up into the ‘thumb’ of the state), two tours into the Canadian Rockies (Banff towards Jasper), island hopping in the San Juan Islands of Washington (I liked the island with the wild rabbits the best!),  a cold, wet ride in Alaska’s frontier (between Seward – Anchorage – Denali),  and a delightful trip to France that included delicious, fresh baked goods and produce as well as great interactions with the local folk.

In addition to these self-contained, self-directed tours, I have joined on to several local Colorado week-long rides that tackle the Rocky Mountains and a short leg of the Lung Associations “Big Ride”. The “Big Ride” was a multi-day event that I did a few years ago so I could ride with my friend, Jenny, who was doing the whole ride. Riding with Jenny brought the idea of riding across country back on my radar.  Since that ride, I’ve been doing research and had penciled in 2012 as the year I would do it. When my company changed their carry-over vacation policy in late 2009 (basically, you can’t carry it forward anymore), 2012 quickly changed to 2010! 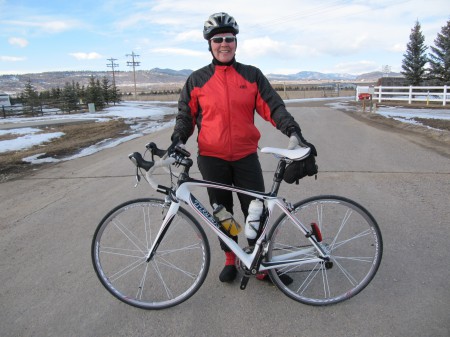 As for the Colordao rides, the two times I did Ride The Rockies the route went up and over Trail Ridge Road — a monster of a climb. I also did the Bicycle Tour of Colorado twice — taking me over Independence Pass and down into the southwest corner of the state. The vistas on all the Colorado rides are breathtakingly beautiful! These rides were also my first exposure to ‘supported’ rides. I quickly adjusted to not having panniers or sleeping on the ground and packing up wet gear every morning  (I always opted to ‘camp’ in the gyms of local High Schools). These rides and the training that leads up to them builds lots of physical and mental strength that will serve me well on the cross country attempt.

Most recently, I have challenged myself with the Triple Bypass ride sponsored by the Evergreen Cycling club. It is a one-day ride from Evergreen to Avon that traverses 3 mountain passes. The ride is 125 miles long with a total elevation gain of over 10,000 ft and most of the climbing is at elevations between 8,500 and 12,000 ft. Some of the training rides we did getting ready for the big day were almost as tough as the day itself. I live at the edge of the foothills and real serious climbing is only a 20-30 minute ride from the house. One of my favorite training rides is to leave from the house and ride up the Big Thompson Canyon to Estes Park. One day this past summer, my training buddy Eric and I did that but tacked on another several thousand feet of elevation by continuing to the top of Trail Ridge Road. That day was 90 miles with just over 7,000 ft of elevation gain. What made that ride partiularly difficult was that the elevation was all gained in the first 45 miles. We rode uphill for 45 miles without a break — then turned aound and headed home!

As you can see, riding across country fits into my riding progression. It represents the type of challenge I thrive on and will allow me to push myself a little bit (or a lot!) more than I have with these other rides. I’ll turn 53 a few days after we set out from Astoria, Oregon which will likely make me one of the younger riders on the tour!  I read that last year the average age ws 58! It will be interesting to see how I feel, now 25 years older than I was on that first New Zealand tour. Bottom line — I am anxious and looking forward to savoring every mile of the adventure and fully expect to ride just as well as I did back then (if not better!) and have just a much fun.

You can join me (kinda, sorta) by checking into this blog which I’m planning to update as I pedal the 3,800 miles across the northern tier of the country.