Another state down — Wyoming is now history!

To be honest, before we got through the state I was a tad concerned that we’d end up with hot, hot days and head winds that would push us backwards. Neither happened! By some miracle, we had VERY moderate temperatures and only a few headwinds that would qualify as “rather nasty.” 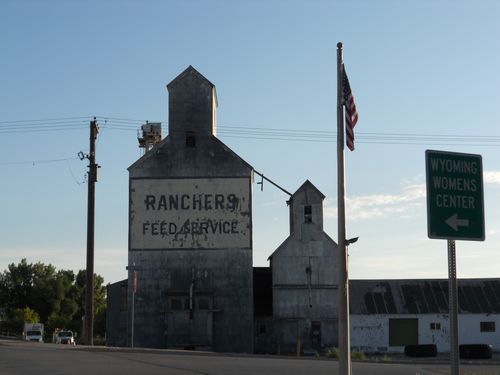 Once we left Lusk, today was even MORE desolate than yesterday. The photo above was taken on the way out of town. Beautiful country side — but we didn’t hardly pass any towns or even ranches. One of our SAGs was just a small dirt lot on the side of the road — no trees, no buildings, no nothin’.

As we roll out of town at 6:30am, we cast some mighty long shadows. I am always on the lookout for “shadow shots.” I took this one of me and Scooter and then one of Howard and Bob who were riding right in front of me.  Howard was wearing a Ben & Jerry’s Ice Cream jersey that his granddaughter gave him — she sure has good taste in jerseys. Howard looks great in it! 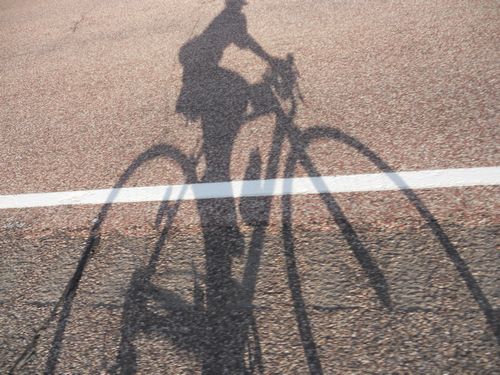 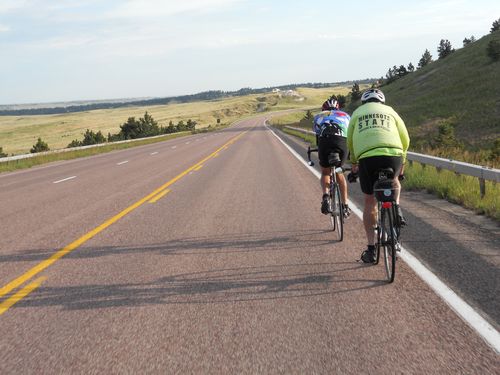 We had the rare opportunity to see that cattle gaurds really do work! These cows must’ve been watching all of us go by and just hoping that we’d be serving them a meal. No such luck! As you can see, they came right up to the guard and no further! Kinda reminds me of my 1/2 Angus cow, ole 52 that I co-owned with my friends in Nebraska. Ah, those were the days…. 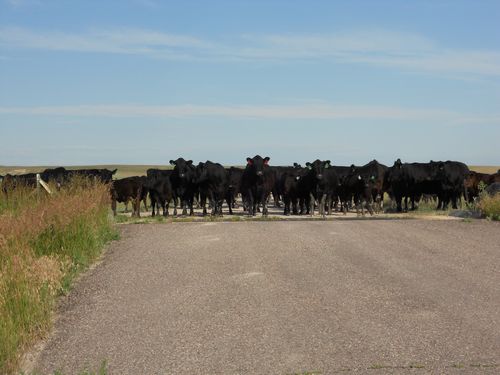 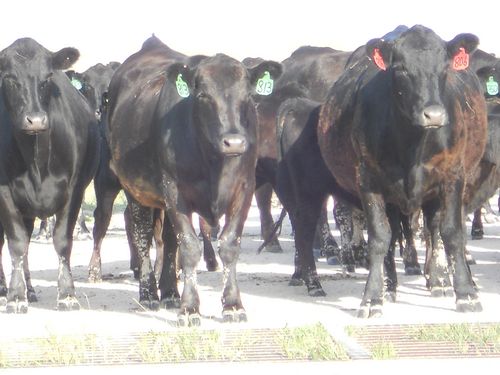 My SAG stop photo today is of Alison — in her “Super Grover” cycling jersey. Alison is one of our younger riders — and as with the other youngsters — she is a very strong rider and a joy to be around. Now that she is here on her own (Jay and Kay went packing a few days ago) she has really blossomed. She’s even joined the “Bad Pennies” a time or two and fits in with our group just fine. 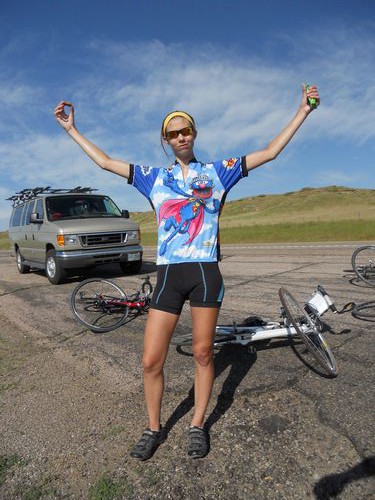 And, we were all happy when we crossed over into South Dakota! YAHOO!! Todd has the bike helmet on and Don is the one without any helmet at all….and almost no shirt for that matter! Don would prefer to ride without the tank top too, but ABB has rules about that. Don and I would make an interesting pair. I still have my long tights on in this photo, as well as arm covers. You see it all out here! 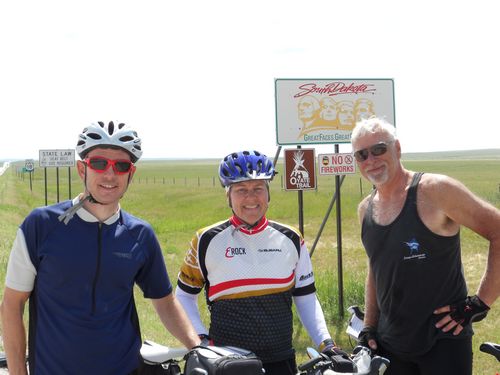 Our second SAG was a welcome sight! Barb had set everything up in a nice picnic area with trees. The shade was just what I needed. That and a pint of chocolate milk and 2 hard boiled eggs which I was able to get at the gas station that shared the parking lot with Barb’s SAG.  That’s Barb in orange and Shirley in her purple and yellow Northern Iowa University (I hope I got that right!) jersey. 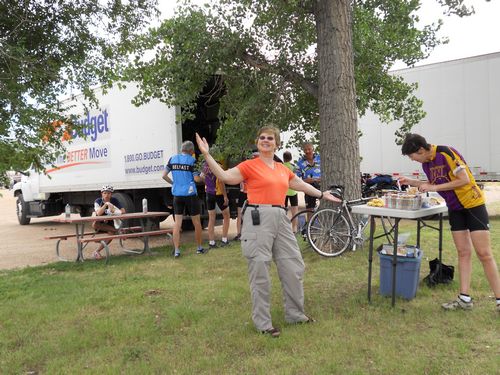 We probably lingered more than we should have — and when I started back up, my RIGHT calf muscle felt slightly strained. Not a good thing! I backed way off and just “limped” along for a bit. I sent Andrew, Alison and Leo on ahead and just tried to settle into a light pedaling rythym. A few minutes later I got the idea to take some ibuprofen. I think that helped. I still had the two big climbs to go, and visions of having to sag started to cross my mind. I listened intently to my body and didn’t push it one iota. As we approached the climb I noticed that some of the “about to pop” sensations were gone.  I kept listening…and adjusting…and was able to keep riding. Leo, who had stopped to take pictures (… which he did just so he could wait for me, I’m sure!) then rode with me and literally pulled me the last 12 miles into Hot Springs. Funny — he was taking pictures at a stop on the Mickelson Trail — where Beth, my sister Barbara and I ate lunch a few years ago when we came up and did the three day Mickelson Trail ride. 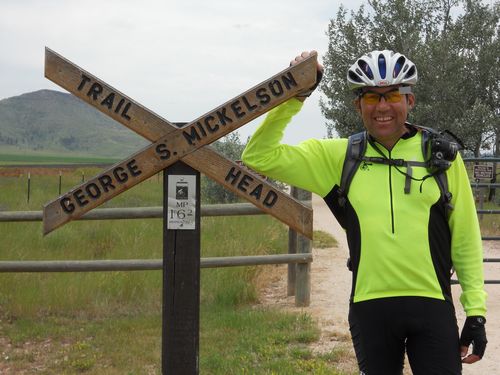 The storms that had been brewing in the distance were now near and we were caught in some  strong head and cross wind. It was tough going — but Leo just punched right through it as if it were dead calm! My hero!!!!

We had dinner in a BOWLING ALLEY tonight. That’s a first for me! They brought in the food and closed the lanes for three hours while we ate. We sat right where the bowlers do — at the end of the lanes. Took a little getting used to — but it was an experience not to be missed. In the picture below, the Geldings found an open lane. That’s Mark (Maryland), Joe, and Toronto Mark poking his out from behind Dave. 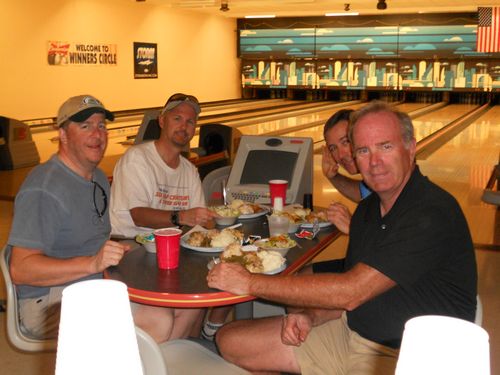 I’m icing my calf as I type this, and will stretch before I turn in tonight. Given how difficult tomorrow is — I will be taking it as easy as I can and just try to avoid having to sag. I’d really prefer that Scooter and I do this under our own power!  Other than this slight muscle strain and a few saddle sores/sit bones tenderness,  I feel great.

My parting shot today is of my hero, Leo — showing how much sun we’re getting out here. Can you guess where his helmet straps go? 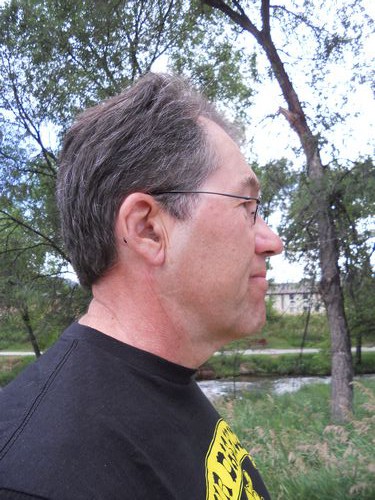