Tailwinds and agricultural scenery were the order of the day. I was nursing my left calf  muscle along so I rode along all day at a very conversational pace. My average heart rate was 93 bpm — with about 2,5oo’ of climbing. I hardly remember pushing the pedals at times. I was thankful for the favorable winds. This writeup would be totally different if I’d had to buck a head wind all day. I probably would have ended up in riding in one of the vans.

We crossed the halfway point at our first SAG today — that means we’ve riden about 1,800 miles. Who’d a thunk!? And, today is our 25th day which is also a halfway mark. In some ways it feels like we just left Oregon but then when I reflect on all of our experiences and places we’ve been I’m kinda surprised that it is ONLY 25 days! Heck we’ve seen Mt. Hood, Mt. Rushmore and Wall Drug — what could top that?

I was at the half way point when Michael (left) and Matt arrived. Michael made it across first and Matt took just a bit longer! This is the first day the tadem has been back on the road since before Mt. Rushmore. The rear wheel failed as they were climbing. Luckily they weren’t flying downhill when it happened! They were using “fancy performance” wheels that their local bike shop said would survive the trip. Wrong! I’m glad I left my similar wheels at home and brought the ones built by Peter White. I highly recommend his shop! I found them online and feel very fortunate to be riding on the wheels he built for me! No problems at all.  Now, back to the Louis boyz drama. When their rim failed — they were able to move to two “single” bikes. Gary (a.k.a. Scruffy) had to return to corporate life for a few days, so Michael was able to use his bike. And Matt tried out several bikes over the last three days. He said he felt a little like Goldy Locks — one was a little too big (Mike’s  custom bike) , the next a little too small  (Barb’s Trek) and the last one (Jeff’s custom bike) was JUST right! I know he was kinda hoping for a few more bikes to try…. 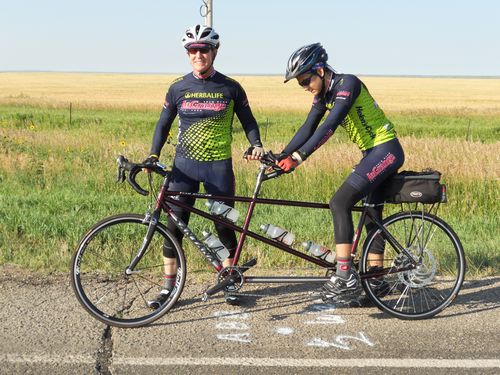 The rest stop had a couple of other “attractions” — an wheat field and a three -egged dog named Duke. Duke would have loved for us to stay and play all day long. I did toss his scrunched can a few times before I decided it was time to ride again! 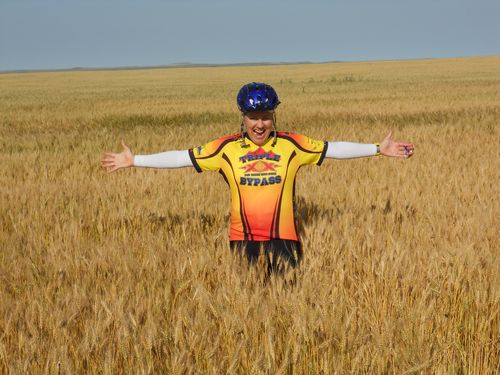 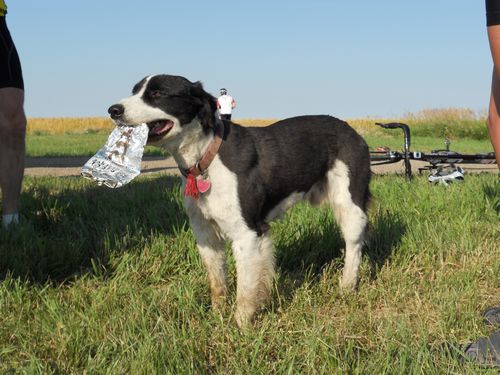 We rode along the Missouri River the entire day. That is one wide river! I could tell by the amount of debris along the banks that the river level has been higher recently. I could also see that it  is still above its “normal” level as several trees along the banks were partially under water.  Beautiful to see. 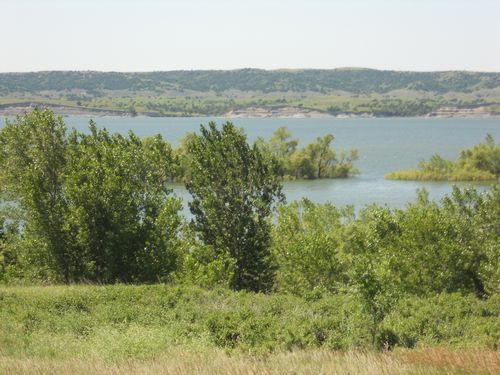 The route took us through a Lakota reservation too. It reminded me of communities Beth and I drove through when we left our friends Deb and Sherrill in Nebraska and headed out to the Blue Earth Fjord Horse Show one year. All the homes are small and look a little (or a lot) run down and the roads were in as poor a shape as we’ve seen the entire trip.  Pot holes galore and patches of pavement on top of other patches.  I found my mind wandering to the relationship between the two sovereign nations and the fact that it doesn’t seem to be working all that well. Wish I understood all the issues and the legal standing of all the parties involved. 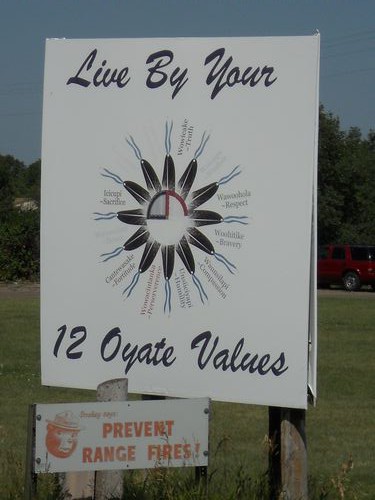 Ridng along,  there are always lots of skinny dogs around and often horses in small paddocks where otherwise there might be a front or side yard. Times definitely look tough here. But, as we passed some of the local folks there was always a smile and a friendly “Hi”. 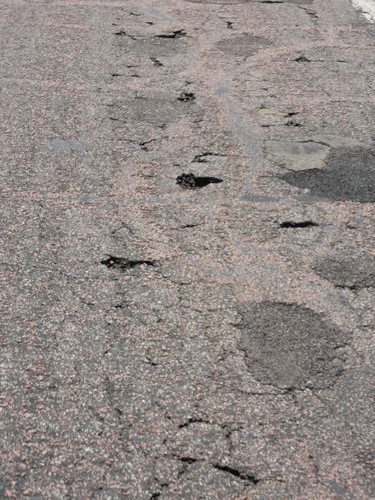 Another stretch of our ride was through the busiest electric grid I’ve ever seen! There were transmission lines EVERYWHERE! I pedaled just a little harder to minimize my stay under all those wires. Not a place where I’d want to own property! 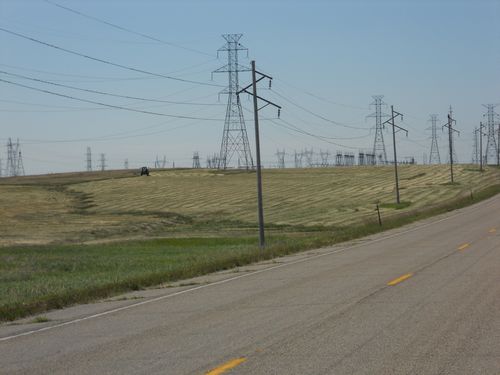 My parting shot today is of Leo and the big truck of bales that was driven by Duke’s “person.”n The SAG stop is visible right over Leo’s shoulder. As you can see, there are nothing fancy looking but each one has proven to be an oasis! You can also see the wide shoulders we’ve been riding on lately… add this to the incredibly wide lanes and small vehicles …. 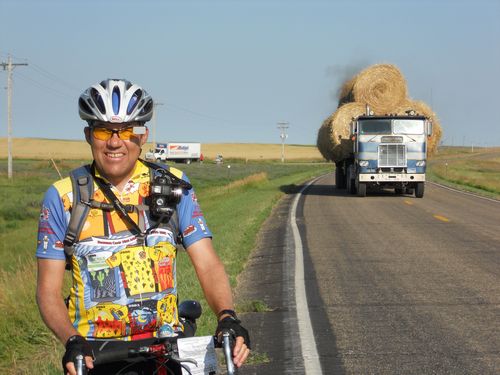