Anyone who is interested… I added pictures to yesterday’s entry. Go check it out (Jeanne….)

Our exiled group at the AmericInn got up early and had breakfast at the hotel so we could get on the road as quickly as possible. The folks from the other hotel ate at Perkins (right next to our hotel). Leo and Rod were in that group and probably got on the road about 30 minutes after Andrew and I did.  Generally when there is a “Continental” breakfast offered at the hotel, ABB also makes arrangements with a local restaurant for anyone who prefers a full hot meal. The Bad Pennies usually opt for the hot meal since it tends to fortify us better for a long day in the saddle. But, since AmericInn had one of those handy-dandy, make-it-yourself waffle irons, yogurt and hard boiled eggs (…gotta have some sort of protien) there was no reason to wait for a sit-down meal.

Minnesota’s roads seem to have a narrower riding shoulder than any of the states we’ve been in so far. And, unfortunately, Minnesota roads have deep cracks in the pavement that we’ve become familiar with over the last month. There are more than a few riders who’s bottoms would appreciate a smoother ride. I’m actually fairing pretty well now — but I was in that camp a while back too! A couple of weeks into the ride, I started wearing double shorts and apparently that has provided enough extra cushion in all the right spots because I’m not feeling the pain that others are complaining about. My dilema now is figuring out if, and when, I should go back to wearing a single pair of shorts! Today wasn’t worth the risk — with 102 miles to ride. Nor is tomorrow as the second day of back-to-back centuries. Hmmm, maybe I’ll go back to single shorts on August 10th! I know, “TMI.”

Today’s route was very nice — flat as a pancake and there were long straight stretches that must’ve gone 5-6 miles without even the slightest bend. Andrew and I rode by huge wind mills whose turbines turned slowly. We couldn’t help but watch them as we approached. I could’ve sat for hours just watching the blades turn round ‘n round. But — of course, we kept focused on our century ride. 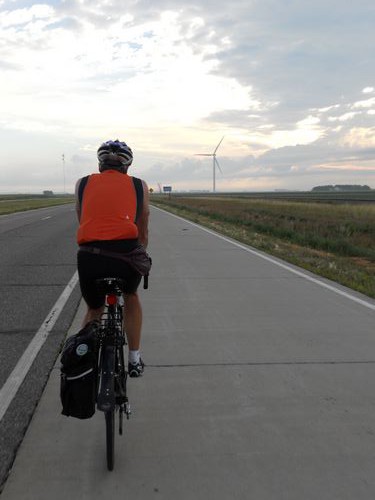 The midwest is definitely Cargill country. We passed at least one grain storage facilities  today. 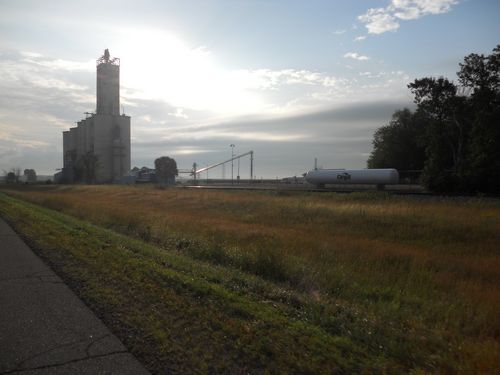 Yesterday we saw  an old grain elevator (I think that’s what it was…) that looked like it used to be a Cargill facility but is now run by someone else. 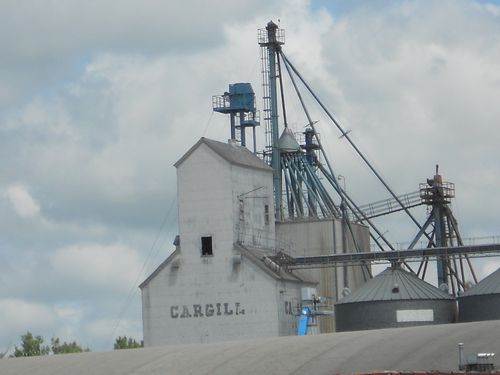 Mid morning I caught a glimpse of our shadow riders. I took one of Leo, one of myself and then one of all of us.  Here they are… 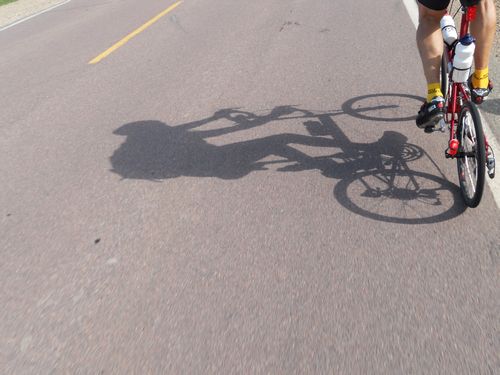 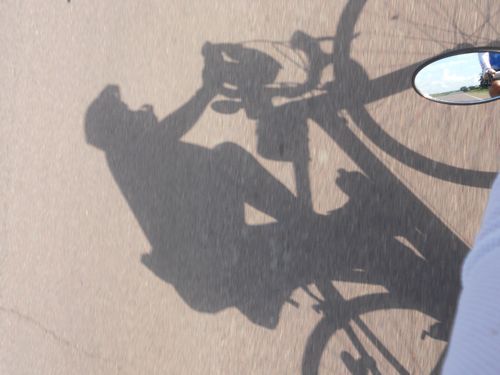 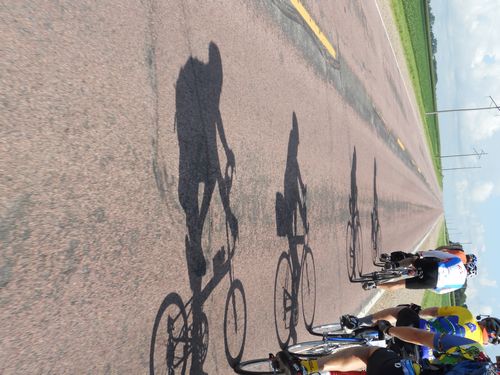 Leo has family visiting tonight – and they just stopped in so I’ve been visiting in stead of blogging — but that’s what this trip is all about, so y’all will have to wait until I have good internet again for me to finish this one….

I will quickly mention that I have a new personal best for 100 miles — 5:54 minutes. WAHOO! Tomorrow’s terrain is a bit more difficult so I think this record will stand for a while….maybe a loooong time!