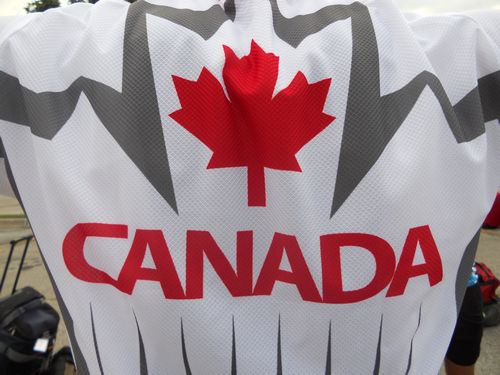 (This is Toronto Mark’s riding jersey…with him in it!)

Canada is beautiful. I wish they’d consider putting a shoulder on their roads – but other than that, it has been rather nice.

Yesterday when folks got into town they stopped at Reynolds bike shop and picked up some cool Canada cycling jerseys. We got them together this morning for a photo op. 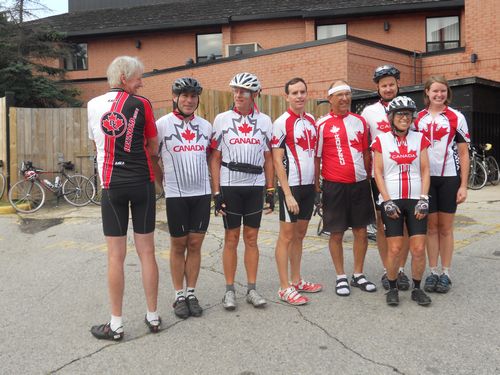 Alex was passing out the leftover Nanaimo bars at load. Talk about a sugar rush! Jeff’s Mom brought these along with a several dozen pecan tarts (they call them something else….) and we had them at yesterday’s SAG. Today, Toronto Mark’s wife, Susan, brought homemade chocolate biscotti. OMG — she makes a mean biscotti! After these special treats it is going to be hard to go back to the normal fare (which generally had been just fine for most of us). 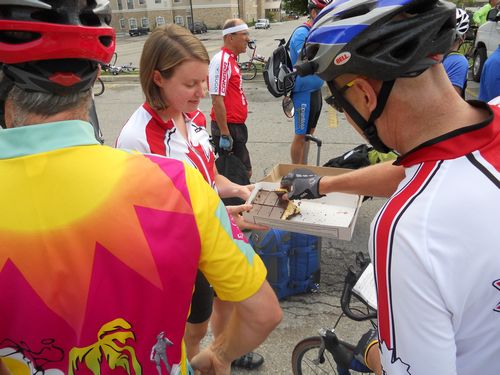 It was a cool, cloudy morning with a relatively light wind and judging by the puddles everywhere it had rained a couple hours before I got up. It was absolutely perfect riding temperature! I rode out with a couple of Bad Pennies (Leo & Andrew) as well as Carol & Mark (CA) and Katie (NYC) and Beth (Boulder). This same group — or parts of it — seem to be riding at about the same pace and we all get along quite well.

On the way out of the hotel,  I couldn’t help but notice the business that shared our parking lot. And yes, this is what you think it is. Leo and Andrew went over last night after dinner to talk with the staff  for about a half hour and to ask them about their business… 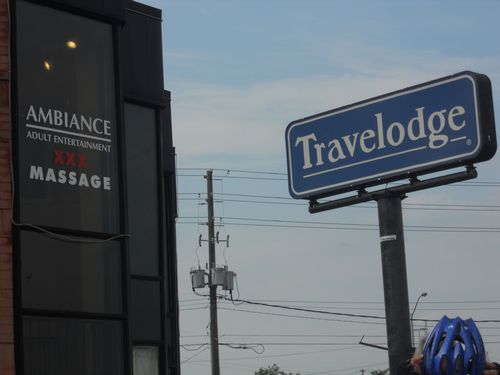 Once we got out into the country a bit, we started to see the same crops we did yesterday. More tobacco, corn and soy — but today we also saw green onions being harvested by hand and fields of cabbage.

Dereka said she read my blog yesterday and was surprised to see that I had worked on a tobacco farm in my youth. Small world that it is — she had too! Dereka worked in Deerfield, Massachusetts for M&M but we compared stories and our experiences were almost identical — excpet her starting wages were 50 cents an hour and I made $1.34 / hour (10 years later). It was fun reliving those memories with her! 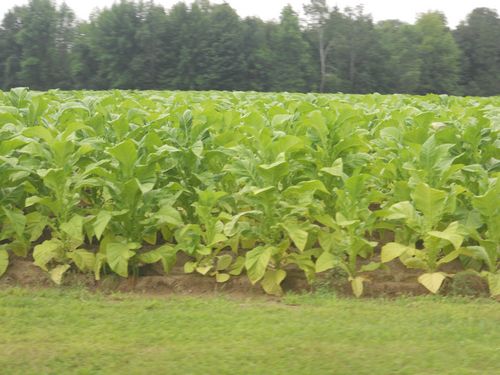 Swapping stories made the miles fly by today. We did miss one turn today, but caught ourselves a couple hundred feet later, turned around and got back on course without any problem.  We were not the only ones who missed the turn though. We knew that at least three other riders were up ahead of us and getting farther off course with every pedal stroke. I tried to call Mike (staff) but the call would not complete. Beth’s phone finally did and she left a message for Mike to go chase these guys down. Later we found out that my caller ID did make it through to Mike’s phone, even though my call would not complete and he looked me up in their phone “database” — knew he had recently seen us and came back to our location. Once there, we told him who we thought might be heading in the wrong direction.  This doesn’t happen very often — but when it does, it is a bit of an art to track down the wayward riders. The more time that passes, the farther their “random walk” goes.

Today we saw the cutest donkey– don’t you agree? 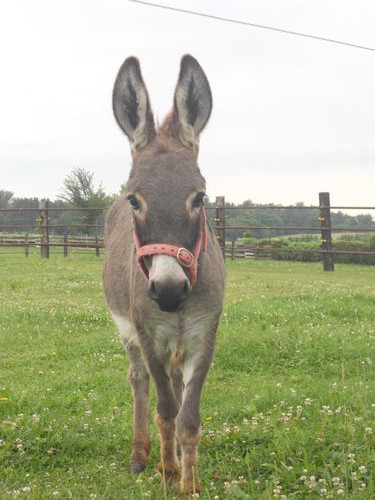 Shortly after visiting with the donkey it started to drizzle…and then rain. It never poured, but we did ride in a steady rain for about 20-30 minutes. Long enough to get pretty wet. It was warm enough that we didn’t stop to put on jackets or anything. We just rode through it. By the time we got to Brantford it had stopped. Good thing — riding in town was pretty crazy as it was and it would have been even more difficult if we had rain to deal with too. Someone had dumped a load of wheat on the bridge into town and it was “slicker than deer gut on a door knob.” Dave (Michigan) was one of the first riders to get to that point and he slipped and slid as soon as his wheels came in contact with the stuff (which looked more like sawdust or sand). As he was trying to regain control of his bike, he feared he was going to go over the side rail and ended up laying the bike down. Word was sent back to the rest of us to WATCH OUT! (We did as did everyone else)

Brantford is an interesting town — looks like it is trying to make a come back. We passed an entire section of town that is in the middle of being demolished. Right down the road, there is a wonderful plaza with fountains, sitting areas, chess boards and shops. We stopped and had a nice sandwich and salad at the Coffee Culture. 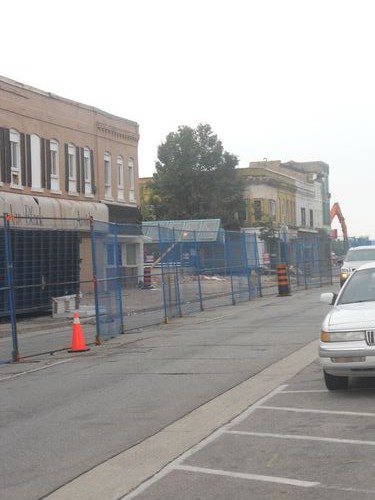 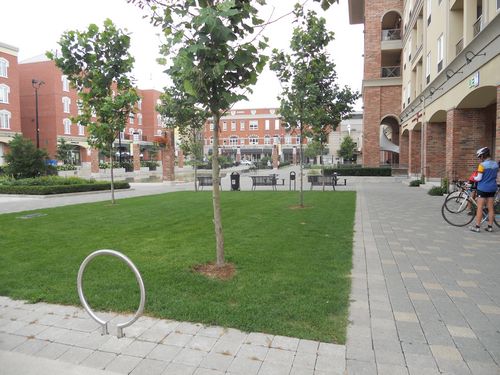