The sun had barely crossed the horizon as we packed and got ready for another long day of climbing. Beth and I made oatmeal in our hotel room and got on the road as soon as the luggage was loaded. Everyone else went into town for a quick breakfast – some to McDonalds and other’s to a local “Egg & I”.

As Beth and I rode to the entrance to the Rocky Mountain National Park, we saw a group of elk  eating their breakfast just a stone’s throw off the road (all of  them had huge racks). And we saw two bunny rabbits crossing from left to right and just a bit farther a fox going from right to left.  Definitely going the wrong way, as breakfast had just gone the other way. 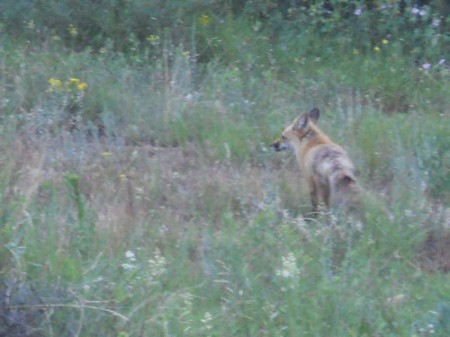 At RAP last night there was a rather lengthy discussion on the best way to get everyone into the park using 4 or 5 Annual and Senior park passes. Four riders could get in on one pass. Turned out, we got up to the entrance and fee station so early that there was no one in the booth to check the passes or collect any money anyway! Too funny.

It was shaping up to be another fantastic day. At 47 degrees, it was a chilly start but within 15-20 minutes the climbing began and didn’t stop until you got to the summit at just over 12,000′.  I didn’t hear anyone complain that it was too cool. I think it actually kept riders from overheating. 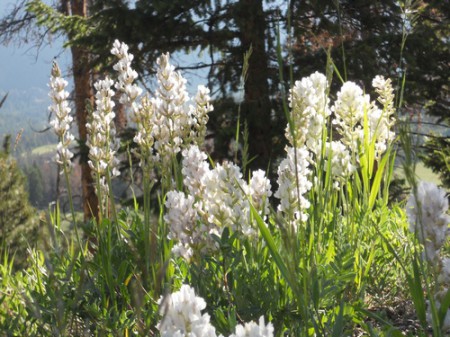 Tom and Barb on their way to the first SAG. 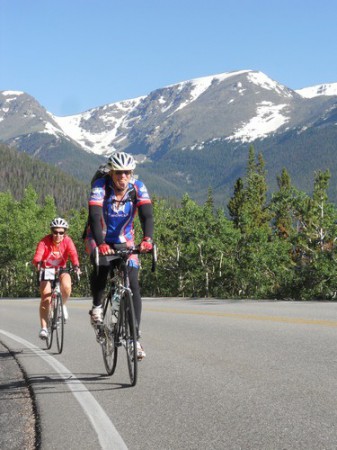 John was right behind them. He has had this smile plastered on his face since the first pedal stroke of the tour. I’m afraid his smile muscles might get strained by the end of this thing! 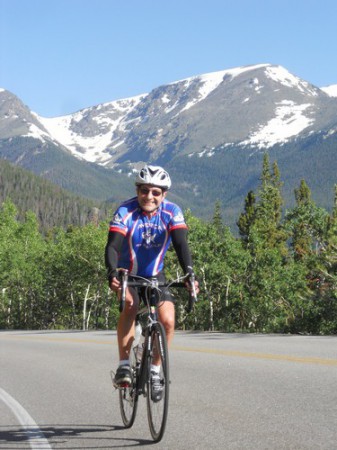 Our first rest stop was a welcome sight. Some local cyclists even stopped and took advantage of our water and snacks. There are no services to speak of in the park so cyclists have to carry enough water and food to last until the turn around or exit the park on the west side and then Grand Lake has lots to offer.

I stopped at the SAG and visited with riders, took a short walk into the woods… and then started off again towards the summit. That’s when my day took a big ‘U’ turn. As I pedaled away Scooter suddenly stopped. He didn’t slow to a stop, he grinded to an immediate halt. So quickly that I had no warning. I didn’t even get a chance to think about unclipping my shoes.  Forward progress stopped and over I went. I landed softly enough and very confused. Why had Scooter done that? It only took a moment and a quick glance down at my rear wheel and derailleur to understand why. Scooter’s derailleur hanger had totally snapped off!!! And to compound the problem, when it happened, the derailleur got pulled into the rear wheel and was jammed solidly in the spokes.  The thought that ran through my mind was -“Well, looks like I’m about to join the SAG team, my tour has just come to an end.” 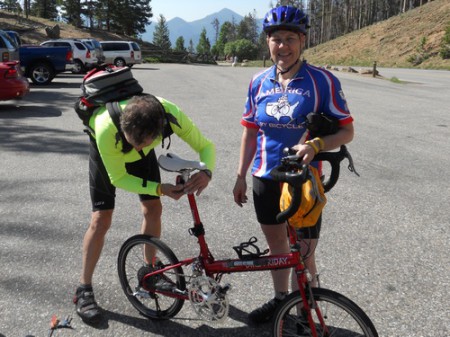 I carried Scooter back the 50 or so yards back to the SAG. Leo and David were still there and had shocked looks on their faces. Scooter and I must’ve been quite the sight — someone carrying a bike back to the SAG, what’s that all about? Well, look for yourself. No way Scooter was going to return under his own power. Poor Scooter. 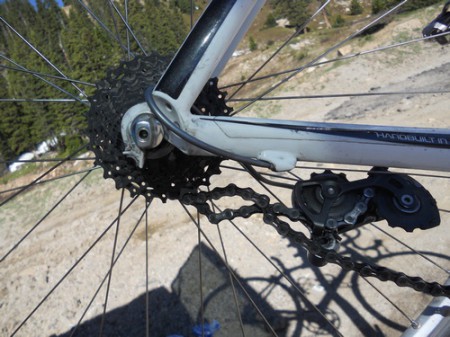 I had already resigned myself to the fact that I no longer had a bicycle to ride. David on the other hand was thinking about Sue’s Bike Friday that was still packed in the SAG van. Sue was open to the idea of me riding her bike – a very generous gesture indeed — so our tour mechanics, Leo and David, went about taking Scooter’s pedal, seat, bike bag and mirror off and transferring them to Sue’s Bike Friday.  Within 20 minutes I was off again.

Sue is taller than me by several inches and her bike is set up so that she sits relatively upright. So, I found myself sitting very upright and discovered quite quickly that it requires different muscles to pedal in that position. When one is upright you don’t engage your gluts and lower back muscles as much. I found myself using more of my quads than normal.  I remember chuckling to myself as I spun up the climb, that Trail Ridge road on the Fourth of July weekend it probably not the best time to be test-riding a new bike! One with itsy, bitsy wheels to boot. Actually, I did fine and was just happy to be able to continue riding.

A group of us stopped at what I call the ‘snow wall’ which is at the top of the exposed climb. This wall is here every year. This year is was taller than I can ever remember. Leo and David slide down the slope across from the wall and Leo took advantage of the abundant snow to make a snow angel. Apparently, they don’t have snow in July in Austin, Texas. 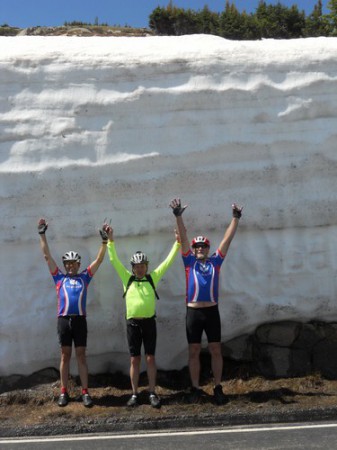 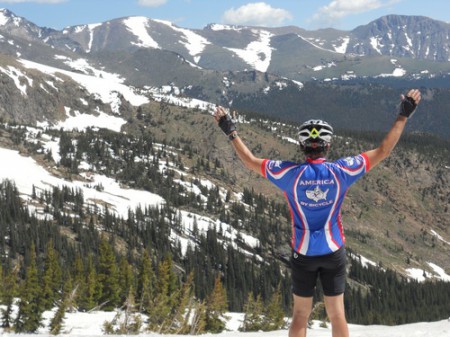 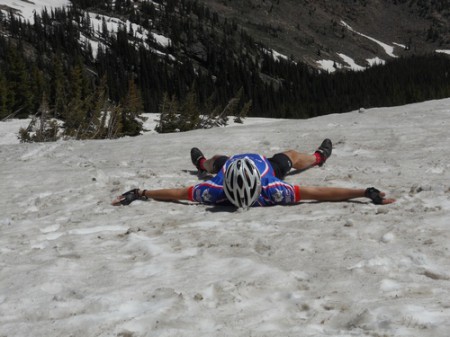 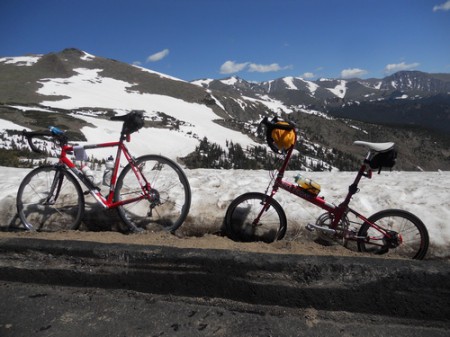 While we were at the snow wall, a ranger’s jeep drove up and parked near us. The ranger got out and struck up a conversation with Leo and David. At some point, he pulled a spiral notepad out of his shirt pocket, flipped thru a few pages, looked at each of us in the group and asked, “Are any of you Beth Laber or Sandy North?”  Needless to say,  it took me by surprise that this ranger was on the lookout for me. My first thought was that they were chasing us down because we entered the park without paying. But, how did he know my name!?  As this was all bouncing around my brain,  he went on to ask about our group. What kind of an organization were we? Did we know that organized rides were required to get a permit to ride through the park? Was this a for-profit ride? (Not!)  I reassured him that we were just a group of friends who were riding together. He kept probing and I kept answering. I turns out that because we were all riding in our America By Bicycle jerseys he logically assumed we must be some sort of organized ride. It didn’t help that Beth and I forgot to tell our SAG drivers that we should keep a low profile in the park so they had setup their gourmet SAG table, complete with folding chair and traffic cones. That certainly would indicate some sort of organization, wouldn’t it? Apparently Ranger Andrew had stopped by Nancy’s truck at the visitor center and asked her the same questions. Our answers must have been consistent because he didn’t handcuff me and drag me (and Bike Friday) away. He allowed us to continue on 0ur way after he verified my phone number and said that he’d get back with me if I needed to get that permit. 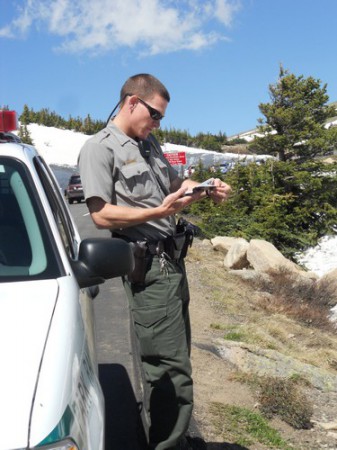 About this time, Beth and Don caught up with us. The climbing had taken its toll on Don and he was ready for a lift to the top. He and I rode along to the next pull-out area while a family from Missouri took a message for us to Nancy and Karen at the visitor’s center. It got rather chilly as we waited. I hadn’t noticed the breeze or the cool air while I was riding, but once we stopped and stood for about 15 minutes, it got downright nippy. Karen arrived to rescue Don. I had planned to put Bike Friday on the rack as well.  The Bike Friday is not built like other bikes and it does not fit on standard trunk style bike racks. So, after loading Don up and waving good-bye to them, I started off on my own. I was sure I was the only one still on this side of the pass.  I was almost to the summit when Sue came back for me. Someone had sent her back for me – but since she was here and, by now, it was getting rather late I decided to load Bike Friday back in the van and take a ride. It was close to 1pm by this time! 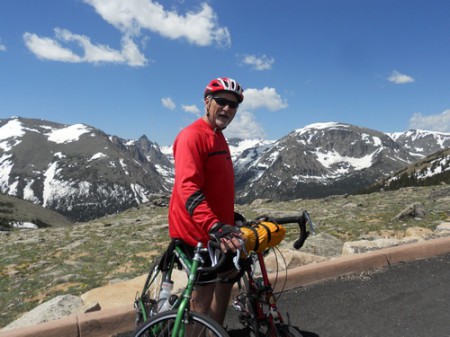 The descent out the west side of the park is awesome. I didn’t get to experience it today though. I’ve done it on two previous organized rides and decided that it was probably not a good idea to ride someone elses bike down the screaming descent. So,  I left Sue’s bike in the van and hitched a ride in Nancy’s truck all the way to the hotel. For any of you who know me, know that taking a SAG is not something I would normally even consider. But, today was a bit extrordinary. Poor Scooter.

Nancy and Sue at the vistor’s center — kinda chilly up there, eh? 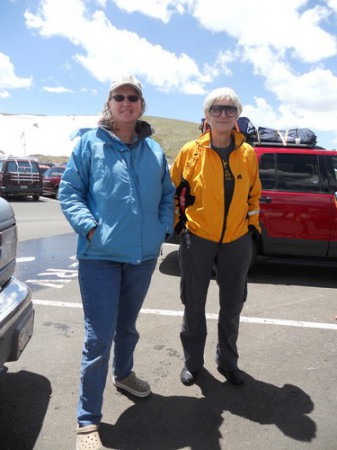 Those that did ride, loved the downhill portion. They were less keen on the 16 miles after that though. As is almost always the case, there was a stiff breeze off Grand Lake which translated into a headwind for the riders. That 16 mile stretch tends to be hot, windy and the road carries quite a bit of car traffic. For our group, you add to that the fact that this was only their second day riding at altitude and yesterday they had a monster day of climbing. The result was a group of tired cyclists slowly making their way to Granby. Luckily, there were a few scenic spots  to distract them. One marshy area had a cow moose. All along the way, the riders could marvel at the river, the water was everywhere. You could hardly tell where the river banks were supposed to be. I’ve never seen it this way before, that’s for sure!

Everyone got in safely. Poor Joe and Karen had to wait an eternity to get their room. We held RAP and then everyone went their own way for dinner. Later than evening, there was a big fireworks display at the rodeo. We had front row seats since the rodeo was taking place right behind our hotel!

I’m sure everyone turned in early and slept like logs.  I’ll bet most of them still had smiles on their faces too.