OK, I was wrong. It can get even better! Clear bright skies, cool crisp mountain air and a slight tailwind. Unfortunately it is too late to fill you in on all the details. Being on the staff really has cut into my blogging time. But, after we get into Copper Mountain tomorrow we have a rest day. So check back because my plan is to catch everyone up on the first half of the tour. Complete with a few photos!

Keep the rubber side down…and the wheels going around!

The group started the day with a buffet breakfast at the hotel. It was a nice affair of eggs, bacon, oatmeal, biscuits & gravy, pastries and fruit. Normally, everyone is on their own for meals but we arranged the buffet because there weren’t many options near our hotel. I think everyone appreciated the meal — they all left clean plates!

Joe was one of the last ones out after breakfast – and my money was on him finishing at the front of the pack. Here’s Joe and Karen – he’s in his “Hat City” jersey that he got from Jeff D on the ABB ride. 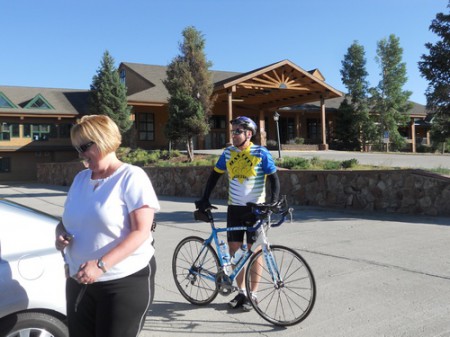 I can’t comment much on the ride as I rode up to the top of Berthoud Pass with Nancy and Karen. We set up the SAG and visited until riders started to show up. It was a dangerous job. When we pulled out the unopened bag of dried fruit it almost blew up in my face! 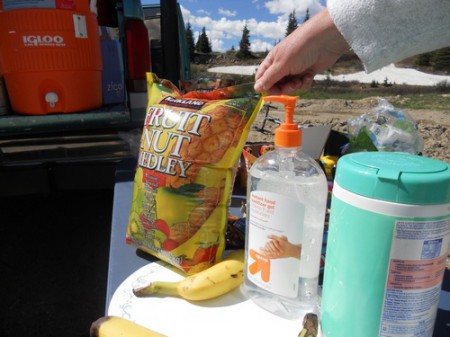 I was also waiting for my Beth who was driving up with my backup road bike. It’s a good thing I kept it when Scooter joined the family.  Beth arrived with my Giant OCR1 and three whippets – our two (Finn and Fergus) and Nancy’s boy, Leo. 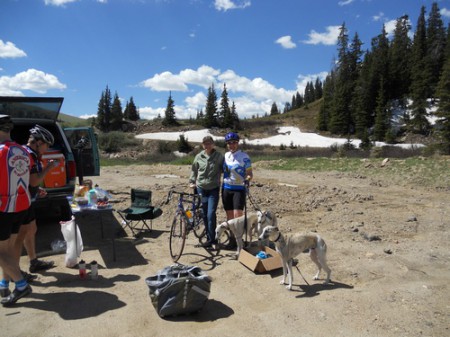 Everyone was happy to see each other especially since we hadn’t planned to do so for another week! Beth didn’t stay long. She headed home at the same time I pushed off for the long descent to Empire.  I wasn’t sure if anyone else would stop to take photos — so I stopped and took a few myself. Here they are… 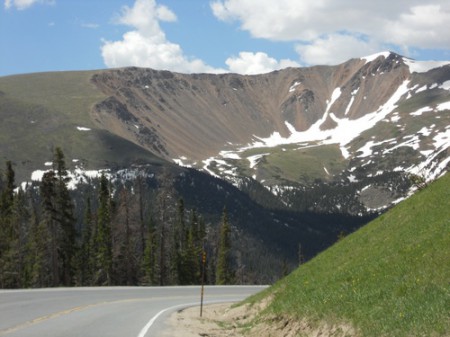 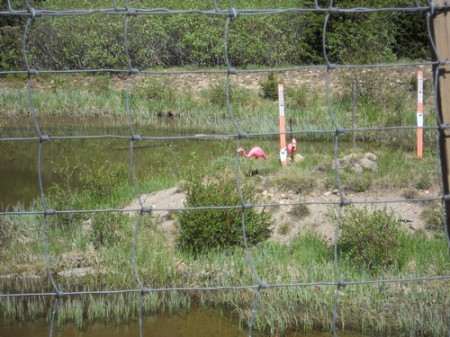 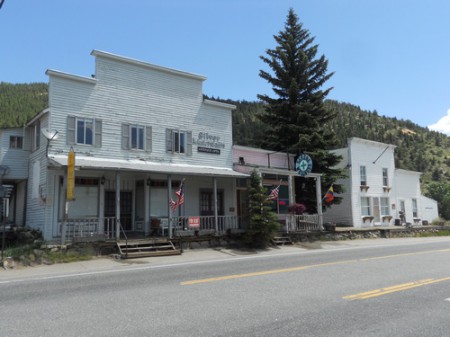 Water is a precious comodity here in Colorado…. here’s a local sharing a little with the hanging plants. 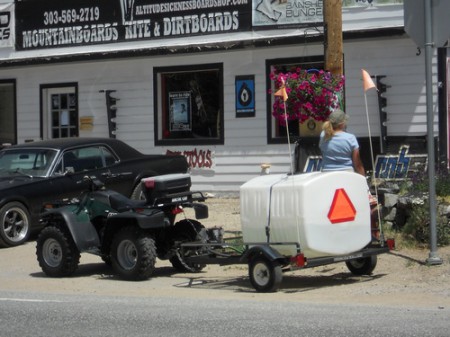 A few riders were concerned that they wouldn’t  be able to see the turn before I-70 so I decided I would ride down to the intersection and make sure everyone turned at the appropriate time. Poor planning on my part though. Most of the riders took our advice and stopped in Empire for lunch – that meant my vigil lasted about 3 hours. I stood in the shade of a highway sign. It got a little tricky towards noon when the shadow got pencil thin. 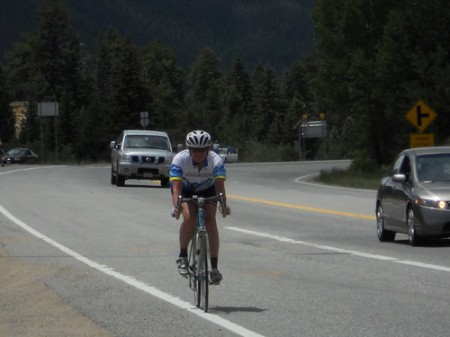 I was relieved by Sue when she came down the hill. Thanks Sue! Beth was right behind her so she and I rode into Georgetown together. The frontage road that used to be dirt was freshly paved and as smooth as a baby’s behind. Very nice riding.

I was feeling great when we got to the hotel. But, then again, most of my miles were downhill — and I didn’t have to ride the 16 miles from Grand Lake to Grandby yesterday (with the heat and the headwind). Tomorrow is likely to be a different story. My Giant OCR1 is quite a bit heavier than Scooter so I’ll be working pretty hard. The gearing is lower though — I have a 26 on the front and a 34 on the back. I can honestly say that with this gearing, I can ride up a phone pole!

When we got to our hotel, the Georgetown Super 8, we had to deal with a few room assignment issues. The guy at the desk was not the brightest  bulb on the tree and after I sent Beth to her room he and I spent the next 45 minutes together sorting things out.  On top of all this — there was a water main  break in town  and we were told not to drink any of the water! OK, we’re cyclists…and we stress hydrating.  Anyway, in the end, everyone had a room, with their expected roommate.  Before I could squeeze in a shower, Beth, Nancy and I headed out to get fresh water in the three large orange jugs.  Beth and Nancy found lattes at Starbucks, and we found water at Walmart (there garden hose!). We also marked a couple of the turns for tomorrow’s ride. We got back a few minutes late — everyone was waiting for RAP in the courtyard. We had left Randy in c harge and I could tell he was glad we got back when we did. This group can be a tough crowd!

Even though we are all on our own for dinner, we seem to end up at the same places. Tonight it was an awesome pizza place that Randy, Sara and I frequent when we do training rides up in Summit county.  A few folks wandered off to th saloon after dinner, but most of us turned in pretty early.