On Thursday, I had three hours left to decide. To ride the Boulder Roubaix, or pass on it. This was not as cut and dry as one would think. The race was like nothing I had done before. The course is just shy of 19 miles, with 53% dirt, 47% pavement. The same doubts about my ability to compete with the other entrants ran around the back of my mind. In the end, I signed up. Then, on Friday morning I drove part of the route on my way to work. The course is only about 5 miles out of my way – it did take quite a bit longer to drive it though since it was dirt and it meandered thru rural Boulder County. Seeing the route did nothing to squelch my concerns. In addition to it being dirt — there were lots of sharp (90 degree) turns and some short, but seriously steep climbs.  I couldn’t wait to see the rest of the route on my commute home!

I never did get to test-ride the course. I actually felt fortunate to have driven most of it before the race. When I drove home Friday night, the volunteers were out setting up the start/finish area and putting up signage along the route. It looked like it was gonna be a grand time! There were close to 650 racers according to the on-line registration site. There were only 5 women in my category (SW55+).

After feeding the ponies, I gathered up all my stuff (including my new cyclo-ops trainer) and headed out. With an hour and a half before our start, I pulled in and rode my bike over to registration. There was no line! I was all signed in within a few minutes. I set up the trainer and got Pogo situated so I could warm up without getting run over by all the cars, bikes and pedestrians heading up and down towards the registration area.

My warm-up went well. I did get on and off a few times — just like at the Frostbite TT — as I’d remember something that I needed to take care of.  Pin my number onto my jersey, get my water bottle ready, pick out which gloves I would wear, put on my shoe covers etc. One of these days, I’ll have it down to a routine and my warm-up won’t get interrupted!).

With about 15 minutes to go, I put everything away and rode over to the start area again. I hooked up with the other gals in the SW55+ group. There were five of us — Sue, Susan, Debbie, Maurine and me. All the other gals were seasoned racers. By reputation, Sue was the one to be feared. Last year she won just about everything there was to win! And, the year before wasn’t that much different. They all looked rather intimidating.

We waited around listening for our group to be called to the start line. Our published start time came and went, as did that of the SM65+ who were supposed to take off a couple of minutes before us. Finally, we got the attention of the official starter — clearly they had screwed up and were not happy to see that we weren’t already on our way. The men’s pro group was due to start shortly. Now, it was highly likely that we would still be out on the course when they were racing. That was NOT in the plans. Oh well, the hustled us to the line and due to the time crunch ran the SM65+ and the SW55+ groups together. This was actually a HUGE advantage for my group because now there would be 25 riders in our group instead of 5. Working with the men would save us a ton of energy and raise the pace of our race considerably.

That proved to be true. I knew to be patient. I kept an eye on Sue and Susan as they appeared to be staying right up with the men.  My plan was to just sit in the pack and try not to get dropped. I was nervous about any inclines. Knowing that I out-weigh all the other gals, any sort of climb could be a problem for me. My plan for that was to attack the climbs as much as possible — knowing that it was going to hurt like hell. The first short climb didn’t bother me, but it proved too much for Maurine and Debbie. Both were dropped off the back and left to fend for themselves. Not an enviable position. Sue, Susan and I hung with the guys. The pace was at the top end of my ability. Luckily, Susan didn’t seem to comfortable with it either. Sue, on the other hand, seemed to be struggling less than we were. I made a mental note of that. The first dirt section was over before I knew it. When we hit the pavement, the pace got even faster. I stayed tucked in and tried to catch my breath a take a sip from my water bottle (just not possible on the dirt sections!). We all seemed to stay together regardless of the terrain. There was one small attack from one of the guys, but the group quickly responded and he was caught almost immediately.  Susan sounded like she was about ready to blowup. Deep, gulping, raspy breaths. She kept going though. It got so that I didn’t need to look around to see if she was still with the group — I could hear her literally breathing down my neck!

About 4-5 miles from the finish, the race turned onto (paved) Nelson Rd and went west. This is a difficult uphill stretch. Whenever I’ve ridden it as part of other training rides I struggle to get up it with any speed. Today was no different. Everyone struggled — but I struggled a bit more than Sue did. She started on my wheel, but quickly jumped around and created a significant gap when she realized I was having difficulty. I knew this was the turning point in my race. Susan was in even more trouble than I was, as were a few of the guys. By the time I finished the climb and turned onto the dirt road, Sue and the lead guys were probably 30-45 seconds ahead of me. And, now I was on my own, heading south into a headwind and the hilliest section of the race. All I could do was tell myself that the group behind me was in a similar state — and that if i was hurting…they were probably hurting just as much, or more!

I pushed myself as hard as I could — much harder to do this riding solo than in a group. I looked back a couple of times and didn’t see anyone within striking distance. I labored up the hills. The men’s pro group caught me on one of the longer stretches of climbing. I pulled way to the left of the road as they flew by me like I was parked instead of pedaling. I watched them for a while as they overtook Sue and her group on up ahead of me. Shortly after that, Sue’s group was also out of sight. The last mile or so seemed to take forever.  A little voice kept telling me to push so I didn’t get surprised at the last minute. I listened to that voice and pushed all the way through the finish line to take second place.

It was only much later, when we took the podium, that I learned that Maurine had ridden herself back into contention and overtaken Susan right at the finish line for third place.  Debbie came in a distant 5th, about 5 minutes later.

What a blast. I was spent, but it felt so good to ride hard and do well. I know what I have to work on to get better and I think, with time, I will see improvement. But for now, I’ll savor my moment on the podium! 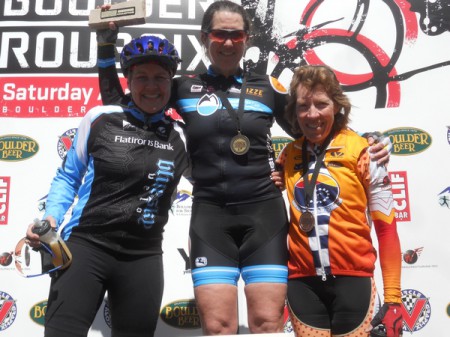 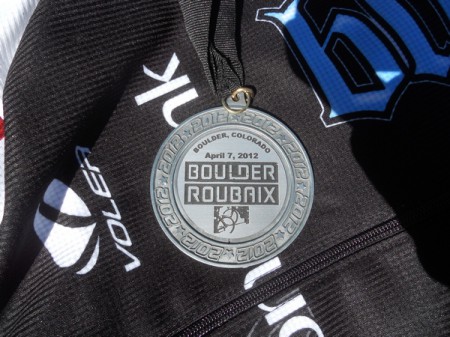