Was a cold morning! I was up at 5:30am and out the door by 6:00am.  I was a popsicle while warming up – had my heavy winter gloves on as well as long tights and 2.5 layers up top. Of course, I had my shoe covers on (as it is not 80F yet). When I registered, I was relieved and disappointed to find out that I was the only one racing in SW55+ today. Guess all the other F.O.G.s were scared off (or knew it was going to be freezing at 8am!). Going into today’s race I was really wondering who would show up since there were eight SW55+ racers yesterday at the Cafe Velo TT. Well, I got my answer, and a victory!
My challenge now was to make it a race – even though I was guaranteed the top step of the podium as long as I finished the race! It was actually not hard to get psyched up for the race — there were plenty of SW4 women who I could turn into rabbits for my purposes. I wish is weren’t true, but I also knew that there was no way that I could be competitive in that group. A successful day for me was going to be measured by picking off a rabbit or two and not finishing dead last.
Initially, the official was going to have me start 30 seconds after the SW4, but at the last minute, when he realized that I was riding solo,  helet me ride with the SW4s – which was nice. As we rolled out, I firmed up my goals – I added in a time goal and decided my goals would be to finish 1) under 1 hr and 2) ahead of at least one SW4 rider. As I mentioned, the main SW4 pack was clearly too fast for me. On the first lap, we were being chased by Juniors – oh boy, oh boy. Gotta watch yourself around those guys, more muscles than brains, I’m afraid.
The course was in great shape – considering the weather we had less than 5 days ago. Here’s a shot that the organizers took that shows “the hill” across a few days. Very telling!

The road had been graded since I rode it last weekend. Although this did fill in many of the pot holes, it also resulted in a lot of very loose gravel and some big and sharp stones being exposed. Apparently, some unlucky racers found the sharp ones as there were already a couple of flats before we even got to the first climb! That surprised me. Thankfully, I switched to brand-new 25c tires last night, so I was pretty sure I’d be able to avoid a flat if I stayed alert. I stayed relaxed and let my bike move under me as it found the best path through the loose gravel. I noticed a few of the other women were gripping their bars very tightly and as a result having a difficult time with the dirt section.
I had a nice gap ahead of me (maybe 30-40 yards) when I approached the hill so was able to take the left lane without fighting for it. In the back of my mind I couldn’t help thinking that this was only the first ascent of three.  I was making better time than the gal in the right track. But, even so, I got passed by a junior about half way up the climb and almost cut off by one who “hopped” over from the right track to the left track about half way up the hill. Picture that, will you — you see those tracks. They are NOT very wide. I held my line and kudos to the young racer who passed me as he went by me cleanly and without contact. I can’t say I held back as I climbed, but neither did I “burn any matches” to get up more quickly. I made good time up the hill and passed a couple SW4s on the way up and over the top. I continued to push until I got to the pavement where I let up a little and took the wheel of a SW4 down the hill. At the bottom of the hill, the course makes a 90 degree right-hand turn and heads up a 4% grade for another quarter mile or so. I felt comfortable on the climb back around to the start and then off again for lap two. My power was down a little on the second lap — maybe I went a bit too hard on the first one. I didn’t force it as I knew I had a third lap to go and I just rode within myself and kept the SW4 riders in sight (by this time 4-5 of them were behind me). I again had a clear shot at the hill and went up it fairly easily (relatively speaking). I powered over the top again and through  the remainder of the dirt section and then took an aero-position on the descent. I notice that I can often go faster if I do that than if I pedal and am sitting a bit more upright. So, I decided to save watts and “coast” down. The four SW4 riders caught me on the backstretch and we rode together into the last lap. There was one SW4 about 100 yards or so in front of us at the start of the third and final lap. She became my ‘mark’. On the very first incline just outside of town (Superior), I pulled away from three of the four gals I was riding with and kept my focus forward and intent on keeping pressure on the pedals. Slowly the gal who was in front of me got bigger – and she started up the hill at least 10 seconds ahead of me. She took the right lane on both the 2nd and 3rd laps — which I found AMAZING! I stayed to the left and came even with her about 3/4 of the way up the hill. I rode steady and pulled away form her as we crested the climb. I was now the lead rider of our little race within a race. To make sure she didn’t come back and pass me again, I dug deeper over the top and continued to push all the way to the paved section. On a glance back  she looked pretty small, so I’d say I had 200+ yards on her.  I recovered slightly on the downhill and then pushed again as  I made the turn and was heading up the last hill. I checked behind me a few times but I was pretty sure given my level of exertion and the distance between us that I was going to be first to the line.
I was up, out of the saddle after the last turn and powered my way to the finish. I probably started a little too early as my sprint faded but I still finished strong and under 56 minutes …by a mere two ticks… with 4-5 SW4s behind me ! 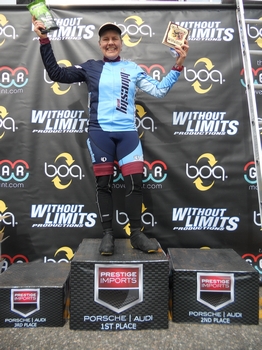