The fact that I am adding this blog entry tells you that I survived….

You would think that there would be a lot to say about a 2-day, 240 mile ride that includes 20,000 feet of elevation gain. But, in reality, there is not much to report. Unlike a race, there is very little strategy involved.  It boils down to ‘low and slow’ — keep the intensity low and the pace slow. That is the best way to make sure you finish and that’s just what I did.

I rode with some members of my Blue Sky Velo bike club and a few friends, Leo and David Anderson,  who I invited along from out of state. We were also joined by Jim Downey – a friend of one of our ABB riders from 2010. I just love the connections that I make through cycling….

We rode two long days. Up and on the bikes by 5:30am each morning. Each day we were out there for just under 12 hours. Unfortunately, the ‘low and slow’ approach results in more saddle time! It was great that my pace aligned with that of Leo and David’s so we all rode together both days. We had all ridden the east to west one-day Triple Bypass before and this was the first attempt at the Double for each of us.

When we set out up the first climb the thought of 240…239….238… miles more was a bit daunting. After a while though, the miles just clicked by and we found ourselves in a very comfortable rhythm. I chatted with other riders as I rode along. Interestingly, I was never out of breath at all. Heck, I don’t even remember breathing hard except for a very few steep sections of climbing. At the bottom of each climb our club had a SAG vehicle which was nice. Jeff Linroth or Donna Hamilton were there to greet us and give us encouragement and aid. Luckily we didn’t need the aid, but seeing their smiling faces and knowing that they were there to rescue us in case we needed it gave me great peace of mind.

It looked like we might be able to complete the day without getting rained on…that was until we saw the dark clouds over Copper Mountain as we rode up the bike path from Dillon. And, about a half mile from a convenience store it started to rain. We stopped, suited up and then continued on to the store. We weren’t there 2 minutes before the skies opened up and it POURED! It dumped for at least 15 minutes — we watched from our vantage spot inside the store. Once the rain lightened up we continued on. It rained on us half way up Vail Pass and then it quit. We rode the rest of the way to Avon in cloudy but dry conditions. After a nice meal provided by the Triple Bypass organizers, we rode to our hotel (our bags were shuttled by the Blue Sky Velo support team) and turned in early. I had David, Leo and Jim in my room — it was a bit crowded to say the least, but we managed.

It was a short night as we were back up at 4am and shuttling bikes and riders back to the start at 5am. Jim Jennings was the only other Blue Sky Velo rider to start the second day with me. Brad Erdner wasn’t feeling well on day #1 and decided not to continue when he woke up feeling just as bad. Dave Niss and Juanita McLaughlin had a tough time getting through the first day and had no intention to go back out again for more suffering. So, it was my foursome and Jim Jennings back out there for the return trip.

As I was riding to Avon on the first day, I was imagining the return trip and figured that it would be more the more difficult of the two directions. Our return started with a climb up the steeper, longer side of Vail Pass. I had ridden this 30+ years ago on a mountain bike, but my memory was very vague. My approach on the second day was the same as it was on day one… ‘low and slow’. I motored on up the pass without any difficulty at all. I chatted with more folks and enjoyed the sights and sounds of early morning mountain life. I could hear streams off in the distance and I was treated to several marmot sightings! Once up to the top, we took a very short break and headed down to Dillon. This was a fun and fast descent. I kept my eyes on the sky though as I knew that the rain clouds would be building again today. We took a nice break to prepare for the climb up the back side of Loveland Pass. This side is twice as long as the front side and has some steeper sections. I suspected this would be the most challenging climb of the day. And, it was a long, tough climb — but the ‘low and slow’ pace made it very tolerable, even enjoyable. My heart rate stayed in the 120s and I was never huffing and puffing. About this time, I did notice that I stood up to pedal more frequently as my butt was starting to get tired of being on the saddle! As Leo and I got to the top of the pass we were pelted with light hail and sleet. David joined us a few minutes later and after we put on our rain gear we headed down towards the I-70 corridor. It poured on us all the way down. My rain gear kept my core dry — I had on long fingered gloves, but they were not water proof. As a result, my hands/fingers got soaked and were freezing cold by the time I got to the bottom. Then we had a 30 mile gradual downhill to Idaho Springs. We flew at about 20 mph, but that was slow enough to allow my hands to thaw. It also stopped raining early in this stretch so they were also able to dry out a little.

At Idaho Springs we stopped and refueled again.  Although I ate constantly all weekend, I noticed that I was hungry at this rest stop. I doubled up on the snacks and took a couple packages of oreo cookies in my jersey pocket to eat later as I climbed.  This was our last climb of the day — I could see the barn! I still felt fine – the only ache or pain I had was a little tightness in my right shoulder blade. My legs and back were still pretty fresh… this after 210 miles of riding!

The rain returned shortly after we started out. It was a light but steady rain. Since we were climbing, the rain actually felt good. It kept us from overheating. Thankfully, it did not run down into my shoes — that would have been nasty! My fingers did get cold again and were VERY cold by the time we reached the Juniper/Squaw Pass rest stop. The medical staff gave me two little hand-warmer packets that I put in my bike gloves. This helped a bunch! I made a fist so that my fingers and thumbs could get warmer too. We stayed just long enough to see the bear… yup, there was a bear hanging out near the rest stop. Apparently the night before he came by and got into the trash from yesterday’s ride. He was back to see if there were any scraps today. He was a 50-100 yards away and not a threat to any of us.

Our last 18 miles were cold – I reminded myself several times to ‘Stay focused!” as I think most of the stupid stuff happens near the end of rides when everyone is tired and already thinking about being done. The road into Bergen Park has some nasty pot holes and the pavement is cracked and crumbly in several places. A rider really needs to be careful and pay attention. I came around one corner and there was a fox in the middle of the road. It just watched me approach and ride by within 4-5 feet never flinching or moving away.  I guess it is used to sharing the road with cyclists. A little further down the hill, I was bumping along and my rear flasher light shook loose. I had to stop and remove the mount from my rear triangle. My hands were so cold that this trivial act took me about 5 minutes! Luckily I had my multi-tool with me, otherwise, I’d probably still be up there.

The rain stopped about 2 miles out of town. As I rode the final approach I saw my shadow for the first time all day! Nice way to end the ride. 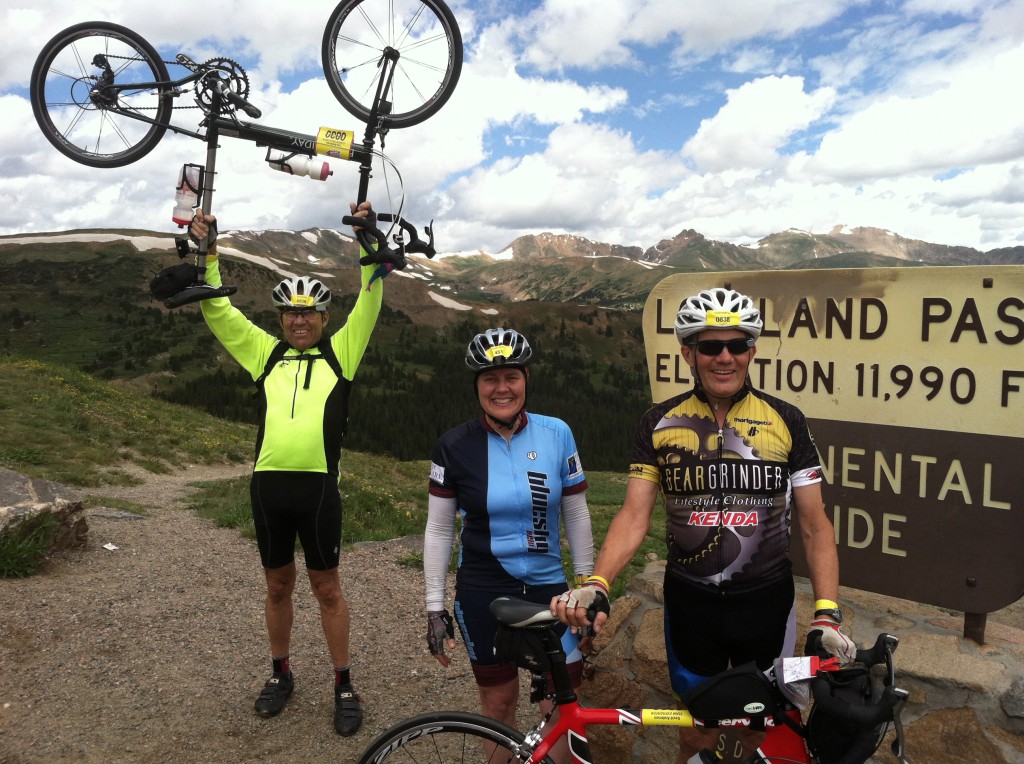