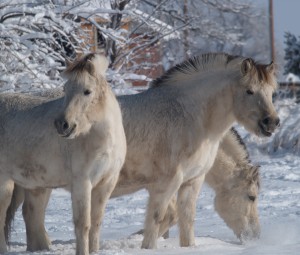 Our Norwegian Fjords didn't seem to mind the cold!

Too cold, too early, too long! That’s all I have to say about it. Today we finally broke out of our first official Cold Spell of the 2009/2010 winter season. ‘Bout 10 days ago we had snow and the temperatures dropped to the teens and twenties. Then, cold Canadian air descending on us and the temperatures dropped even further. Although I didn’t look at any official statistics or weather sites, my Subaru’s in-car thermometer read -10 on more than one morning as I headed out to ride at the Velodrome or off to work. Our highs for those same days were in the low to mid teens.  NOW … T H A T ‘ S    C O L D ! ! !

It was tempting to stay in bed when the alarm went off at 4:45am. The fear of not being ready for the start of the XC Tour on June 20th was enough to overcome any momentary hesitation. I have found, for me, that fear of failure is a very powerful motivational tool. Getting up is also a bit easier since I know that once I am at the Velodrome I become totally engrossed in the track experience,. As soon as I arrive at Boulder Indoor Cycling, I am wide awake and  intent on riding hard ad pushing myself to make the XC Tour more enjoyable.  I often focus on trying to keep pace with all the other riders although every day is different — even when the same people show up! The early morning crowd is , for the most part, very serious riders using track riding as part of their off-season (road racing) training. I remember one day a couple weeks ago when the pace line started to form and they lapped me repeatedly. That line was  MOVING! They would go three laps in the time it took me to go two. Needless to say, I didn’t even entertain joining that line! Then, this past Thursday, the same basic group was riding and I was holding my own. Sure, they still lap me, but on that day it was only occassionally. Maybe they’d go 10 laps to my 9. Not bad.

Today, even though it got up to a little over 45 degrees F outside  I opted to ride at the track.  It would have been nice to feel the fresh air against my cheeks and have the open road in front of me — but then again, it was 1) so windy the flags were standing straight out (west-to-east), 2) the melt was in full force so the roads were very wet and 3) all that sand, debris and salt has collected at the side of the roads…right where we cyclists ride. UGH! Scooter would NOT have been happy with me if I’d taken him out on those roads today.  I may have to think about enlisting Scooter’s predicessor for my early spring rides when the roads are still  a mess.

Today I rode for 1.5 hours.  My plan is to lengthen my weekend track rides as I get deeper into winter so that I’ll have a good jump on things when spring arrives and I can move the majority of my riding back to the ‘real’ roads.

Unfortunately, my heart rate monitor is acting up. Even though I had it on the whole time it only recorded heart rates for about 45 minutes. So I won’t put the specifics, but in that 45 minutes my Workload Index (WLI) was 662 and I spent almost 10 minutes between 153 and 171 bpm. My Max for the data recorded was 161 (higher than I generally get during a road workout).