I know they make the SW55+ ride early in the morning because there is little spectator interest in our race — and normally it is wicked cold this early in the season, but today starting at 8:10 in the morning was not too bad. What was a pain though was getting up at 5:30am in order to go through my pre-race routine at home and then again at the race site.

Yesterday I wrote up an index card with my race-day timeline. It includes everything — even the last potty stop before heading to the start line. Today I kept referring to the card to gauge my time. I noted that I left home a little later than I was supposed to…but the drive didn’t take quite as long as I had allowed so that was a wash. I got registered, picked out the layers I planned to wear during the race, pinned my race number onto my long sleeve Blue Sky Velo jersey and started my warm-up all according to plan. My warm-up did not go smoothly. Not that it was awful, just that I couldn’t seem to stay focused on a structured warm-up. I was all over the place effort-wise and I stopped a couple of times to get water and to shed a layer. Before I knew it my warm-up time was over and I had to start my final preparations. This meant putting away my trainer and heading for the porta-potty and then the start area. I was wearing my long sleeve jersey (no base layer) and long tights over my Blue Sky shorts (2 pair, of course). It wasn’t until I was at the porta-potty that I decided the tights had to go. The temperature was on the rise and although it was a tad chilly still, I just knew I’d overheat if I kept them on. So, after using the porta-potty, I made a mad dash back to my car and shed the tights. But, crap, where had I put my long fingered gloves? I dug through my gym bags tossing clothing all over the back of my Subaru – no gloves. Then, a light bulb went off — I had left them in the porta-potty. Zoom. Back to the porta-potty — cut ahead of everyone waiting in line and retrieved my gloves. NOW I was ready to race!

The SW4 were scheduled to go off 30 seconds ahead of us, the SW55+. There were 40-50 of them and four of us. Cathy Nicoletti, Ellen Hart, Susan Griffin and me! I approached one of the race organizers and asked if we could start with the SW4 instead of putting a 30 second gap between us — he said, “No.” A little later, Ellen brought it up again within earshot of the head official and without a moment’s hesitation said, “Sure, if you all are OK with it.” — and we were.  To me, that was the best thing that happened all day!

I honestly don’t remember the start of the race — I do know that it was after some volunteer women cyclist mentors went over some rules, tips and safety points with all of us.  Since we had planned to start after a 30 second delay, we were waaaay in the back and I couldn’t hear a thing anyway.  I did catch that the first lap would be a neutral lap — the real racing would not begin until after that lap was completed. So, there was no need to panic about starting at the back!

We rolled out with everyone else and I kept my eyes on the other three FOGs  (Fast Old Gals). I knew what Cathy looked like since I’ve ridden with her quite a few times and Susan was easy to pick out in her bright yellow COBRAs jersey. Ellen was a bit tougher as her jersey was similar to many others and this was the first time I’d met her. She was on Cathy’s team though so I figured they’d probably stick together if possible and help each other. My plan was to stay ahead of them all. Easy, right?  Not really….

The pace on the first couple of laps was uneven as everyone jockeyed for position and settled into their own paces. I found myself next to Cathy several times on these laps and I actually took a less-than-perfect line through a corner and got a scolding (justified…) from Susan Griffin. So, at least I knew where she was early on too. By the third lap the pack had stretched out considerably. I had no idea how many of the SW4 riders were in front of me. It really didn’t matter except from the standpoint of having gals to ride with and wheels to follow. The only riders I had to worry about were still behind me.

The course was interesting. This was the first time I had every raced on the course. The start finish is at the high point of the 0.7 mile loop. Shortly after the start/finish line the course takes a right turn and heads down a 3% grade then another sharp right hand turn onto a long, relatively flat stretch. Then the course takes another turn and immediately climbs back up to the start/finish on a 3% grade. Doing that climb once is no big deal, even a half dozen times might be OK, but I think we did it 15 or 16 times during the race.  Going into the race, that climb was my biggest unknown and my biggest worry. Last year, I would have struggled up that climb each and every time. I know I would have lost time and places on every lap. This year, I am fitter and I am a little lighter. The combination allowed me to stay with the other riders on this 3% grade. And, on several of the laps, I was actually fairing much better than those around me. Never did I struggle on the climb – not once. I do remember actually pushing myself on one of the ascents and wondering if I would “blow up.” I didn’t but I also told myself not to be stupid — that all I needed to do was stay ahead of the other FOGs and it would be so embarrassing if I over-extended, “blew-up” and gave the race away. I still rode hard, but I rode smart. I watched the SW4 riders and jumped from group to group in order to keep moving up. I was never sure how far back the other FOGs were and for all I knew, they could’ve been riding with the same group of SW4s as I was. Cathy was my biggest threat and I half expected to turn around and see her sitting right on my wheel !

That didn’t happen. I stayed strong. I was in the front on the ‘prem’ lap and won a massage. Not bad, eh?  And, other than developing a slight stitch in my right side with two laps to go, I felt really good. I did not suck air, my legs did not burn or scream NOOOO!!!  I was firing on all cylinders. What an awesome feeling!!!! Winning was sweet — but feeling the way I did while I was racing was priceless. 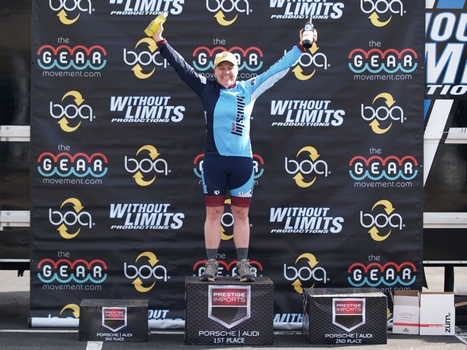 I stayed and watch Brian Anderson and Doug Richards race in the SW4-45+ category. There were a bunch of racers and they were covering a lot of ground quickly! I managed to snap a few photos of them during the race. 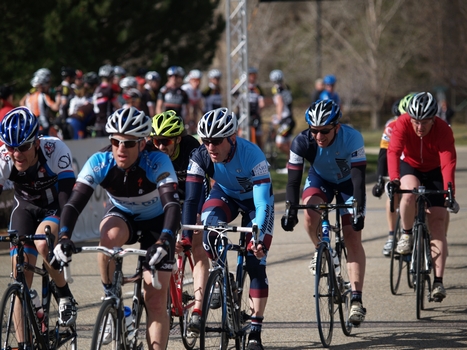 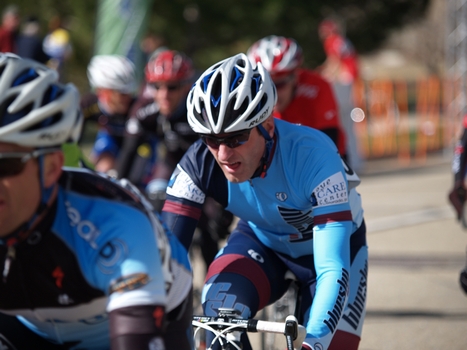