For the SW55+ group, it was a REAL time trial championship. I think every eligible woman in BRAC was entered. The best of the best, as well as all the rest of us. We had 15 riders registered. That was the second largest women’s category at the championships. And, the largest (SW4) only had two more women registered! Looks like the BRAC might want to consider keeping (or expanding!) the categories for older cyclists!

As I like to say, “All the usual suspects where there.” Sue Lloyd raced in her “real” age category instead of in the SW45+ as she has been doing for the non-championship races. Kristine (Kris) Johnson, who I have yet to beat, was also there and slotted to take off right in front of Sue Lloyd who had the coveted last spot of the category.   I”m not sure how the determine the starting order,  bu perhaps Sue went last since she was defending her title from last year. And, perhaps using the same logic, since I didn’t even enter last year, I was one of the first to go. Carla Flores had the worst position – she took off first. Then Pam Alexander was supposed to go, but she was a “no show”. I was up next. I was in line waiting to go at the appointed time. Outwardly, I was pretty relaxed as my drive over was pleasant and my warm-up went well.  But to say I wasn’t nervous would be a big lie — I was plenty nervous.  Given the field, there were probably 6 or 7 of the riders who I felt could make their way to the podium. Last I checked, there was only three spots…and I want to have one of them! I had my work cut out for me. I’ve never beaten two of the women — Sue and Kris — both are extremely talented and equally competitive. Then there is Carla Flores and Maureen Sweeney. Carla and I have a mixed record — but I did take her in the Haystack TT, so maybe I’d be so lucky to day too. Maureen has been out so far this season with her arm in a cast. But, last year she gave Sue Lloyd some serious competition and finished right on her heels several times.  Maureen was a bit of an unknown going into today’s race.  Rounding out the field of threats was Ellen Hart and Beth Graff (from out of state). The rest of the women I felt I could beat based on previous head-to-head competitions and from seeing how they did last year against “the threats”. Of course, any one is capable of having a great day…or a really bad day, so I guess that’s why we race the race instead of just mailing ribbons to the folks who enter!

The countdown was the same as always…”You’ve got 10 seconds.” Then a short pause. “5”, “4”, “3”, “2”, “1” – “Go.” And I was off. The course started out to the east with a slight downhill for the first mile and a half or so. That, of course, means that at the end of the race, there is a slight incline for that same distance. Going out though, it didn’t feel much like a downhill because of the wind blowing in off my left shoulder. Carla was a speck. I knew if I was going to have any chance of being on the podium, job #1 was beating Carla. And, she was the only rabbit I had. I was hoping that she was having a great ride — so our pace would be high and maybe on par with that of Kris and Sue at the back end of the pack.

My goal was to ride the first 5-10 minutes at about 190-200 watts. Then if I was feeling “fresh”, try to hold the 200 watts, otherwise keep it closer to the 190 until the half way point. At the turn-around,  the idea was to go a little higher, perhaps slightly over 200 watts and bring it home strong on that finishing incline. Well, that was the plan anyway.

I succeeded in blasting off the start line and getting up to speed (about 22-23 mph) quickly. But after a minute or so, when I’d expect to be settling into a rhythm, I had a hard time getting comfortable — if there really is such a thing in a time trial. My watts jumped erratically between 150-210.  I found myself shifting more than usual trying to find a gear/cadence combo that would work. It just didn’t fall nicely into place as it has in the other time trials.  The wind might have played a role in this as well. You’ve got to realize that you are bound to have an off day sometimes. You just hope it doesn’t fall on an important race day!  Unfortunately, it looked like today might be one of those days. Things felt a tad off and I was having to work at making it feel right instead of it just being that way without any effort.

I pre-rode this course two weeks ago and did not have any problems on the ride. That ride went REALLY well, as a matter of fact.

Oh well. Not much you can do about it in the middle of a race – except keep pedaling and trying to stick to the game plan. So, that’s what I did. Carla didn’t seem to be getting much bigger in front of me, but neither was she getting smaller. That was a good sign. The course made a sharp right hand turn then after about a quarter of a mile,  a sharp left that had me heading east again. Then the long straight section up to the turn-around point. This part angled up ever so slightly. It felt more up hill than it was because of the wind.  The wind was mostly out of the north, which made it a cross wind, but there was an east/west component that was quite variable. Sometime there was definitely a headwind to deal with, but at other times not so much.  My watts were a little lower than what I had hoped for on this leg of the race.  There was a little voice in my head, a governor of sorts, that warmed me about going out too hard on the first half anyway.  And, the little voice would be right. It is far better to go out a little too slowly than a little too fast. Go out too fast and your muscles accumulate lactic acid at a rate faster than the body can clear and eventually you find that you are unable to maintain the intensity.  If and when that happens, your intensity drops a LOT and often you end up limping to the finish.  Another thought that I had shortly after the start was that the wind was likely to be in my face on the return trip so I’d better leave just a little extra gas in the tank for that.

The first 10K went by pretty quickly. Before I knew it I could see the orange traffic cone that marked the half way point. I didn’t let up. I kept going hard as I approached the turn-around. The poor volunteer with the orange flag who was making sure we say the turn. As I came into the turn at full speed, he started waving the flag faster and more violently. I’m sure he thought I was spacing out and didn’t realize I should be slowing down to make the turn. Hell no! I wanted to go into that turn as hard as I could and brake as late as possible and still make the 180 degree turn around that cone.  It worked beautifully! I wish I had it on video as I suspect it would be YouTube worthy.  My turn was tight and fast. I jumped out of the saddle as soon as I came around the cone and was sprinting back up to cruising speed.  Those few seconds were probably the highlight of my race.

Once I was heading back west, the second phase of the race strategy unfolded. The plan, remember the plan…. was to go harder the second half than the first. Given that Carla was still ahead of me, and seemed to be about the same size as when we started I had plenty of motivation to go faster! I told myself that there were 6.2 miles left and it was now or never. I had to start closing that gap…NOW! As I suspected, the wind was still a factor and would be for the rest of the race.  It was not going to be a “helpful” wind at all. It was mostly a cross wind, which meant when we did the zig-zag a couple miles from the finish I’d be going into a headwind for a quarter of a mile or so.  I started to really lean into my work. I started seeing the rest of the SW55+ on the other side of the road as they headed for the turn-around. They all looked strong! Up ahead was Carla, but there were also a couple of other riders and that made it difficult to keep an eye on her. She’d obviously passed a couple of the guys who had started in the group ahead of us. It was hard to judge how far ahead of me she was now — and was the rider I thought was her really her? I had a momentary panic at the thought that maybe she’d passed a bunch of riders and was waaaaay out in front of me! Darth and I increased our effort. I was running at or slightly above 200 watts now. I kept this up all the way to the bottom of the incline. I’d passed a couple of the guys that Carla had passed and I knew that was a good thing. The wind was difficult as I headed north for that quarter mile. I kept telling myself that this was where I had to be strong. This was where I would be stronger than my competition. Once I made the final turn and was heading up the last incline to the finish line, I knew (or at least hoped!) there was only about 3 minutes left in the race. As if I turned a switch, I cranked it up to 230+ watts. From drills that Alison has had me do, I know I can ride HARD for 3-5 minutes …. I hoped that translated well to riding 3 minutes HARD after riding 28 minutes pretty darned hard. I was huffing like a locomotive when I crossed the finish line. I was spent. I just hoped it was enough.  After I crossed the finish line I kept going and didn’t stop until I’d completely warmed down.  By then, everyone else was finished. The SW55+ group of gals are pretty special. We compete hard during a race, but otherwise everyone is friendly and genuinely supportive. It is absolutely the best. A group of us wandered over to see the results — I didn’t have my glasses with me, so I didn’t know I made the podium until one of the other gals read it and told me. Too funny!!! 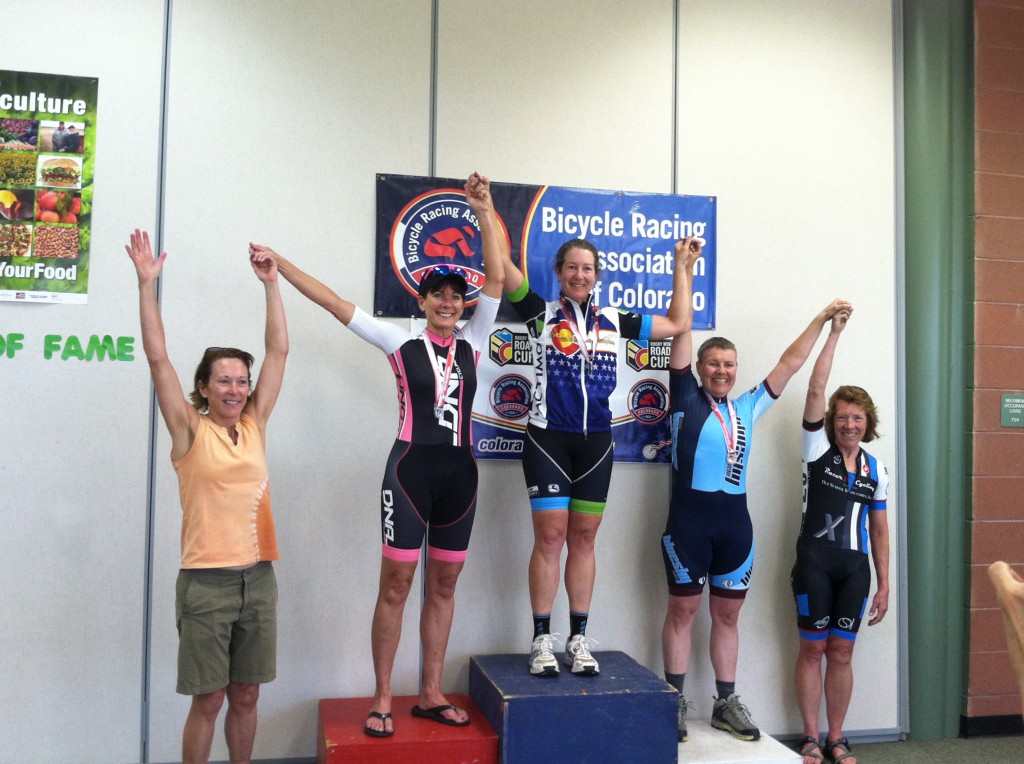