Got up just before dawn (5:30am) so I could drive down to Niwot to join two co-workers for a ride. John drove in about the same distance from the opposite direction and Rick rode to the meeting spot on his bicycle. I arrived so that I had plenty of time to paw through my ride bag a few times and pick out which clothing I thought was most suitable for the ride. It was a very pleasant 58 degrees F with a very mild breeze from the east and perhaps slightly out of the north. I opted for my “sun sleeves” — I have two pair, but one are slightly too large and have taken to sliding down my biceps at the worst possible moments. Naturally, I chose the other pair to wear this morning. While waiting for John and Rick, I snapped a quick shot of the “Bike Tree” at the Park & Ride. I was wondering if a few folks left their bikes here over the weekend — guess they drive here tomorrow morning and then ride the bikes into the office. Very clever! 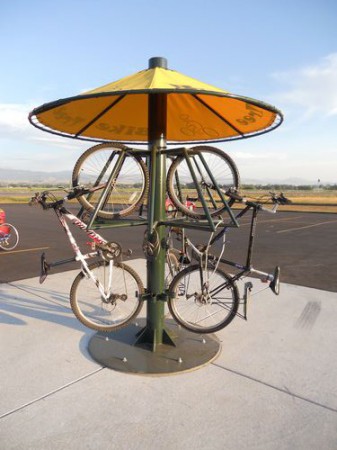 John arrived at 6:55am, and Rick came in to the Niwot Park & Ride a couple minutes after that. After we exchange a few pleasantries we were off. To be perfectly honest, I was a bit nervous about being able to keep up with the guys. John mentioned in an email exchange that he was looking to ride at about a 16 mph pace. And, Rick is a big, strong rider who looks like he averages more like 19 or 20 mph. If I’d been riding Scooter, I wouldn’t have been quite as nervous — but my solo pace is more like 13-15 mph on “Big Blue” (my bright blue Giant OCR1). Riding in a group is usually good for an increase in a mile or two per hour though, so I hoped that was true for me today! A realively flat route would help too. 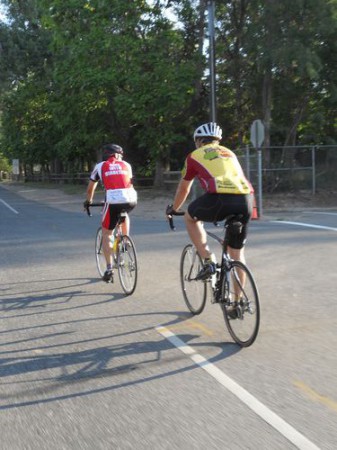 John leading Rick while I fall off the back to get the photo!

Our planned route was to ride up North 75th paralelling the foothills.  Through Hygiene and on north until we cross Hwy 66, continue north for a couple of miles then go a little east on Woodland Rd until the next road heading north (N. 83rd). From there we would zig and zag a bit, dropping down to the Little Thompson River and then sprinting up a short spurt of a hill. Once we crossed into Larimer County, the road became Cty Rd 23 — although this really wasn’t an important distinction. Onward with the foothills until we turned left and started a slight grade to the foot of the Carter Lake dam.

John and Rick pulled off at the park’s fee station for water and I took advantage of that to get a head start on the switchbacks that carried us up to the top of the dam. This is a climb I always enjoy. I am never fast, but neither am I slow. I made good time today and had a few moments at the top to catch my breath before the guys joined me.  There was lots of activity around Carter lake. We saw numerous bikes, boats on the lake and campers all over the place. A quick stop at the north-end store for a potty break and then onward to one of the best downhill stretches in the state!

John is not a big fan of fast descents, but Rick and I were both game. I actually saw 51 mph on my “analog” (Vetta C-10) bike computer — which is a new personal best. My previous fastest was 50 mph coming down the straight-away out of Estes Park at the top of Glen Haven. Today my top speed was just before the bottom of the descent on the long straight run out. There was little or no cross wind, so I was able to just let ‘er rip. My bike felt solid and next thing I knew, I looked down and saw 51 !!!  My Garmin missed it though — so I’m not sure I can count this as an “official” record. Rick was ahead of me going the same speed — or even a hair faster!  Wahooooo!

John’s plan included riding out to Co 34 and turning around there in order to make the mileage work out. This ride is the last training ride for him before taking on the metric century Diabetes benefit ride, Tour de Cure, next weekend. John is a “Red Rider” — someone who has type 1 or type 2 diabetes.  If you want to sponsor John, you can go here.  When training or riding in an event, John has to constantly monitor his blood glucose levels and is very careful about his fueling! I know from riding across the country how important keeping “gas in the tank” is as well as staying hydrated. If I forget to fuel, I notice it and my performance may suffer — if John forgets to fuel, it could be the end of his ride and there could be much more serious health implications.

Back to our ride — when we got to Co 34 we didn’t even stop, we just looped back and kept on pedaling. I’d have to say, Rick was probably the one most responsible for our speedy return! He is a very strong rider. All three of us are comfortable in a pace line so we often just naturally found ourselves in an orderly 3-rider line. We took turns at the front and since I usually ride solo, I thoroughly enjoyed the times when I got to ride behind Rick or John! I forget sometimes just how much energy you can save by riding in a pace line!  We pulled off at Cty Rd 4 and stopped in at the farm for a few minutes. Refilled our water bottles, used the facilities and then were back on the road for the final 10-mile push. Other than a couple of short uphills, the overall trend was either flat or slightly downhill. Along this stretch we started passing a number of riders who were part of the Safehouse Progressive Alliance for Nonviolence (SPAN), ‘SPAN the Rockies’ 75 km (45 mile) ride. Another option for that ride that I was considering doing is a 200 km  out-and-back along the Peak-to-Peak highway between Boulder and Estes Park. That one sounds pretty tough! Here’s their route map — SpanTheRockies. Everyone looked like they were having a great time. We had nice cloud cover all morning and the temperatures hardly got into the 80’s before we were done. Rick peeled off at Niwot Rd so he could get home and start planning for an afternoon gathering of friends and family at his house. John and I rode the last mile or so alone — sure missed Rick’s “engine”  but we managed to get back under our own power.  We all agreed — it was a wonderful ride and great company. All said and done, we rode an average pace of 16.4 mph which is above my normal pace on “Big Blue”. John is more than ready for next weekend’s ride and now I have two new cycling buddies to ride with in the future.