Well, I realize I still need to tell you about my Bicycle Tour of Colorado experience — but right now, I want to share my ascent of Mt Evans. This climb has been on my bucket list for a several years. Friends of mine from work have put together two rides up the mountain. Both times I was unable to join them. Once I didn’t even know they were going!

Yesterday I joined another Blue Sky Velo rider, Rich. Rich was doing some pre-race practice and invited folks from the team to join him. I was the only taker. We left Westminster about 8am and got to the parking lot in Idaho Springs at the bottom of the climb in time to start riding at 9am. The Red Rocks Century was also heading up the climb — but at Echo Lake they were continuing on towards Evergreen and we would be taking a right up to Mt Evans. The Red Rocks Century conveniently had a rest stop where we parked so I took advantage of their Port-a-lets. I’m so lucky — there always seems to be one when I need one!

As Rich and I prepared to ride up the hill, Rich’s partner, Michael set out for a short spin around town. Michael would then meet us up at the summit so we wouldn’t have to worry about making a made dash off the mountain because of storms…nor would we have to endure the rough roads during a descent. We were going to descend in a Range Rover!

Rich and I headed out together and rode that way for about 15 minutes. Then as the road started to tilt up a bit more (maybe 4%-5%), Rich pulled away. He’s a very smooth, strong rider and it didn’t take long for him to disappear out of sight. That was the last I saw of him. I did ride with (and even pass some!) century riders. They were at mile 33 of their ride so had a long day ahead of them. My entire ride was only going to be 28 miles. However, in that 28 miles, the elevation rises from 7,500 to 13,500 with a pretty steady 4-7% grade.

I settled into a rhythm pretty quickly. Per my coach’s instruction, my goal was to keep my effort such that my power readings stayed under 160 watts. I found a cadence and a gearing combination that allowed me to do this and maintain a moderate heart rate. As I was climbing, I struck up a conversation with a cyclist who had served out country in Afghanistan and Iraq — on multiple deployments. As a result of conditions encountered on his tours of duty, he now had respiratory issues and was operating with only 70% of his original lung capacity. He said that he can’t race like he used to, that time trials and crits are out of the question but he still enjoys doing endurance events like the Red Rocks Century. We talked about the hardships of war and how it has impacted an entire generation of young men and women.

We parted ways just before the Echo Lake lodge. I stopped there to get water and use the restroom. It was there that I realized I lost my helmet cover — which was supposed to be my head protection in case of rain. Rain was predicted for the afternoon and it had poured cats ‘n dogs at the farm the day before so I was counting on getting wet at some point. Couldn’t turn back to find the helmet cover now. The only option I had was to continue climbing. I still felt good though and at this half way point was starting to believe that I might actually make it to the top!

As soon as I rode past the fee gate, the road narrowed and the whole feel changed. I felt like I had transitioned from a busy city street to a quiet, rural back road. Very few cars passed me and I caught glimpses of wildlife up ahead. First I saw a deer with its fawn cross the road and head down into a forested area. Then a bit further up the road, a marmot scrambled across and dropped between a couple of boulders completely out of sight. If I hadn’t been paying attention, I would have missed it all together as the marmot was only visible for 10-15 seconds.

It was slow going and normally there might be great vistas to take your mind of the climbing but today the cloud ceiling was extremely low and I spent much of the climb completely engulfed in clouds. My bike’s tail light was on fast-blink and knowing that the light would be visible even in the heavy cloud fog was very reassuring. The road grew increasingly narrow as it went up in elevation. There was a half mile stretch that was severely damaged by frost heaves and perhaps spring runoff. It made me wonder about the length of the construction season at 13,000’. I figured it was on the order of weeks, not months.

As this was my first time up the mountain, I had no idea what was ahead of me and I had read that the climb was ‘HC’ and super-difficult. I kept waiting for a stretch that I would see off in the distance and start to doubt my abilities. For sure there would be a steep stretch or relentless grades or I would start to feel the effects of the altitude and lack of oxygen. None of this really happened. I just kept at my 6-7 mph pace, generating between 130-160 watts while pedaling at 60-75 rpm. My effort stayed in a very narrow zone the entire day. For 3:43 minutes of pedaling. Rich and Michael drove down the mountain to meet me when I still had a little over a mile of climbing left. I’m sure they just wanted to make sure I was OK. Once it was clear that I was still fine and planning to summit, the turned around to meet me back at the top. About 10 minutes later, I joined them. It was a wonderful sense of accomplishment. I was a bit surprised that it wasn’t more difficult that it was. (Pleasantly surprised, I might add). I took a few photos with my iPhone on the way up and Michael took one of me and Pogo at the top, and one of me and Rich with the bikes as well.

Guess I can check this one off my bucket list! 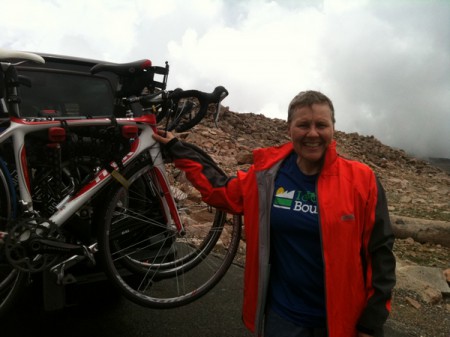 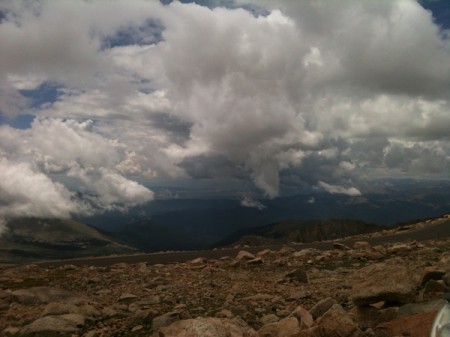 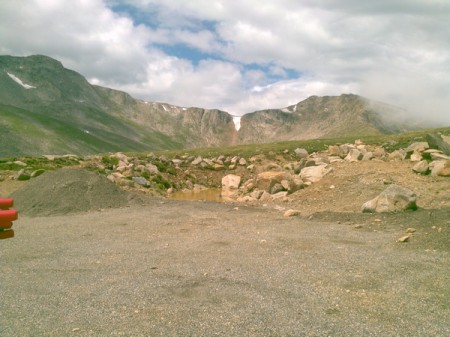 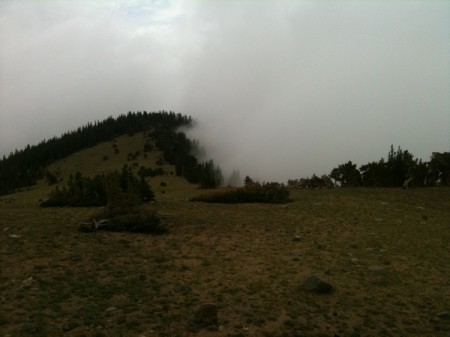