Today was a short but intense ride. My neighbor, Sara, set a ferocious pace and I decided I’d do my best to hang on! The route itself has its challenges, but add to that 25-35 mph winds — we had a REAL ride on our hands!  There was a brief stretch where I had flash backs to the infamous 21 mile northbound segment of nasty headwinds on the ABB ride.

I got Sara an ABB jersey for her birthday — looks good on her and she’d fit right in. Hope that she’s able to wear it as a tour rider someday. 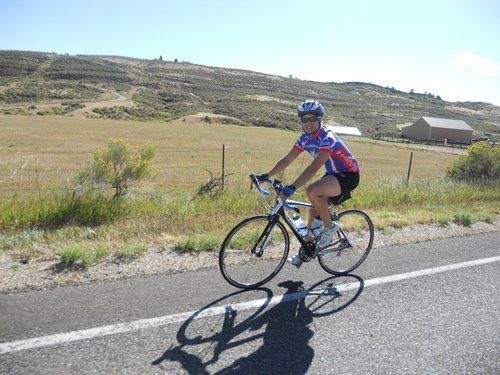 Sara wanted to do the Carter Lake loop in reverse — which meant going up a half to three-quarter mile climb with a grade of 10%-14%. Sara got a good jump on me at the bottom of the climb and I spent the rest of the time reeling her back in. It actually felt good. I watched my heart-rate rise and top out at 162. For me that’s pretty high. But, I didn’t feel like I was out of gas and I honestly think I could have either maintained this level of intensity or even increased it if I needed to. No Lance-like sprint to leave Jan Ulrich behind, but it did have that feel to it.

Having said that, after a short level spot where both Sara and I managed a slight recovery from the climb, there is another (much shorter) steep climb. This time when I dug deep and tried to attack the climb, my legs weren’t having any of it. Apparently, there was quite a bit of lactic acid built up by my earlier effort that had not cleared my bloodstream yet! So, I took my time and met Sara at the top!

The ride home from Carter Lake was still windy, but more of a cross wind than a head wind. When we were heading directly away from the foothills we felt a mighty push! As we neared home, I told Sara that had she not gone on the ride, I either 1) would have turned around at the end of my driveway and never gone, or 2) turned around long before we got to the steep Carter Lake climb. Funny — she said that she would have done the same!  I’m glad we went — this will be a ride I refer to in the future because of its wind and the effort we both put into finishing strong inspite of it.

When we got home, the sky south and west of our farm was filled with smoke. There is a HUGE fire burning in the foothills west of Boulder. The fire is centered right where Beth Laber and I rode on Saturday! Very scary! This shot was taken at about 12:30pm from our farm. 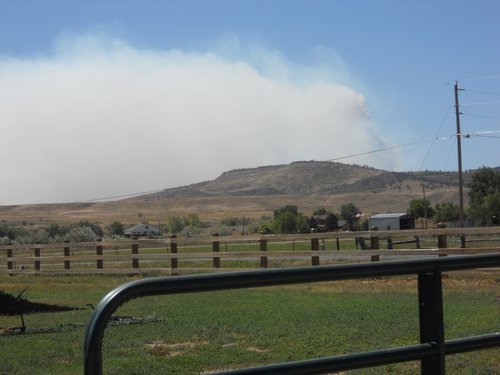 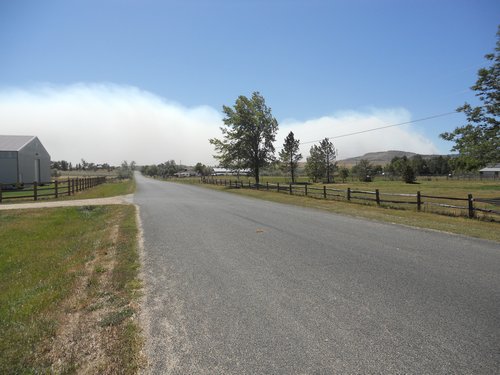