It is hard to get moving when you are on vacation. That is especially true when you are camping and snug in your travel trailer when it is only 55 F degrees outside. The air in Steamboat Springs is so fresh and crisp in the morning it is almost intoxicating. After a leisurely start, I picked up the pace a bit because my plan includes riding up Rabbit Ears Pass (again!) to watch the riders go over the top of the pass. Originally Liz and a couple of her friends were going to ride too. Liz decided it sounded too much like work — and she is on vacation too — so it was just me. Liz’s friends were still riding I think and they planned to start out at 9:30am. The race was set to start at 11:30am. Two hours seemed like more than enough time. So, when I finally got my act together and pulled out of the driveway at 10:30am, I sensed I might not get to the top ahead of the pro field. No problem though — I could stop anywhere along the climb and watch the race go by. 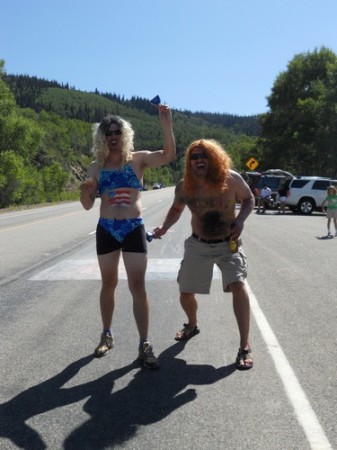 There were lots of folks set up along the side of the road as I climbed. There were also plenty of cyclists making their way up the climb as well. I was in good company. There was quite a bit of diversity in the group of cycling spectators. From the super fit, matching kits to the slightly heavy-set rider on a hefty mountain bike.  I started playing the (+)/(-) game where I keep track of how many riders pass me and how many I pass — but the math got too messy. Something about doing higher leel calculations above 8,000′ when your brain lacks oxygen. Truth be told, the math was easy, but trying to remember the current value was impossible while also focusing on making forward progress.

Today’s ride was vastly differnt from yesterday even though the route was identical. The energy of the crowd powered my pedal strokes and having the distraction of crazy costumes and yelling fans  made the time and miles go by so much faster than yesterday. I was rather surprised that my pace today was the same as yesterday. I know that my legs were kinda tired and expected my pace to be slower as a result. I’m sure the difference was the crowds. That, and I didn’t want to be seen stopping or “suffering” in front of all those people, so I had not choice but to pedal on. 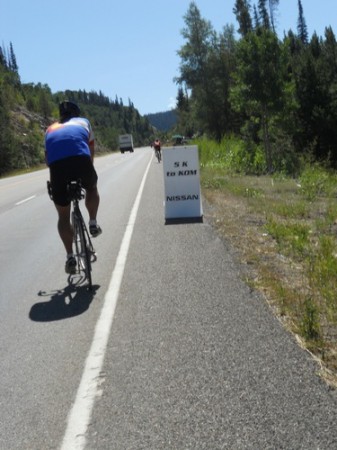 I was still a ways from the top at 11:30 when the racers crossed the start line and headed towards me. I have visions of being chased down by the peloton in much the same way breakaways get gobbled up in the last minutes of a race. I found myself in a real race against the clock. I debated whether to try for the summit or stop at a shady spot and wait for the racers to come by. Each time I decided it was better to keep going and that I still had a chance to make it to the top before I was overtaken by the pro cyclists. I stopped briefly at the 5km to the KOM (King of the Mountain) marker and called up ahead to Beth and the rest of our party. They encouraged me to keep riding — that I’d make it.  So I kept pedaling.

The number of spectators increased with the elevation. Now there was a solid line of specators. Many in cycling clothing with bikes leaning up against trees or vehicles. I’d say that a couple hundred cyclists had ridden up to their viewing location. That is soooo cool. I was proud to be among them. Of course, most of them were already in position while I was still trying mightily to get to my spot. I knew it was going to be close. I was close enough that I really wanted to make it to the top before I was forced off the road by all the vehicles that come before the actual racers. They couldn’t be that far behind me. How long could it take them to cross town? And then, once they hit the climb — what then? How fast would they take the 6% climb? I was puttering along at 6.5 mph (just like yesterday…) and I had been passed by one or two riders who I estimate going as fast as 10-12 mph.  So how much faster would the pros be going? I had a feeling that they were closing in on me! I leaned a little extra into each pedal stroke. I did not want to be gobbled up by the pack! 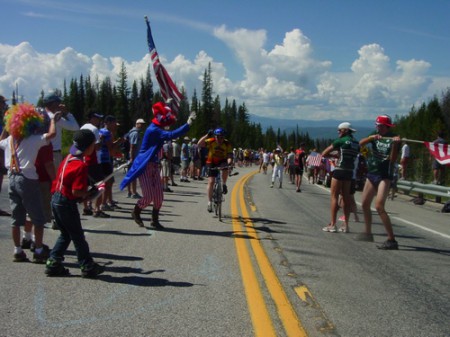 The last kilometer was a zoo. I could no longer see the side of the road and the breakdown lane (..bike lane) was also pretty full of people. I found myself forced into the road. As I got closer to the summit, I found that not only was I riding in the road, but that I was being funneled into the middle of the road. Folks were ringing their cow bells and shouting encouragement to me. They were all keyed up and I think they treated this as a dry run for the real thing that would be coming by sonn. I passed one guy dressed as the devil and he shook his pitchforth and hollered “Suffer! Suffer!” at me as I rode by. Too funny. Most other folks were more positive. I felt like I was part of the real race! I rode right up the middle, past Uncle Sam, and on to the summit banner knowing that I got there before Levi and George and the rest of the gang. Not by much, but enough that I could go back down a ways to meet up with my group before the race vehicles started coming by. 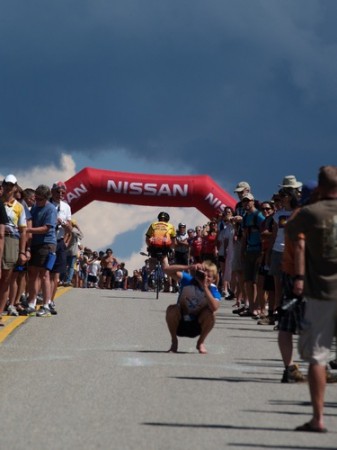 This time, when the riders came by they were much more spread out. The climb had really taken its toll on lots of the riders. There must’ve been 15-20 minutes between the first riders and the last riders. We wondered if they would be able to regroup and become one big peloton again before they rolled into Breckenridge. Here are shots of the crazy spectators and the  riders as they closed in on the summit. 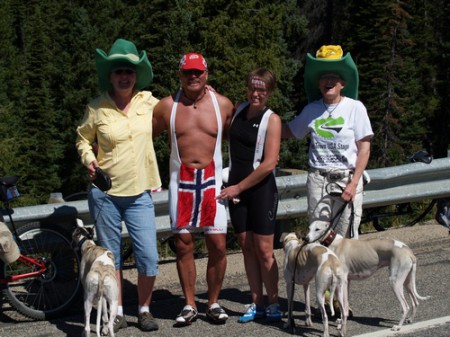 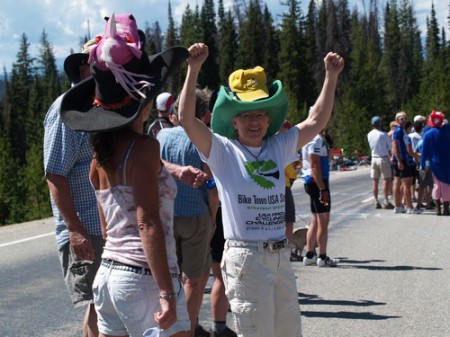 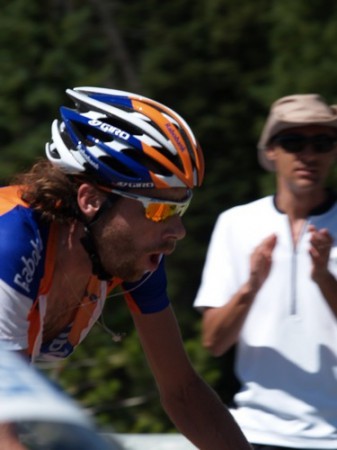 First Rider up and over, Laurens ten Dam 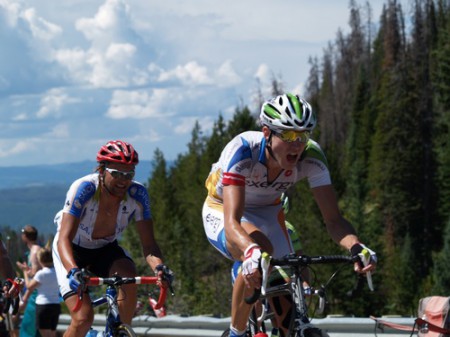 Got Oxygen? Group with Levi Leipheimer. Everyone looked like they were just about tapped out at this point. They would recover on the long descent though, so this was definitely the time for riding in the Red Zone. Check out the guy in the evening gown behind this Radio Shack rider...George Hincape - a little ways back from the leaders