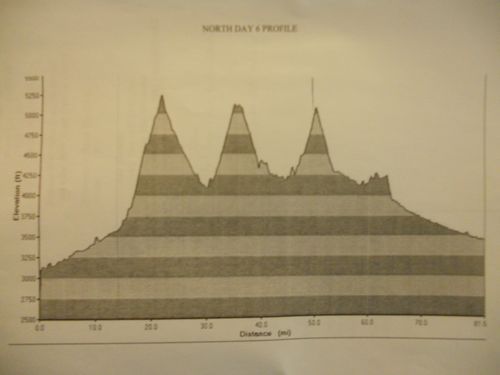 Had a great day. Eastern Oregon looks so much like Colorado it isn’t funny. Leo and I both had flash back to Ride the Rockies days — even though, to the best of my knowledge, their route has never taken them quite this far north and west.

The profile looks worse than it was although there were several long stretches of 7%.  I thoroughly enjoyed the climbing and the views were fantastic. The area is mostly cattle and hay fields. There were only a couple of small towns. I’m still scratching my head about a “Congestion” sign we came across. There was about as much congestion at that location as there is green cheese on the moon. NONE! What do you think? 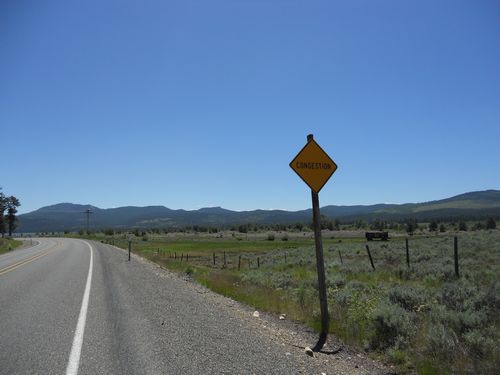 We had fun at one of the rest stops. The ride leaders, Mike and Karen, “hitched” their bikes up to the Oregon Trail wagon and pretended to be pulling it while a few of us were at the reins. 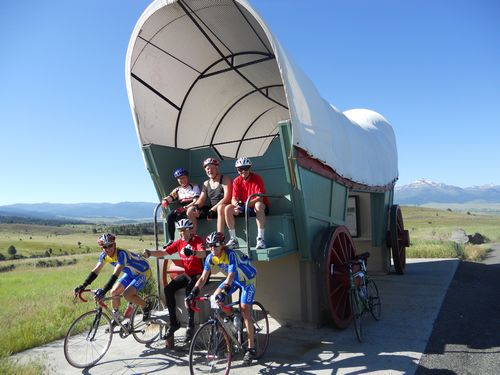 Like I said earlier, these folks with America By Bicycle really treat us well! And let me tell you, Mike and Karen can RIDE!!! I didn’t have any trouble with the climb…. spinning along at 7-8 mph. When they came up behind me there was a flash of color and whooosh, they were gone! I’ll bet they went up it at 12-15 mph and I think they were even chatting as they went!!! I know they gave me some encouraging words (over their shoulder) as they rode by. 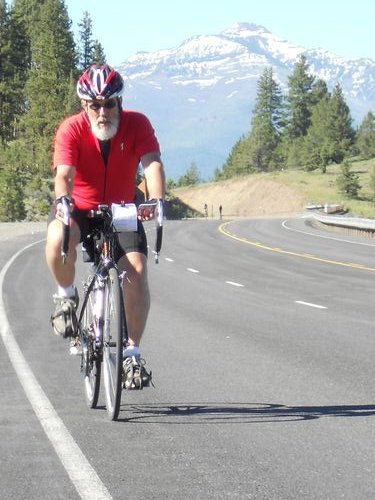 Shortly after we left that SAG I snapped this photo of Gale as he crested the top of one of the climbs. Gale is only with us until Boise. He and Carl are doing the ride across the country in pieces. This was the first segment for each of them. According to Carl, now that they know the ropes, they’re going to sign up for two segments next year. 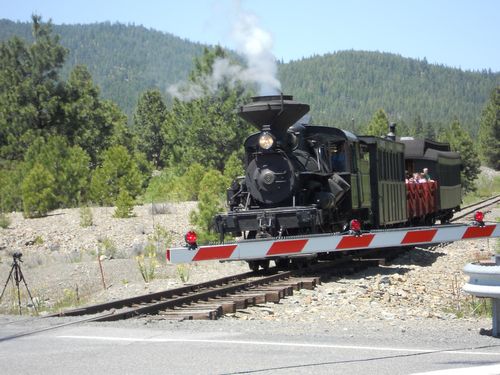 Rod and I were riding together when the Sumpter Valley steam engine came by. It was filled with smiling tourists. The train makes a loop through the valley. Boy was I surprised as I started to cross the railroad tracks and the guards came down!  I got across safely and then saw the train! The engineer blew the whistle numerous times as they crossed the main drag. Don’t think many of the group got to see this — sure glad I did!

… Drats, out of time again. Good thing there’s a rest day coming up soon. I want to go back and fill in the gaps while I can still remember most of the details! We all know how my memory works…or doesn’t!

Tomorrow is our last day in Oregon. Weather reports are calling for HOT ‘n dry. It will be our first experience on an interstate. There was quite a lot of information at Rap tonight about how we handle that situation. As an added bonus, we have to deal with a 1/4 mile stretch of interstate road construction too.

NOTE: Scooter fell out from under me today as we ended up on the very soft gravel shoulder as I came up alongside Ian. I saw the fall coming (took forever to go over…) and just kinda crumpled/fell to the pavement. Didn’t get hurt at all — just a tad embarassed. Haven’t done that in a looooong time! Hopefully I won’t be doing it again soon!