Another great day in paradise! An early start after another hotel lobby breakfast (hardboiled eggs and a packet of oatmeal, OJ).  Like yesterday, it seemed like all 54 of us … plus the staff …. were trying to eat breakfast at the same time. But, even though it was like playing bumper cars, everyone was courteous and it all went smoothly.

If you didn’t read the scale on the map today, it looked like we’d have a really tough afternoon — 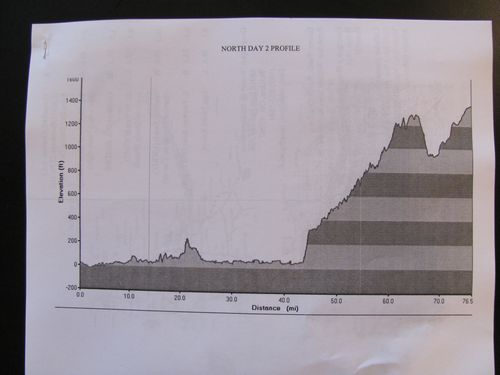 I fell in with some fast riders this morning and with the help of a 10-15 mph mostly-tailwind, we covered the first 17 miles in the first hour. Of course, as these things go, the next 20 miles took us almost 2 hours! The morning route was along highway 30 which turns out to be a fairly popular route with cars heading to Portland. So, we just tried to blend in with the morning commuters and made our way to town.  After the first SAG stop, we were on a lovely bike path that took us down by the Columbia River and at one point we rode right past the end of a take-off runway at the Portland Airport  and got “flown-over” by a commercial airliner — kinda like being “run-over” by a … but different. 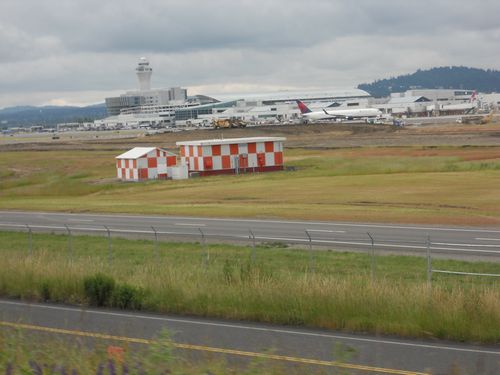 Glad that one got off the ground safely!

It is hard enough to navigate bike paths in a city you don’t know from a cue-sheet because there are generally no “turn at the second stop light” — no stop lights on bike paths, “turn where the old church used to be” – nope, none of those either, be today, we even got detoured from our bikepath. A paving project required that we go a couple miles out of our way — which sounds bad, but had we continued everyone would have been cleaning tar and dirt of their bikes instead of updating their blogs right now. 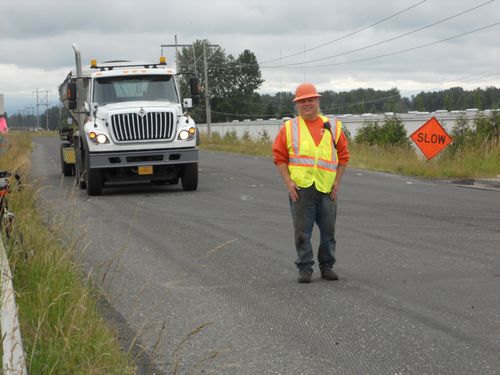 This is the nice guy who suggested we leave the bike path (it’s off to right and about 20′ down an embankment,y the river).

After successfully navigating thru the detour, we got to the second SAG of the day. It was at a very nice part – complete with facilities – which is not always the case. When I signed in at the SAG, I saw that a bunch of riders had been here before me. I wouldn’t have known by the food  — the staff keeps the snacks replenished and whenever I show up to a SAG and look at the spread, I figure I must be the first one there.

Once we left Portland’s bike trails, we headed back out on Route 30. There were some short climbs and we had to watch carefully for a not-so-obvious turn. I’m glad I was riding in a group when that we came up on it — I’m pretty sure I would have missed it and who knows how long it would have taken before I even realized it! (The cue-sheets should keep getting lost to a minimum though – For each instruction, there are three pieces of data. The distance since the last instruction, the total distance from the start and the instruction itself.)

This last stretch I was riding with Leo and his two roommates, Andrew (a Brit) and Rod (a New Englander). 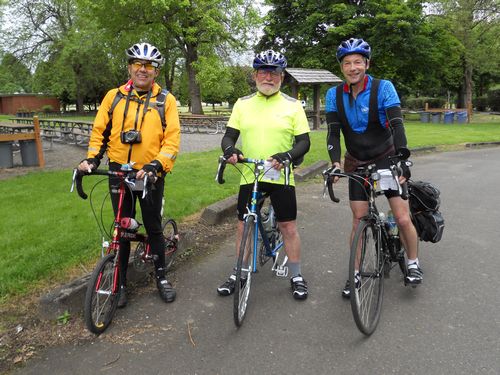 (l-r) Leo, Rod and Andrew taken at the SAG – see that lovely restroom in the background!

Back to my story — once on the hard-to-find road, we were out of traffic and in a rather rural neighborhood. We started passing numerous nursery operations. All it took was a quick glance to see that at any one of them they had more trees that an entire town might have in Colorado. Rows and row of saplings. I am just so taken by all the green and lushness. As we continued to admire all this, I looked up ahead to see where the next turn was and OMG — up in front of me, looming really, was Mt. Hood.  The next 30-45 minutes was spent riding a quarter to a half mile then stopping to take another photo of the mountain. Every time there was a break in the trees I think we stopped.  Here’s what we saw — 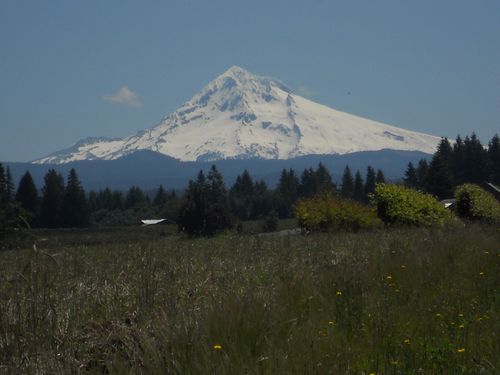 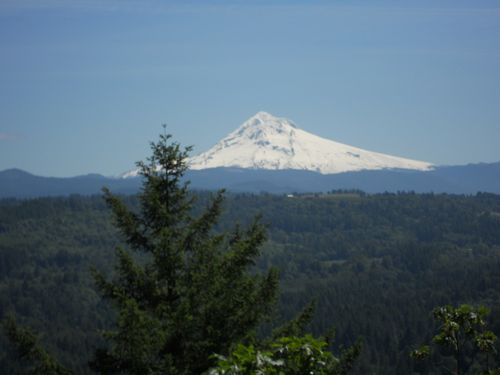 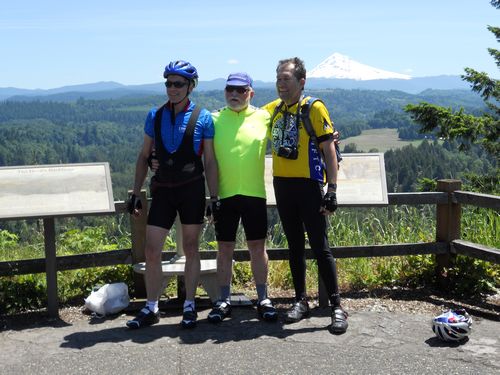 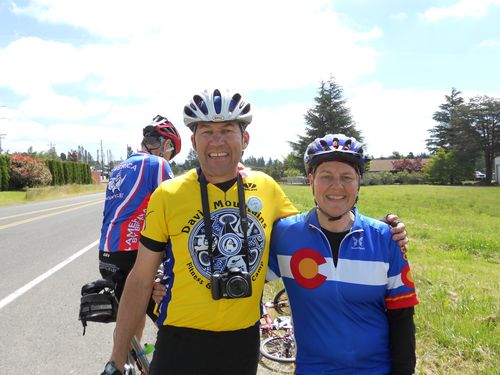 Here’s one of me and Leo — Mt Hood is in the background, but my camera exposure wasn’t set correctly so you’ll just have to take my word for it. 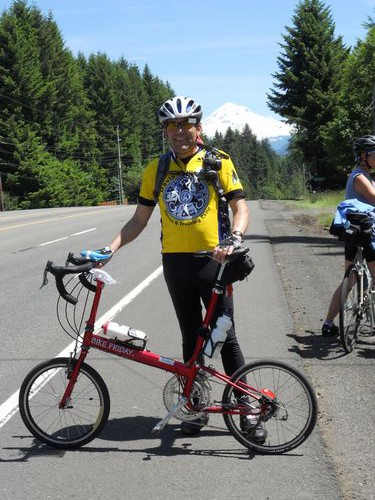 Leo and his Bike Friday, which I call “Tuesday” just to be contrary. 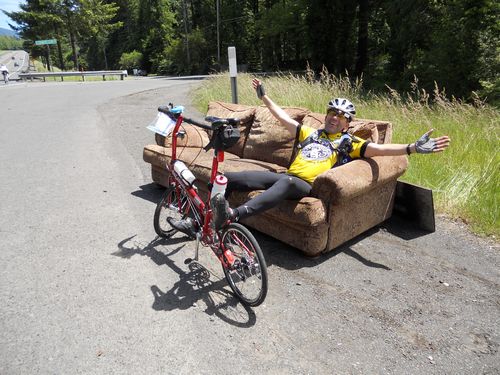 Leo is the last person who needs a couch ! But, he couldn’t pass up this one that we came across on the descent towards Welches.

Nothing like a long downhill to make you smile at the end of a long day. The only thing better is to find a luxury resort — and that’s what we did! Beyond words really — WAAAAY beyond my wildest dreams for a cross country bike tour.  Here are a few shots I took as I walked to my room after registering — 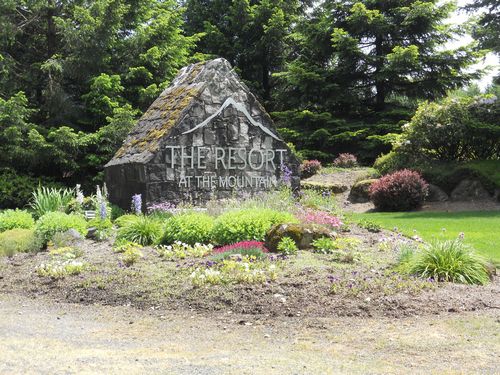 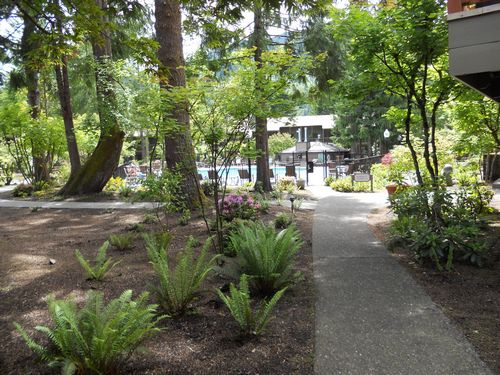 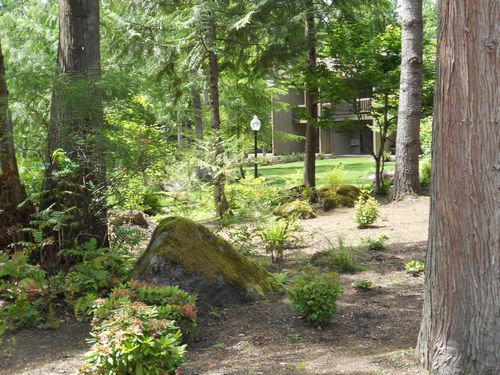 Ended the day with a short walk to a Chinese food restaurant  for a tasty buffet and now it’s time to get ready for tomorrow’s early start. We did dinner in two shifts and breakfast will be the same at a local spot. Neither are big enough to hold us all at one time.  Watching this group devour a buffet reminds me of the way left-over  meeting food in the snack area at work disappears as soon as someone emails of its existence. WHOOOOSH!