Today was almost as good as a rest day. We had a tailwind to die for and only 52 miles to ride. The goal today was not to arrive at the motel before the rooms were cleaned and ready!

Andrew’s breakfast this morning was a little bigger than is typical…but he’s riding a TANK and probably needs more fuel than most of us. I do think he ate the whole thing! For the most part, the food has been very good and plentiful.  One of the best parts is I don’t have to prepare it or do any cleanup afterwards! 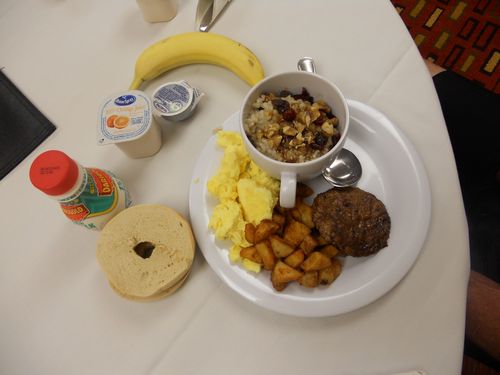 I snapped a picture of our youngest rider this morning. It is rare to see him off the tandem  – I think he was heading there when I took this shot. Matt is a Junior in High School, is super nice and very athletic. He and his dad, Micheal have only been riding their tandem for a few months. Most of their training was on “regular” bikes. You’d never know it. They make a strong team as we found out the other day. Leo and I rode the last 10 miles  into town with them at around 21 mph! 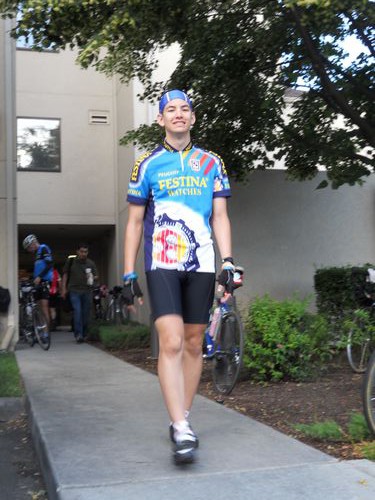 Just a few blocks from the hotel, I came upon a castle fit for my co-worker Alan and his wife, Joyce. And if they don’t want it, I think it might go well in our new Lab9 N. Not sure if we need to add more “fortification” but I’m sure Clark and his team can take care of that! 😉 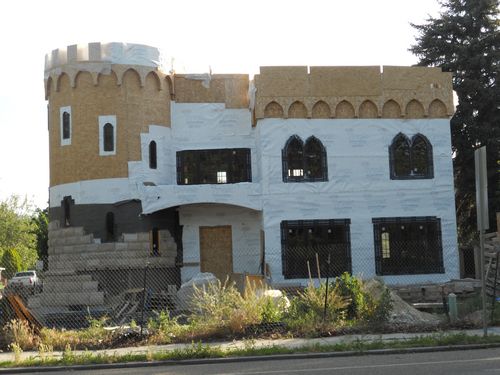 After a few turns on city streets, we left town via one of Boise’s nice bike paths. It was recently paved and the surface was as smooth as a baby’s …. well, you get the idea. The path wound through residential neighborhoods and a golf course (I didn’t stop to play today – but maybe I should have since we had the time). There was even a neat water wheel located right next to a small tomato patch. 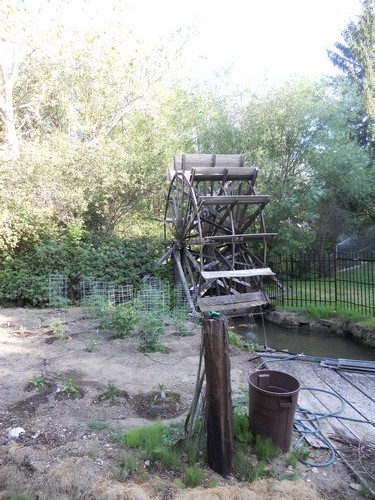 We road a combination of I-84 and back roads today.  The highway didn’t have too much traffic, and the back roads had almost none. The chipseal on the back roads got a little old, but it was worth it for the peace and quiet. The staff was right that the mood of any day was largely determined by wind and weather conditions. Well today, we all had grins a mile wide! That tail wind never let up and never let us down. It pushed us along so much that we felt like super heros on bicycles!

The wind was literally howling at our SAG stop (only one today because of the short distance). Thankfully, it was a howling TAILWIND! We lingered a bit and took in the sights at the rest area. Someone left a few pieces of farm equipment nearby, so of course, Andrew, Leo and I played on it!  That’s Andrew driving the tractor and both “boys” operating the big slant-wheeled road grader. The last image in the series is Andrew playing pony and me driving the horse-drawn manure spreader. Reminds me that this job is waiting for me when I get home! 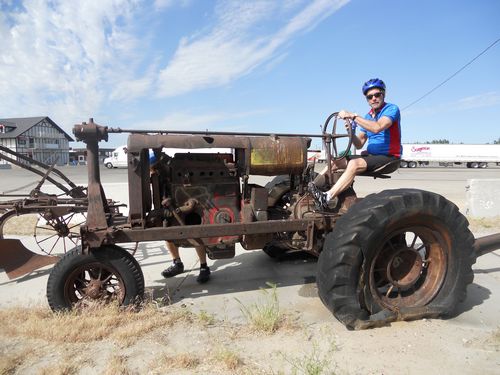 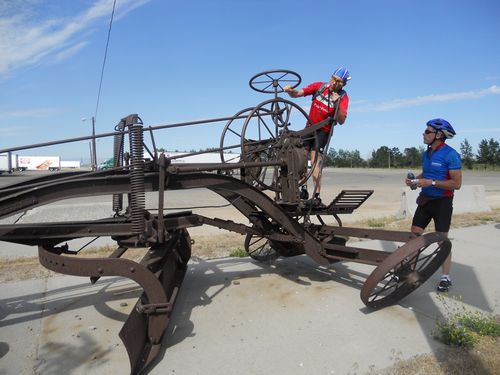 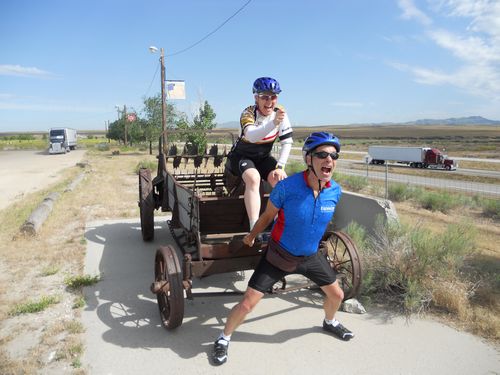 A bit further down the road we got a taste of some local humor. Someone had put this little guy on the fence at the end of their driveway. As tourist spots were a bit scarce today, everyone stopped and had their picture taken with him! I was no exception. 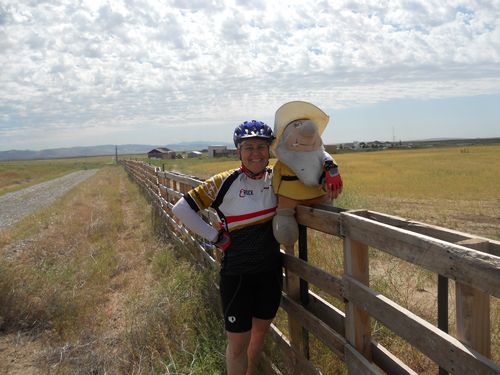 Mountain Home is not what I would call a vacation destination. There is an Air Force base here and if it weren’t, I don’t think the town would exist. The motel is nice and we had a very nice buffet at AJs restaurant next store.  I was glad that we brought our own entertainment though. Mike held a “How to change aflat tire” clinic today. I came away with a few nuggets of information that I know I’ll find useful at some point during this trip or down the road in my cycling life.  Barb, Mike’s wife, followed with tips on what to consider bringing along in your little “day bag.”  I tell you, everyone on this staff has a wealth of information and life time experience to share with us and they have been very generous in sharing it with us. I know that the folks who raised their hands during orientation as never having changed a flat will now feel confident on the road and are likely to find themselves helping others and passing the information along.

Tomorrow is an early start. We get up at 4:30 for a 5:30 load/breakfast. Hope that tailwind wakes up with us!