I flew in to Buffalo just as Sandy was arriving in Niagra Falls on Day 42.  I remember looking down from the plane, on approach to Buffalo, thinking  Sandy and her friends could be riding the roads that I was looking down at.  Thought of how, in a just a few hours,  I’d  flown over what had taken them weeks to ride. I rented a car and made the 30+ minute drive to Niagra Falls where I met with  Sandy at the Comfort Inn Suites, just a couple of blocks away from the falls. Pulled into the hotel and saw bicycle folks in the hotel right away. Met up with Sandy in time to stash my luggage and attend the 4:45 wrap-up meeting.

Everyone looks more tan and THINNER. Their tans have patterns. Brown skin turns to white at the wrists, then some interesting spots on hands, depending on the style of gloves.  Helmet straps create an interesting frame around faces. Ventilation holes make some foreheads like they have birth marks. Thighs and ankles are clearly delineated by shorts and socks. Interesting patterns, like the markings on animal coats. I noticed a few cuts and scrapes. Battle scars? Badges of honor?

During the meeting, ride leader Mike Munk mentioned that they would be finished riding in a week. Hard to believe, after all of this time. He told the group that they still had a way to go and they needed to “stay focused.” A little over 3,000 miles so far. A few spousal visitors were introduced. A couple of them were introduced as “long suffering” wives and partners that had stayed at home, holding down the fort so to speak. The word “Sufferagettes” came to mind.  The spousal units that are on the ride all seem very appreciative of the spousal units that stay home to make this trip possible.

There is an air of contentment. Meals are still a popular topic. At dinner and during breakfast the following day (today) the eating mantra is about fueling for the next ride day, fueling with protein. Meat. Riders are tired! Just about everyone is talking about how tired they are. Still gathering in little groups and talking about the things they saw along the way in to Niagra. The chip-seal gravel road that pissed just about everybody off because the gravel was so deep and a real pain to ride in. Flats. Leo’s worn-out tire. Butts are still sore…saddle sore…but no one is really talking about that as much this time. It seems they’ve just learned to deal with it.

In the foyer of the hotel entryway, an easel holds a white board that has announcements written on it for the group. Under the easel hangs a map of the United States with their route highlighted in black and yellow. Yellow for the route they still have to travel. Black for the route they’ve already been on. It’s quite impressive to look upon this map and see just how far they have ridden. Only a few states remain unmarked. Unbelieveable.

We did the tourist thing around Niagra Falls. Sandy, Leo, Andrew, Margo (CA) and I took the boat tour called “The Maid of the Mist” that takes you right to the base of the falls. Margot braved the 200ft. elevator that you have to take to get from the top of the falls to the boat launch  (she has claustrophobia) and Sandy braved the boat ride (she gets motion sickness very easily.) The falls is amazing. Thunderous. Parts of us all got soaked, even though we wore thin blue parkas that were handed to us. We were right at the bow of the boat and it was surreal to be sitting at the base of the falls, the boat rocking and rolling with the power of the roiling water, the roar deafening.  The power is evident and unbelieveable. Can’t imagine why anyone would be brash enough or stupid enough to go over in a barrel. Or whatever.

After breakfast we helped out Rodney by taking him to a Radio Shack to try to fix his camera. We saw a bike shop en route so of course had to stop in. Talked with one of the shop guys who had built a side car for his dog, Stormy, that attaches to his bike. We didn’t get to see him in person, but did see his photos. What a nice side car!

After a nap (remember, they are TIRED!) Sandy and I took a walk around the park to see the rest of the falls on the American side. The park is beautiful. Lovely, tall trees with cicadas buzzing over the roar of the water. Or the water roaring over the buzz of the cicadaes. Several viewing areas where were were able to look down to see where our boat sat at the base of Horseshoe Falls. Hard to believe we were there only hours earlier. We had a lovely, relaxing time. Indian food for dinner with Leo, Andrew, Katie and Beth (from Bouder). You’ll have to wait for the photos, as Sandy is going to download them tomorrow. I’ll be heading for the airport in the morning while they’re having breakfast.

So, for me, I will be preparing for Sandy’s re-entry back to life off of the road. Out of perpetual motion. Probalby won’t be blogging again. See you in Colorado. Beth.

Sandy here — several days since Beth actually wrote this entry. Here are some photos from our day off. All of our shots are from the American side. Here we are — as we were waiting to get on the Maid of the Mist boat — with the falls and Canada behind us. 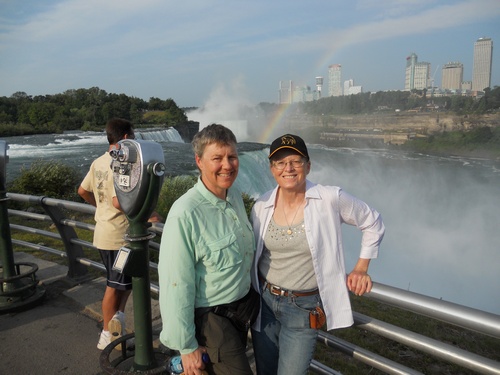 Before we boarded the Maid of the Mist, they provided each of us with a blue poncho. I got quite a chuckle when I looked back at the tent — it looked magical. Normal folks were going in from the right and blue people (like the Blue Man Group) were coming out the left side. Too funny. 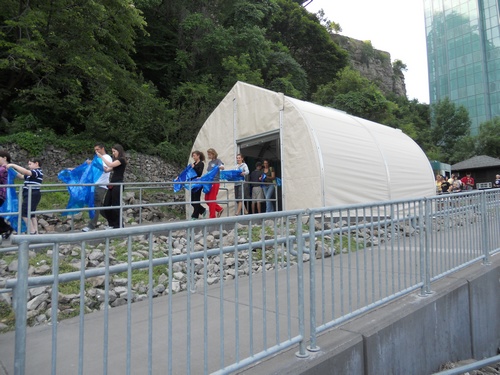 We met Erin and Brad (his sisters call him “Brat”) as we waited in line. They are about to get married and they were having a “pre” honeymoon as they traveled to the town where the wedding is going to be held. They were a lot of fun — sure wish I had a picture of them after we went thru the mist too. We all looked like drowned rats. 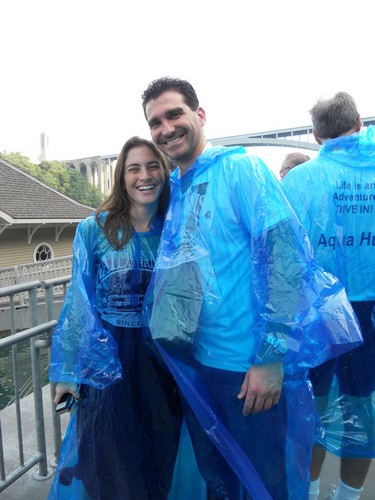 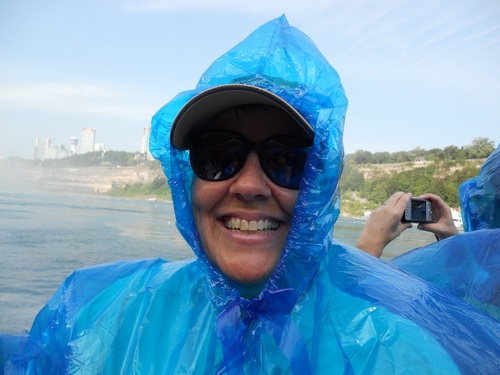 Here’s the Canadian boat coming back. We had to wait for them to get out of the way before we went closer to the Horseshoe falls. 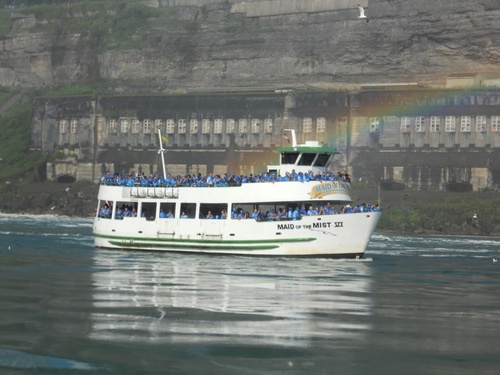 I risked taking the camera out when we were pretty close — couldn’t face the center without getting the camera soaked, so I took a shot of Beth with the shoreline behind her. The falls were THUNDERING overhead. You could hardly hear yourself think. Reminded me of when they were building out our labs at work a couple years ago. 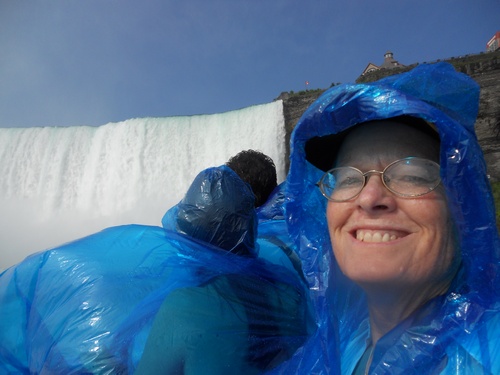 We walked all along the American side of the falls. It was very relaxing and it was not nearly as crowded or commercial as the Canadian side. It was great to be able to be with Beth as she saw the falls for the fist time. 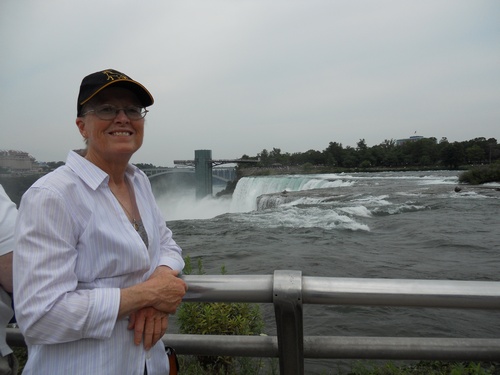 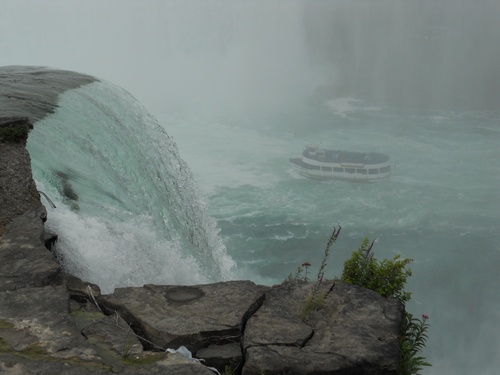 As my parting shot — can you tell which room was mine? 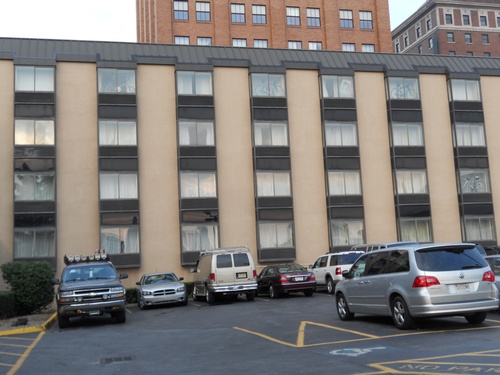